Recently I've been browsing around for antivirus programs to keep my crappy old computer intact or possibly reinvigerate it until I can scrap together enough money to build a new one. Since most antivirus programs can be bought for several computers at a time, that's not an issue.

What I've found is that some of these (specifically Norton) have features along the lines of "undeleting deleted files". I dont like that sound of that. While I know your registry may point to files that no longer exist on your computer and that temporary files may exist on a computer after its permenant counterparts have been removed, what is this "undelete files" feature, and why is it possible? Is there a way to ensure that I can delete files permenantly and leave no trace. I need as much harddrive space as I can get, and I don't want indie game temp files getting in the way of that.

Set the recycle bin size to zero or set it to instantly delete instead of saveing the file to the bin then there will be no backed up place to get it from. BUT this only realy works if you have windows back up disabled as that will store files there. 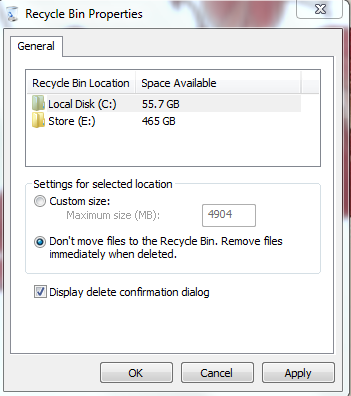 Does deleting from the recycle bin permanently delete files too, or does the Windows Backup keep those temperary files unless the recycle bin immediately disposes of them?

There are allways temp files stored on your computer (back up will allso save them) i use a program called ccleaner that i run every 24hrs that removes temp files,trash the os has colected and web browser cache files called ccleaner ( http://www.filehippo.com/download_ccleaner/ ) that can remove any extra junk the os colects.

Well data on a harddrive will never be deleted entirely, its still on there till its getting overwriten from other data. ☺.

Yep there are still trace's of data on hdd's that can be recoverd useing the rigth softwhere the only way of removeing or killing them is by doing a extreme low level format like a 35pass wipe of the disc and even then it has been known you can still get data off them.

This is why i advise people when i replace hardrive's for them is to format them then hit them with a hammer antill the inside plate's are broken and dispose of them.

Those fools! Why didn't they use 36-pass wipe! When will they learn!?!?

Because windows works with an index ☺ if you delete a file, only the location in the index will be deleted the file is  theoreticly still on the drive, only not anymore in the windows index. so windows sees it as  free rewritable space., it will only be errased if the file gets over writen by other files.

Format is a bit the same, the only thing what a format theoretical does, is writing a new index.

That a bit how it works ☺

interestingly the hdd isent the only place you can retrive data from.

You can pull the ram sticks and get saved data from the last time thay where used this process of finding data has been implemented by governmental agencies for around 10years such as ICE who go after file sharing pirates.

Pulling encryption key's off the ram to unlock encrypted harddrives to access them.