I’ve built a new home server to replace my laptop and after setting it up for the first time it drew about 25watts of power from the wall when idle, which was very respectable. After that I got some networking issues in Windows (NIC wouldn’t start). Trying to fix this I firstly updated the bios and than windows itself (didn’t install/change much). Now it idles at 60/50 watts? I’ve gone over most bios settings to check since everything was reverted back to default but I’m pretty sure nothing changed. HWmonitor reports 880mhz when Idle and 2/3 watss consumption so it must the something in the motherboard.

What have I done so far?

I’ve reinstalled Windows, cleared CMOS everything, It’s driving me nuts. Can’t flash old bios back due to security risk so Gigabyte stopped support. What are settings I should really check that can have a big influence? In CPU settings everything related to lower power consumption like speedstep and RtH are enabled. Furthermore I’ve disbled the mobo LED, disabled audio chip, enabled platform power management and disabled any enchanced cpu power stuff. Dummy loading is also disabled.

I was so happy how it was at first, it performed to spec when stressed and afterwards dropped down to 23watts idle and now it consumes much more, not ideal when I want to run it nearly 24/7.

I can throw in some doubt and a thing to try.

Can you try doing this a few dozen times:

I have a similar issue with my new home server and I am pretty sure there is nothing wrong with the PC itself.
Not 100% sure but It’s seems like it’s just the power meter doing a shitty job.
Just restarting many times is enough to make the power meter read almost 2x power draw sometimes. (And no, the measured power factor isn’t changing - so that’s not it)

At first I also thought a bios config I toyed with was the issue but it was just a coincidence.

TL;DR:
It might be just your meter. Try re-plugging many times to check if the power consumption really stays higher.

I’ve tried it but doesn’t seem to be the case, unfortunately. I’d wish I could downgrade the BIOS again but Gigabyte blocked this.

I’ve read that other Gigabyte owners were able to be downgraded their version using flashback (I think Gigabyte calls it QFlash plus). 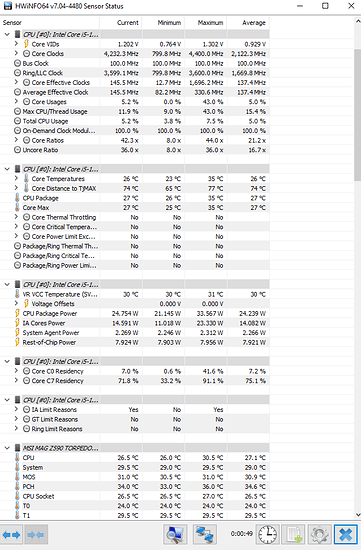 regers to an 11400, but same chipset, same process, you may have the same settings to tweak in the bios …

25W at idle with two HDDs and one NVMe looks on the low side, the HDDs alone are probably pulling 8W, the NVE another 3 … but from 25 to 65 it is really a big jump …

Could you try running hwinfo (the same tool in the reddit) and post results? At least we would be able to validate your kill-a-watt readings …

The hard drives are set to stop spinning after a few minutes, always measured when they were on standby. Taking in the low reported CPU power draw + drives in standby + ram I can’t think what component is pulling the extra power. Even the fans are stopped at this state (Although CPU fan is on, I doubt if I should enable fan stop on that one since its a stock cooler.)

Well, 2W for the proc package is really low … and the kill-a-watt was reading 60-ish?
I would try disconnecting everything (USB/non boot drives, network) and measure … then add one component at a time to see if it makes any difference …

No USB devices connected, drives in stand (so not spinning). But worth a shot

Do you have any way to try another power meter (amazon - 30 days) ? … just to rule out the possibility it’s the one going bonkers …