This is for my friends dad who is an audio engineer who is mostly fixing audio equipment - mixing desk, amps, guitar pedals, boxes that make crazy sounds etc. this is his requirements.

His current pc is win7 Dual core cpu with a AGP graphics of some type so it's really getting on but still dose the job - just tad sluggish - it's Antec 180p case with fans all set to low, so that's a good reference for sound levels - he will be keeping the old pc in tack for easy of transition, so can't re-use any parts sadly *expect for the [email protected] sound card - the Antec 180b/p is still quite a good case even tho it's 10 years(?).

Graphics info is here, should be fine, skylake with USB 3.1 might be a decent option, but that would mean getting a new sound card I guess.

While it dose say it'll do 4k over HDMI it doesn't say if all three outputs can be used and also with total desktop size will it still run well enough? I would not be surprised if it's total max desktop size is limited to 4k~ so that's what I'm worried about. Tho it fails I'll find GTX 750 ti laying around use that but I'd rather not blow the budget

This CPU having a TDP 84 W which is close to limit of passive coolers but there is one via Noctua that will do the job - But I have seen a similar system in Phanteks Enthoo Evolv Micro Tower Chassis before it was whisper quite with stock intel cooler - that case is really good easily worth twice the price IMO - design brilliance and manufacturing quality is beyond anything in it's price range by far.

This would be my take on this. Couldn´t find any gaming cards in this price range that support triple monitor setups this well. 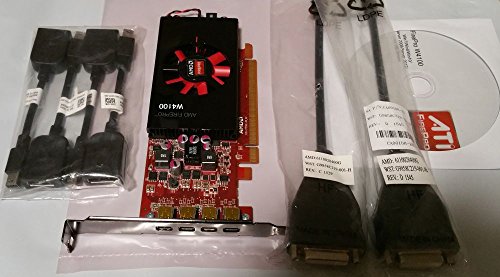 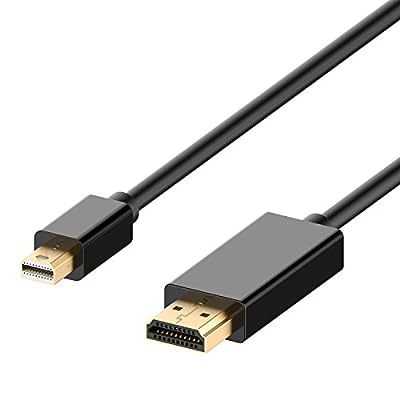 I'd say go AMD. Now, granted, AUD prices are all kind of fucked up -- or so I hear -- but you're spending nearly $300 AUD on a processor. You don't need to spend that much. According to DuckDuckGo, that's just over $200 USD.

If you wanted to give him more horsepower, @GrossCarbon 's recommended Firepro is a great option. And, with $60-80 saved from my suggestions, you could jump to it with a very small budget increase. However, there really isn't a good reason if it's not going to get used for anything other than triple displays.

Instead, I'd suggest getting him a better SSD. And please make sure he knows the difference between that and a traditional HDD, maintenance-wise.

So atm 100 Australian Dollar equals 71.50 US Dollar + we have what is know as "The Australia Tax" which can be 0% to 400% but for this example is generally this pc will cost more here and while could get cheap by buy overseas and shipping the end savings isn't worth the problems of RMA.

Spending lots on the CPU as that is also the GPU thus saving money on buying one BUT - also leaving the option of upgrading it at 5 years for a "new lease of life" - when 12gb titans will be had for $200 hehe.

Also CPU being the GPU will use up to 2gb RAM so I wanted 16gb, and 16gb is so cheap no point messing around later

BUT if i was go with GPU I'd get cheaper CPU and probably only 8gb ram as that's all left to the system then, but 16gb... I think in 5 years will be standard - thanks to MS bloatwares.

By better SSD what would you recommend - around the same size and a few more dollars are ok if there is noticeable deference in speed but note this Audio guys current comp is using like 60gb or 80gb - also I've gone DDR3 - I figure with it's cheaper price point on it and related hardware that''s was good comprise for value, but that could be the bottle neck of this system.

I'd like to order that part from Australian companies for RMA/warranty so that dose limit selection - example there's only 8 places in Australia that sell the li lian case in the x99 build video O_O - I love that case btw.

Pretty much limted to https://www.pccasegear.com/category/210_902/solid-state-drives-ssd and place called MSY which all Aussie tech ppl know of - it's almost always the cheapest but they hate taking returns of any type and there PDF pricing page often has virus encoded into it :/ but they are the cheapest no link because viruses :)

Best I could do: http://au.pcpartpicker.com/p/rQxB8d
You would have to remove the PSU from the list but that is basically it. You could go 1x8GB on the RAM.
@EliteLurker I could not find any GPU that had native triple HDMI-outputs.

you're going to need a GPU, I would go for a GT610? no fans, or something very low power and set the fan profile to be ultra quite.

also go for any decent heatsink and slap some cougars or noctua's on them.

CPU wise... he's not going to see a performance difference that justifies the "Intel Tax." Not with his usage of the system. That's why I suggest AMD on the CPU. Unless you are gaming and need absolutely top-end performance in the latest titles, while also streaming or recording, or unless you're video editing, things like that, it's generally better to go AMD. Why waste even fiat currency?

GPU... Unless things have changed, because frankly it's not the kind of thing I check into often, most iGPU-socket mobos won't actually do 3 displays. You're lucky if you get two. Again, want to stress "unless things have changed" because it's possible they have. I know for a fact that my ASRock FM2+ (APU socket) mobo will only output to DVI or VGA (the two vid ports it has) but never both. That's one of the reasons I upgraded to discrete quickly after initially building this rig. He really does not need anything over $100USDish for discrete. In fact, you might be able to find a $50 or $60 AMD card that'll handle three display outs, and still give him more performance than he needs. No promises though.

As far as using the system memory for the iGPU, that's a point. Now he probably wouldn't notice *but he might. Especially if he he routinely has many open browser tabs. Probably going to get better performance out of a cheap discrete though. And if it means getting a better price-to-performance CPU, that's win-win, isn't it?

SSD... I'd go up on storage and down on RAM. He's just not going to use the RAM, and he might use the storage. Probably not, so it's more or less safe to stay at 250, especially if he's not particularly unhappy about his current ~80GB solution.

As far as MS bloatware... yeah, no. I expect there'll be massive migration to Linux, at least in the private & personal sectors, in the next 5-10 years, so long as MS doesn't change course.

One last tip: Never buy from anyone who is willing to try to infect your system, no matter how cheap they are. It's not worth it.

@CrossCarbon very alteravtive build I like it - only needs one hdmi for the 4k tv - the other 2 outputs can probably anything dvi/vga/hdmi/dp 1080p capable.

@thedmbarlow "Intel Tax" yeah my main reason for Intel is that's what I've used since 2007 and know, I also use UE4 stuff which doesn't like amd as much so I have bias for Intel and also notice the 4460 did quite well in same games at 1080p full sittings and - I mean well for iGPU and well compared to budget budget gaming card. And my estimate was about $70~ saving form normal CPU+GPU. "unless things have changed" yeah they seam to but still not 100% sure on how far they have - I wouldn't do it if it was going be any proper gaming PC - but while this guy is_ unlikley_ to use this pc to game or really do anything other office work... he is a tech head like us and did love doom and duke3d over modem back in the day so maybe I can talk him into a 980ti and VR next year etc - the option is open for this pc as the cpu is fair strong(right word?)

He's seams very sure that 250gb or as told him it's really 200~ GB of usable room would be more then he'd need ever - he has a NAS but it's really back only.

Your word choice was right, I think. "fairly strong" is I think what you meant.

Here's something to think about: I am currently running an overclocked AMD dual core and haven't had major issues. I'd like to upgrade to a dual core, but it's not enough of an issue to make that upgrade a priority.

Well as it stands he could probably get away with repaceing the current hdd with a sdd and he'd probably be good for another 2 years - but I think he feels it's not worth the mess and that it's time for a full upgrade - think the gpu he has is radeon 9800 which iirc was pretty dam high end pricey as #### lol I think I had a 9200 around that time.

If you're worried about the display set up then ya throw in a cheap GPU, or go with an APU if CPU performance isn't a main factor, but the intel integrated graphics should be able to handle 3 displays, a kaveri APU can do up to 4 displays.

@CrossCarbon
They actually made a 7750 with 6 display port outputs, same price as the workstation card though
http://www.newegg.com/Product/Product.aspx?Item=N82E16814129274

A Geforce GT 730 DDR3 x64 or GDDR5 is the least expensive Nvidia card ($70 USD) that will drive 3 displays and do 4K. The 64 bit version is actually better than the 128 bit one. For a long time it was the Tom's Hardware page recommended entry level GPU. 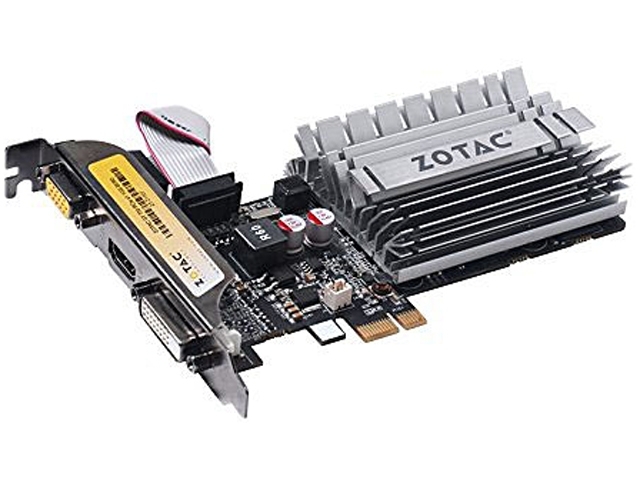 I am currently using a Thermalright Macho Rev. B ($55). A huge CPU cooler that can be used without a fan. I would suggest getting the optional duct ($10) between the heatsink and the rear case fan. The duct helps a lot but I had to slice it in half, and shorten it from 5 ribs to 3 ribs to fit in my case. I removed the center rib and sliced the CPU half at N-S-E-W to fit over the fan half. Once I did that it was easy to install. 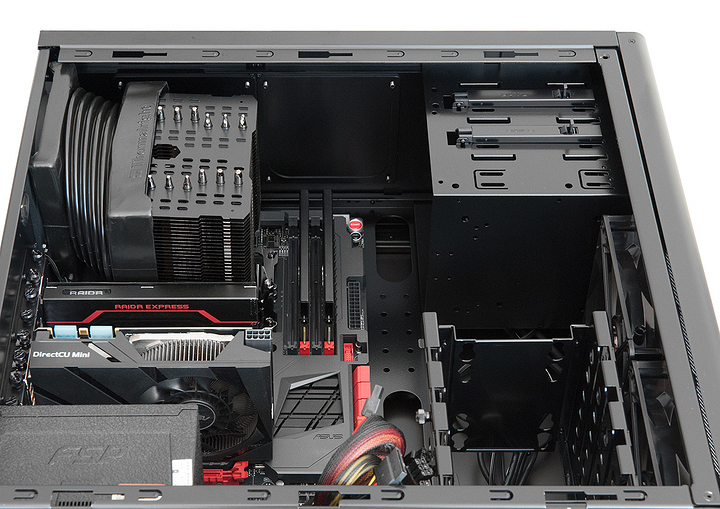