Pc for a teacher

So today in class my teacher and me got in a discussion on pc's and he was talking about how he was in need of a desktop and i said i might be able to help. He said he only needed it to be fast and be able to browse the web with lots of tabs open and make documents and hold his large itunes collection. So i could pick out some hardware but im used to picking out hardware for gaming not general use so i don't know what to pick because i want to pick something that will last a long time and be the most inexpensive it can but also not be too cheap.

How big is his "large iTunes collection"

A haswell i3 perhaps.  8GB of ram.  Micro atx case, nice power supply, optical deisk drive, and then I think that would be good.  Intel 7260 for reliable WiFi.

I'm currently on mobile and am too lazy to put up a PcPP.

That's ok and he stated that he wanted a 1 tb hard drive and he said he was ok with having two different drives he wants a ssd.

Grab a cheap APU bundle ,4GB of ram,a good psu ,a 2 tb hybrid drive, and a basic case and wireless card if needed . and BAM a good average run of the mill PC for the fairly basic user and cheap. thats what i built my mother and shes a teacher with the same needs as your teacher.

Theres no real need to go to the X-treme with the build it's a simple PC probably under 500$ I'd estimate.

advantages: it will overclock extremely well, it will be virtually silent, it will be faster then a lower end APU and beat the crap out of a i3, it has the Ram to muti process for any normal workloads, its less then 500$ USD.

Use this a template of sorts, oh and, If you are not going to overclock at all you would be better off with a i3.

why are you getting the bitch a PC?!

I suppose this would suffice LINK

Although the actual power draw is questionable. I put all the parts into a PSU calc and it shows a minimum of 90W for a power supply. I guess you could step it up to a i3-4150 if you think the 2 extra threads would help.

I suggest this case mainly because I have built a couple of PC with it and the included Vesa mount hides the PC behind the monitor. Its quite a tight fit.

If you are going to build in this case I would suggest removing the Pico PSU and then installing the hard drives (with the sata cables wired and ready to go including plugging in the sata power cables), then motherboard (RAM/CPU installed) then finally replacing the PSU and plugging everything back up.

I don't like any of the builds here so far.

It may not be the best, the only thing is the case, but it comes with a nice power supply and is pretty good looking imo. And sorry for only using amazon, its just my favorite place to shop.

*edit failed on motherboard, wifi isn't a must, but it's nice to have. 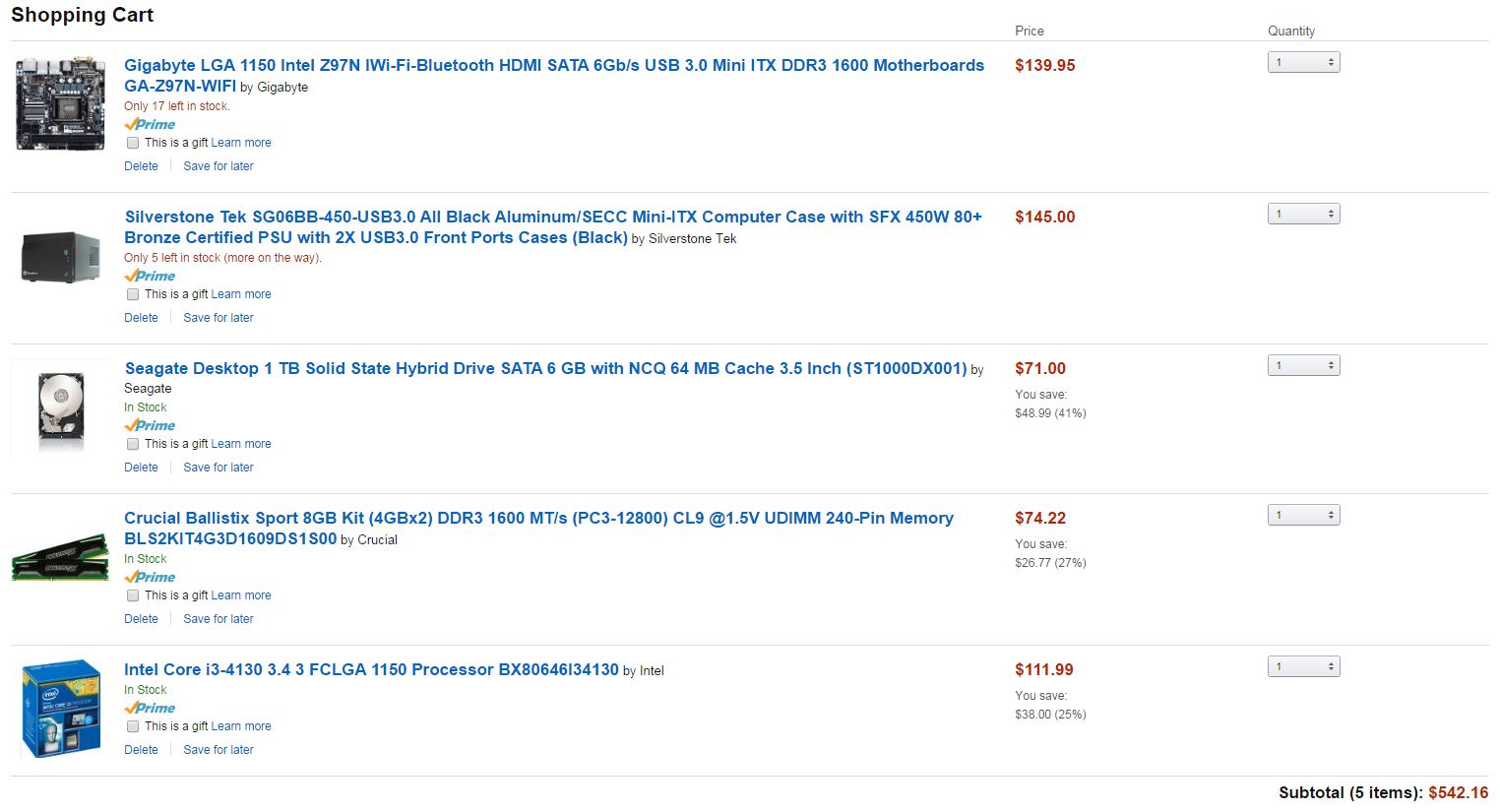 Still would be easier if I had a budget to work in, but that's what I'd build.

^ this should work the not the cheapest but the a6-7400k apu should handel multiple web browser tabs no problem also when it comes to converting video amd VCE can give better quality at a smaller file size then intel quick sync. at least by most tests.

the Intel 520 ssd has a 5 year warranty and the case is not only good at silencing but has a sd card reader built-in. the lite-on dvd drive should be able to make full use of image burn.

Although, deejeta has a very solid build made there.

Sorry to be boring but do not build him a computer, if something goes wrong with it in the future it will come back to you. And if he cannot contact you when it does break because you have left the school where can he return it to?If he does not build it he will not know how to find and fix a hardware fault by himself.

The best thing you can do  is recommend him a pre-built desktop from a shop, then he has somewhere to return it if it breaks without having out of school connections with a pupil. Of course all of this is only relevant if he is not going to build the computer himself.