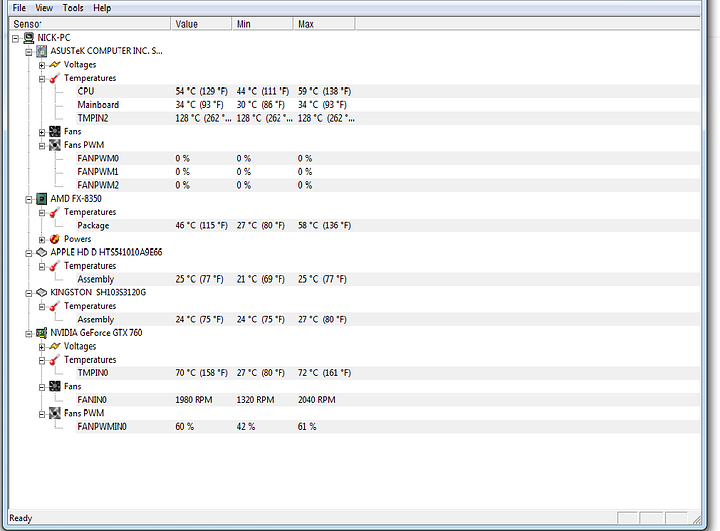 I am using the stock fans and heat sink for my evga 760 and fx-8350 in a corsair c70 case. Those temps were from 10 mins of far cry 3. Is this normal for a computer? The heat sink fan sounds like a blow dryer.

Those temperatures don't look too bad, if the PC isn't new it could be dusty (behind the fan, in the heatsinks) which can make a big difference to cooling and make the fans spin much faster to try and keep the components cool making it noisy. If not then I suspect it is the CPU fan, can you tell what fan is making the noise, i.e, forcing fan speeds.

Temps are pretty normal... If they start to head north of ~80 degrees celcius on your CPU then I would start to be worried and look for a solution, especially as your fans are running pretty hard. Far Cry 3 is moderately demanding though. You are very unlikely to damage your system by overheating these days. Especially as you're not overclocking your system.

I recommend aftermarket coolers to anyone as they cut down on noise and heat, even at low speeds. The stock coolers from AMD and Intel are rubbish. On the cheap, the Coolermaster Hyper 212 plus is a solid performer that won't break the bank.

Not sure if it helps, but I found an AMD install video that appears to be French... It has English subtitles and good shots of the install. May not be the best out there for your needs, but it may help
http://www.youtube.com/watch?v=gCSnezosJfQ

I got the evo installed but my evga 760 is at 150F. It was overclocked from the factory.