Hey guys, I posted about a week ago about my computer which was frequently crashing and giving one long and three short beeps as a beep code when I tried booting it . I managed to fix this by just reseating all of the ram and the gpu

This morning it crashed again however the beep code now is one long and four short. I've reseated everything like I did last time however it's still not working. I removed the gpu and both sticks of ram and tried turning it on and the beep code it gave me was just a continuous string from beeps.

Should I RMA my parts or can I fix this? I'll post my specs in a few minutes

What motherboard is it? Also refer to the motherboard manual as it will have what these beep codes mean.

My full specs are:
Asus m5a97 LE R2.0 mobo
msi twin frozr gtx 660
amd black edition phenom 2
corsair CX600M PSu
2 x 4gb corsair cms3 ram
I might be blind but I can't find the beep codes in the manuel. I've been looking it up online and it is supposedly either a memory issue, motherboard issue, graphics card issue or something wrong the with the cpu fan... Its hard to pinpoint what could be wrong since it still gives the same beep code with different ram and with the graphics card removed.

What is the current beep code? And which slots do you have the RAM in?

Beep codes are in Morse.
Heres a reference to all motherboard beep code problems. Better to figure it out first before you RMA it. Good luck

Additional, try cleaning out the all slots with an air duster, then reseat everything once more.

This is a common problem of PC not booting up after air blowing them.

Well, the only details you're getting out of that beep code is that it's a "Hardware component failure". You got a long and three short beep code recently, too, I see. Try reseating your GPU. 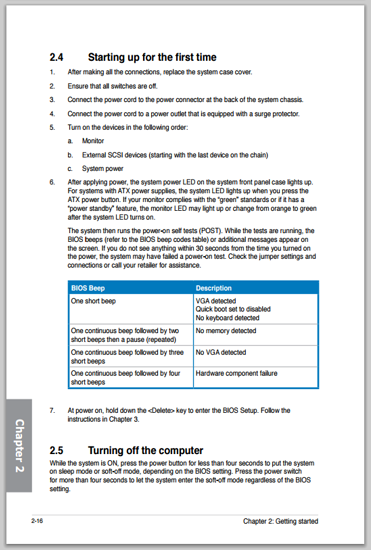 Any who. Seeing as your last code was a general "hardware failure" but the one before was a VGA issue i'll just run steps.

Then tell us what it does. PS. As you will have reset the CMOS, you will need to reconfigure your settings within the BIOS.

Thanks for all of the replies guys, but I think I found the problem. I found an old graphics card and swapped it out for my 660, and now it's working fine. I plan on RMA'ing my 660 but I'm not entirely sure if my warranty is still up.