Short ver: Have a Dell branded 2.5" P3700 400GB NVME drive I am trying to update to the latest firmware. Need help finding a way to do it. Don’t really care about breaking as I am about to throw it through a window.

Long story:
I need vSan training and decided to build a two node cluster with a separate witness. Digging through my eBay impulse purchase pile I found two p3700 that I never got around to using. The first is a Intel retail drive while the other is a Dell OEM drive. I didn’t realize that I had purchased a Dell OEM drive or the thing would cause me so many headaches later.

Anyway I used Intel Intels SSD Data Center Tool to update the first drive without any issues. The second drive refused to and it keep giving me the massage that

No Known update for SSD. If an update is expected, please contact your SSD vendor representatives about firmware update for this drive.

It didn’t take me long to realize that I had a Dell drive. The things look almost identical at first glance. Well I went down the rabbit hold and found that Dell never release a firmware update for the drive. They only released one for the PCIE slotted card version of the P3700 (HHHL?). On a long shot i still tried it and it would give me the same error as above.

Now I could give up and just use it as is but I hate seeing that error in vCenter saying I need to update the firmware on the drive. So I started looking into alternate ways of flashing the drive. fwupd is interesting but I can not find proper firmware files for it to use. Their are articles on how to manipulate firmware on other brand drives (Seagate, Lenovo, etc) but I haven’t found anything usable for Intel branded drives.

Does someone know a way to extract the firmware off my Retail Intel drive? or force the firmware to flash on my dell drive? I am not afraid of breaking this thing and willing to do experiments on it.

Here’s a starting point for you. 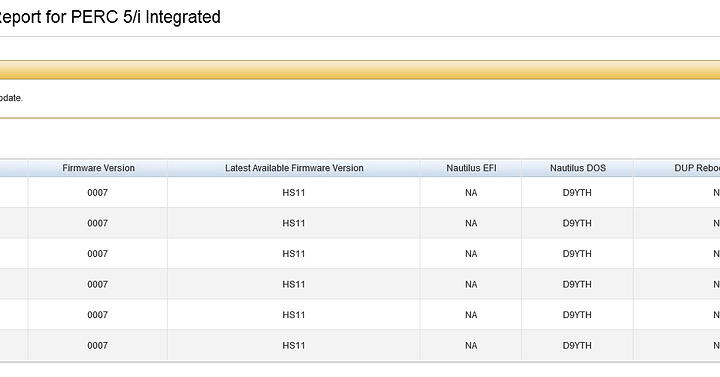 Hello, I am building a server for one of my small business clients, it's a Dell PowerEdge 2950 with a Perc 5i RAID controller on boar...

Perhaps, editing the OG Intel firmware by including the Dell-specific PCI ID of the drive could work?

I saw that guide but their are some issues. It looks like the Intel is doing something funny with how it recognizes the firmware. Its beyond my skill set to figure out how.