Only 1 percent of “up to 76Mbps“ customers actually...

Virgin Media is better at hitting advertised speeds, but ADSL/VDSL ISPs are bad.

There really needs to be more accurate advertising. 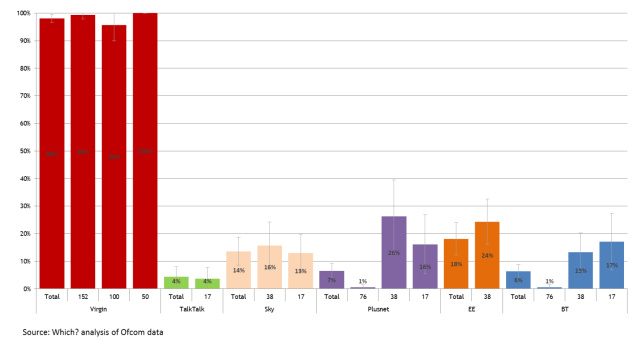 That figure doesn't surprise me at all. BT is running mostly of infrastructure from the 80s and their new fibre is stretched so thin and still basic that the network is just saturated. This is why my family uses Virgin Media, our 50mb/s is pretty reliable and much cheaper than BT

So, basically the same situation as in the US. Sadly unsurprising.

The problem with BT and their "76Mbps" Package is it is marketed as their "ultimate" package (mainly it includes TV, phone, bandwidth with no cap) and is available on ALL line types. Yes my parents have this package and they are on a DSL line that can only achieve 3-4Mbps.

The other telco's are much more reasonable in their marketing and Virgin actually rolls their own cable infrastructure and only make the speedy packages available to the customers who can actually achieve it.

crap like this makes me think nvidia's push to go big in streaming is doomed from the start.

And it's all down to cable company f*ckery :D

I still find it puzzling at just how many EU countries use this up to xx speed bullshit. Plus you have datacaps.
If you ask me, they should only be allowed to advertise and sell you things you actually get ie 10up/10down you should get that all the time. Also, only mobile can/should have a datacap.
I mean, I live in a small, a bit screwed up country, but when it comes to internet, what they tell you is what you get.

This is the UK, only Virgin is a cable company. The rest are Telco's and deal with bandwidth provided by DSL, Fibre or 4G.

It's not really "fuckery" (well it is) but it came about because of the quite sudden push for high speed internet. Most of the UK is served (non-city locations) by DSL connections. The fuckery begins when BT neglects to upgrade a local sub station exchange for about 10 years that was already struggling and adds another 40 connections to it...... :/

We don't really have an issue with data caps (in the UK), not to the extent that the US suffers from it. Sure BT lowest package has a data limit and Virgin operates via "Fair usage" (around 500GB a day in my testing), but it's rare I see something like "100GB usage for the month" unless its on my mobile.

Well, I was looking at ISPs in the UK a few days ago and a few had datacaps. Can't really remember which ones, but at least 3, 4 different ones. Virgin seems to be the best choice from what I've seen, but they don't cover the whole of the UK. 500GB per day is more than enough, what I saw was along the 150-250GB per month lines. Also the speeds seem a bit weird. But that could be just me being used to what we're offered here.
Don't take this as an attack, it's just how I see it.

lol have you heard of the the large land mass that you threw prisoners in? oh i think you call it australia?

advertised as adsl 2 '+' 21mbps. never seen higher than 6 in my life.
adsl is enough they said, you dont need higher than 21 they said. fuck fibre they said.
well then give me my fucking 21mbps you scrooges!

ps first time i saw what a fibre connection could do it blew my mind!, maybe someone should let people experience this. it would change everything!

All companies but Virgin rent the network from BT, that is why their performance and plans are all so similar. When if you look at Virgin the speeds are better, the reliability is better and the price is lower. The only issue is Virgin doesn't cover the entire country yet

I guess I'm in the 1% - my connection speed is constantly above 70Mbps, usually 75Mbps or just over. But no, I don't live by an exchange. However, I use BT Business broadband so this may be a moot point.
My connection has been damn near bullet-proof (if you've made me jinx this...) and, by comparison, my friends and family members on Virgin Media have had issues ranging from inexplicable slow-downs, throttling and connection loss. The actual connection itself can waver from pretty much anywhere. Sure, it's not constantly occurring but it is enough to be brought up in conversation.

Because Virgin Media deals with so many people that just have no clue their tech support goes from first line through to... first line. You start with turning off the modem/hub/router (or whatever they want to call it at the time - currently a hub) and waiting for two minutes before turning it back on.
The length of time to reboot the router/hub/modem has increased over the years; it started off as 10 seconds, then 15, 30 and a minute and, the last time I looked, it was 2 minutes. It's such a common occurrence with VM that they took to including a removable on/off power switch on the power cable (and, if I recall correctly, it's no longer removable with the later models).
Escalating up to step two of the first-line support, if you have connection and it's just slow they advise you to disconnect literally everything from the Internet except the one device that's currently testing this out and it should be hard-wired. If there's a router, switch, phone, second laptop, etc, etc, connected well, there's your problem. If you are, in fact, using one device (as per aforementioned configuration) well, then, there could be any untold number of things slowing you down - busy time of day, firewalls, the planets are out of alignment...
If you do actually know what you're doing and you scare the crap out of the first line support you could get them to bypass the first couple of pages of their script and check the line but, if they can't fix it, they'll send out an engineer at some point in the next X amount of days.

Thus far, I've had one problem with BT (touch wood) where the DNS was out for most of the country. I made a temporary fix whilst waiting for it to come back up, whereby I changed the DNS IP on my router to point to a public DNS.

Would I consider going over to Virgin Media? Well, possibly, though I'd be weighing up the value of changing to a faster connection, the service provided, giving up free BT Wifi... I'd probably go business broadband again for the reliability and service.

Of course keep in mind the virgin media part of the graph completely ignores the people who cant get cable with virgin media. So.. of course almost 100% of people with cable get cable..

Not excusing the pretty bad copper BT use. But the graph is mis-representing virgin media. (in their favour)