One raspberry pi and I'm already hooked on homelab

This is my first time post but have been a huge fan of the guys from level one. I both share interest in all things Tech as well as being a former central Kentuckian (Garrard/Madison Co) as well.

Okay now to get what brings me here today. After purchasing a Raspberry pi 3a+ for pihole and another 400 all in one for the kids I’m starting to get hooked on all things homelab. To the point I just purchased an old Dell R620 to further my understanding in things like containers, VM, networking and so on. I’ve been a long time Linux hobbiest from the days of Mandriva, Slackware and Fedora Core. As of right now my poison seems to be mainly Fedora on my Desktop and Thinkpad L13 Gen 2 and debian on my pi’s.

So my question to the forum is what are some ideas for my new server thats on the way? I’m thinking hypervisor to do some distro testing/breaking , containers, and mainly hobby stuff so wiping it all clean and starting over won’t hurt to bad… along with other things but I’m still debating on my best route of getting there. I’m still on the fence as far as using VMware, Redhat virtualization or something like openshift.

I feel that I’m fairly tech savy all though that isn’t my day job of (HVAC/R) but I would like to get to the point in life where my career aligns more with my hobbies which are mainly tech based. Been leaning towards automations and development.

Self hosting is a thing among the Homelabbers. Getting your own Google Drive alternative via Nextcloud is a good way to start. People also like to keep and stream their legally bought DVDs via Emby/Jellyfin/Plex.

Since you’re into hvac, home assistant , esphome, node-red, prometheus might be fun to get into.

Kubevirt seems to be all the rage these days, instead of VMs hosting container nodes, putting Kubernetes on bare metal and scheduling VMs across a fleet same way you schedule containers - like pretty much all hyperscalers do.

I would look at whatever hyper visor your comfortable with and then just set up what every your interested in on top of that. For example run Redhat virtualization in a few vms on top of vmware, if its for learning/labing

For your Pi, Home Assistant! It can also run Ubuntu Server nicely with a little tweaking. Home assistant is a universe of things. You will never run out of things to play with and setup with a HA install.

I think there are a few good options out there, but there is a free license avaliable for ESXi which is what I have been using on a server to host VM’s. It is amazing what can be done when you can spin up/down systems at will. It opens the door to experiment, most of the time with out any fall out.

I say, the biggest thing that you can get into right now is home automation. Unlike most projects, it is ever changing as you find new things to automate, which will force you to learn new technologies and new skills. Unless you plan on going into the Tech Industry personally, I think home IoT will be the biggest bang for your buck as your skills will grow as you tackle new project which directly benefit your home and those that live in it. 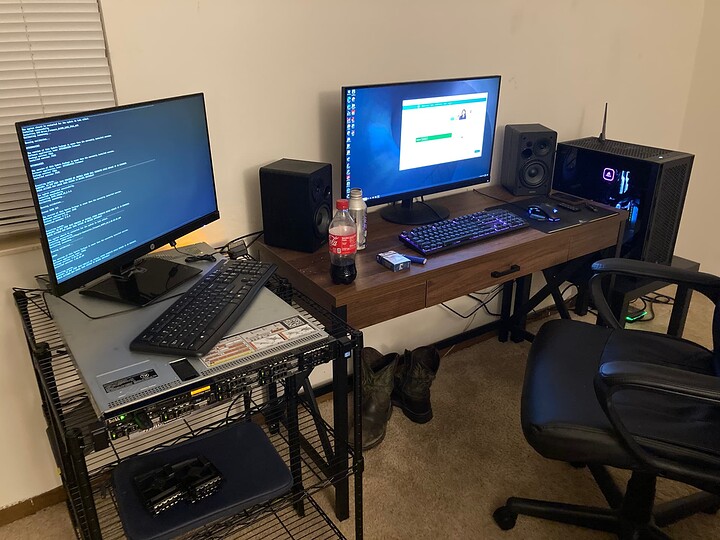 In the words of Wendell it’s fine😁

To the point I just purchased an old Dell R620 to further my understanding in things like containers, VM, networking and so on.

Consider proxmox then … debian based plus KVM plus docker containers … and you can run nested virtualization as well …
As for home automation … +1 for nodejs-MQTT-and whatever home automation software may peak your interests ( I use openHAB, but YMMV) …

debian based plus KVM plus docker containers

Proxmox uses LXC containers, not Docker. Doesn’t mean you can’t run your docker images, you can always install other packages yourself or use e.g. nested virtualization to get Docker images running.

I’m totally fine with all the LXC templates offered/linked by Proxmox for my small homelab. But if I ever need Docker, I’m pretty sure I can make it fly within 10min in the Proxmox GUI with nesting.