I have an ancient flat panel monitor, the Dell Ultrasharp 3007WFP. As a monitor it still works perfectly, though the built-in USB 1.1 ports are shot to heck. The colors still look very good, except that there’s a bit of yellowish tint to things. It’s particularly noticeable with an all-white background (e.g. when working in a word processor.)

I think this is from the old fluorescent tubes that it uses as backlights. Short of tearing the the thing apart and putting in brand new backlights (which may not even exist any more), is there any way to compensate with software and/or operating system settings?

Sure, go to the custom color temperature settings, for R G B values.

Equally, reduce both red and green, and kick up the blue a bit.

Alternatively, you could use the default color modes when the sun goes down and install f.lux for an extra yellow / candle light screen. i’d also recommend using minimum brightness setting at night, dark modes, and even reducing the contrast setting as well if it is still fairly bright.

Tried looking in Windows settings for something like this, but could only find “ICC Color profiles” which couldn’t seem to be manually edited.

I then remembered seeing some color settings in the Nvidia control panel, and sure enough I was able to tinker with the colors there. Set brightness/contrast down 5% for red and green, and up 5% for blue. Still not perfect, but much better. Thanks!

Hopefully there’s a similar panel in nvidia-settings in Fedora. 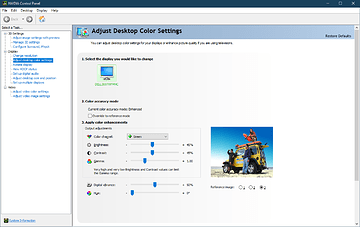 It may be more convenient to use software on the operating system but I’d recommend getting familiar with the monitor’s buttons and settings.

Regarding the still yellowish tint, I thought about it a bit more and have another suggestion. Try making the display more purple instead. Rather than equally reducing “yellow” via both R and G, try reducing more green than red.

Orr, try reducing more red, and reduce some green or actually even incrrase gren and blue together. The rationale here is that green and blue create aqua, which fluorescent lights usually do a decent job with, in stark contrast to LED where there is almost zero color between green and blue, due to the phosphor used.

Regarding Fedora, there is redshift, where you can try the -b (brightness) for r g b or the gamma -g switch for r g b values. This is why I repeatedly recommend using the hardware monitor controls instead.

This particular monitor has NO hardware controls, except for brightness and power. From what I understand, at one time there was a Windows application that could be used to control some monitor features, but it was Windows 2000 era software that is no longer supported.

I didn’t look up the model you provided, as you can tell. I’m proud of anyone who can hold on to such equipment, even with its color issues. I got rid of a very… not old monitor because it had yellow half orbs on the top and bottom in the corners of one side. All those bulbs, circuit boards, plastic, glass, inverter, gold, all in the ground now. Just because it was yellow on a small portion of the screen, and yellow isn’t too unpleasant of a color to me. If it had been purple of something really off, that would have really bothered me. Yeah, redshift on Linux will do what you want I believe, it’s like Intel’s iGPU color software, brightness, gamma adjustments. Nvidia has it too, as well as AMD. So there should be a way to get it just right, despite the lack of overall white output. In fact, it’s better for your sleep anyway, not being so bright.

Who said it’s in my bedroom LOL? But yes, I did find the appropriate controls in nvidia-settings. It uses a different numbering scheme so it’s hard to exactly match the corresponding Windows settings, but it still gets the job done.

It doesn’t matter where the monitor is located, light exposure of both green and blue will reduce your production of melatomin. Green and blue light have the same power to disrupt your sleeo cycle, up to an hour. After which, blue light becomes twice as powerful of a melatonin inhibitor.

Just because it’s in an area that isn’t where you also rest, has no bearing on this effect. All of this information goes for indoor and outdoor lighting as well.

The back light [cold cathode fluro tube] is getting old.