Ok... It happened again - SSD Disappeared from my system

Why did my SSD disappear randomly? HDD's & SSD's

I’m still just as confused as I initially was. No Sleep settings in BIOS for storage. I gave it a good once-over, nothing.

That was the last time it happened. Now it did it again. My PC has been on for a few hours now. I’ve been doing some work since this morning and I go to launch a game… AAAAND POOF. Missing. I don’t store any work there thankfully. But it’s a WD 3D NAND Blue 1TB SSD. And it’s just gone now.

In the previous thread, I was told to look at Event Viewer. Well i’m there. What am I looking for specifically?

EDIT: It is NOT listed in Disk Management. It just vanished like Jimmy Hoffa. Gone.

Power setting set to turn off after XX number of idle minutes?

As for the system event viewer look under windows logs → system and scroll down for the past xx minutes = to say your lunch break and see if there is any red critical events. repeat if necessary for the application section.

It happened around this time - May - 2 years ago. I’m seeing some Kernel-Power errors. Weird. Because I didn’t use my PC yesterday. Or at least don’t remember doing so. I didn’t the whole weekend as a matter of fact. Unexpected system shutdown was logged. I never turned my PC on that day. This is freaking me out.

Also, I have to point out that this hasn’t happened for 2 years and for a loose cable to become an issue like that seems very unlikely.

This is purely guesswork, but has it been abnormally warm or humid there? I only ask as you say it was around the same time of year, though with 2 years between that is very unikely, thats why i say unusually warm or humid.

Have you got a different PSU you could use? 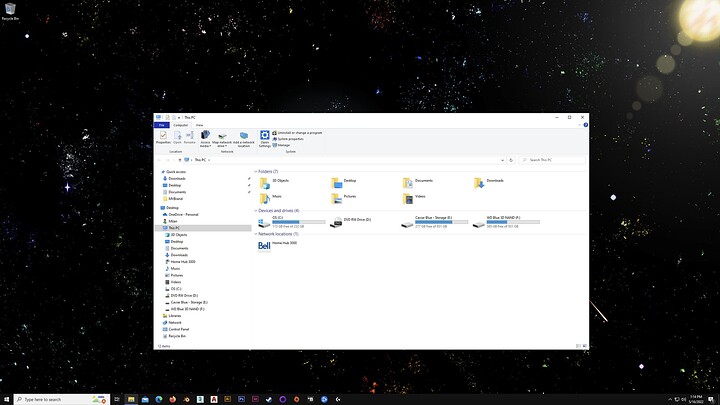 There she is. After a simple restart. F drive back.

And I find it interesting that you bring that up. I live in the Niagara region, in Ontario, Canada. To say it’s abnormally humid is an understatement. It’s like breathing through a straw in the summer. And last summer was brutal. This month has been unusual in that a front of humidity came in the last couple of days. As for another SSD. Naw. I DO use a good EVGA GQ series SSD. Gold+ certification. I mean. it’s no slouch. Very, very strange.

Unfortunately I can’t say if it is or is not, was just putting an idea forward in case all fall short.

I wonder though now, assuming it is humidity related, if it could also be the SSD getting just the right bit to bridge or something.

But all guesswork. Sorry.

All I could say to try is swap the PSU and wait, potentially years, or swap the SSD… Same idea.

The only thing I would be worried about otherwise is just loss of data. If it is just games, it sucks but I have lost game drives and its okay.

A device driver getting out of wack or a windows update?!

A device driver getting out of wack or a windows update?!

I DID do windows updates recently. thursday? Friday? Friday I think, yes.

I don’t know. TWO YEARS went by in between these events. Odd, to say the least.

My experience with drives disappearing and reappearing would be they are almost always a connection issue. For M.2 type drives make sure they are properly inserted and screwed down. For a regular SATA drive, check that everything is properly connected. If that isn’t it, then its time to troubleshoot the data and power cables. Swap out if you have spares or swap between drives if you don’t.

There is also the possibility of impending/intermittent failures.

But the funny thing is, how exactly can I troubleshoot because this isn’t something that continuously happens. It happened twice in a 2 year interval.

. Weird. But I can’t help but laugh at the same time.

My experience with drives disappearing and reappearing would be they are almost always a connection issue.

Aye and was one of my first suggestions!