After having this Agility 3 SSD, coming up on around 9 Months now, possibly longer. I thought I would share with you some benchmarks.

When I first installed the SSD to my i7 Laptop I was getting around 400MB/s read, and 350MB/s write, if i remember correctly. Now I am selling this and going to build a desktop, I thought I would retest my read and write speeds, as you can see... a lot has dropped off.

I guess this could be usefull when choosing an SSD and it will give you some benchmarks of what to expect in the future from the drive. 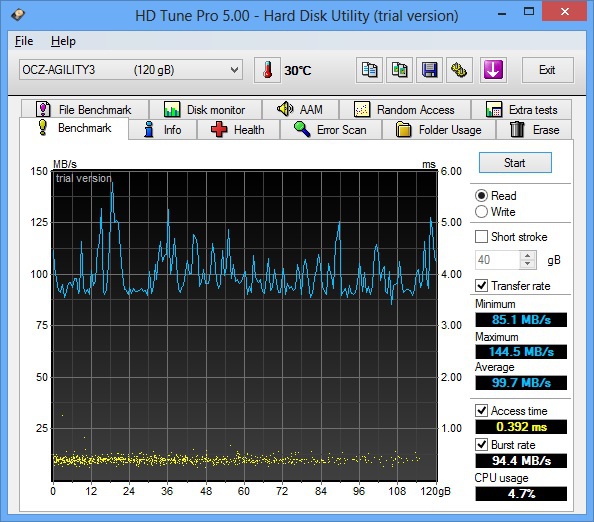 As you can see, a lot lower now - I'm not even going to bother running a write test...

On another note, I'm planning to get 2x 120GB SSD's and RAID0 them in the future in my new build. I'm wondering what SSD's do people reccomend for long term perfomance rather than out of the box massive read and write speeds?

Although they are quite expencive and they are by no stretch of the iagination the fastest drives out there, but theya re still quite fast, I would go for an Intel drive of some sort.

The 520 is very nice. The other plus to intel drives is that they are very good looking.

The kingston HyperX 3K drives I heard had really nice life. If you want the extra life and speed. Get a few WD Velociraptors and put them in raid 0. You'll also get more storage that way too. I would take storage and lifespan over speed

I know SSD's tend to slowdown as they fill up; I don't know if that's SandForce specific, or SSD's in general. Mine also lost a huge chunk of performance.

As for RAID, I'd go for either Samsung 830 or 840 pro, OCz Vertex 4, or Plextor's M5 Pro. SandForce controllers just rub me the wrong way for some reason.

had mine for a year now... it died
thought i'd warn you

had mine for a year now... it died
thought i'd warn you

Are you referring to the OCz Agility 3? Try a updating the firmware. Mine stopped showing in the BIOS after a few months and after a firmware update, it's still going. Had it for almost 2 years now.

updated the firmware on it all the time, didn't make a difference

I'd suggest the Kingston HyperX 3K if you want long life, and stupid fast read/write speeds. I have the 120gb flavour myself, and it works fantastic. With a near full drive, I still get 450mb/s read/write.