Just thought I’d report on this. @psycho_666 brought this to my attention some days ago in The Lounge but I hadn’t seen anyone else mention it on the forum and now that I have tested the solution I’d like to report my findings. A number of users of Nvidia's GeForce GTX 900 series and GeForce 10-series have experienced problems using newer monitors connected via DisplayPort 1.3 or 1.4. Problems have ranged from blank screens to the inability to properly boot up at all.

For those of you who don’t know, there apparently has been an issue with DisplayPort connections on some Paxwell GPUs when connecting to newer monitors and higher resolution monitors in particular (1440p+).

While not universal, when some displays are connected over DP you may see artifacts, odd flickering, grey lines, the monitor may need to be power cycled to be detected or your PC might even boot slowly or fail to post entirely.

Since I’ve upgraded to a 1080 Ti I have been noticing it on my one 1440p display. My 4K display seems to be unaffected. I have seen the grey flickering lines (often on this website and in some games), cursor corruption, my monitor was sometimes undetected and I have had my PC fail to POST. Other than the POSTing issue I had assumed that it was the monitor or a bad DP cable however switching cables had no affect but running over HDMI solved it.

This issue can not be fixed via driver update and needs a BIOS flash to fix. nVidia has released a tool to do it. It detects if your card needs updating then will update it if you so choose. It works on both reference and non reference GPUs. It is available here:

I have since updated and since I have I’ve experienced no problems with my display. No fails to POST (POST times in fact appear to have improved slightly), no grey lines either… Have had no issues relating to the update.

So for anyone having a similar issue to me maybe check it out. A bit troubling that apparently this has been an issue since the 900 series but no fix was available until now.

I did have one monitor that was picky on the DP input and did occasionally need a reboot to get the DP to recognise the PC but I’ve not got it now so can’t test this fix with it.

Thanks for the report. Had similar challenge with my 1070. Found a work around though. It’s all good now

Is there a linux version of the updater?

AFAIK there isn’t one.

However if you really wanted to run the update you could boot into Windows and then run it there as it works to flash the BIOS on the card and has nothing to do with drivers.

Little inconvenient but it should work

I don’t dual boot Windows anymore, and it won’t work through a virtual machine. But I don’t actually have any problem right now.

Since I flashed the BIOS on my motherboard I haven’t had this issue. I haven’t bothered with flashing the GPU though. Maybe it’s only an issue for those who run 4K?

It was occuring on my 1440p display. My 4K display was unaffected.

It depends on the monitor 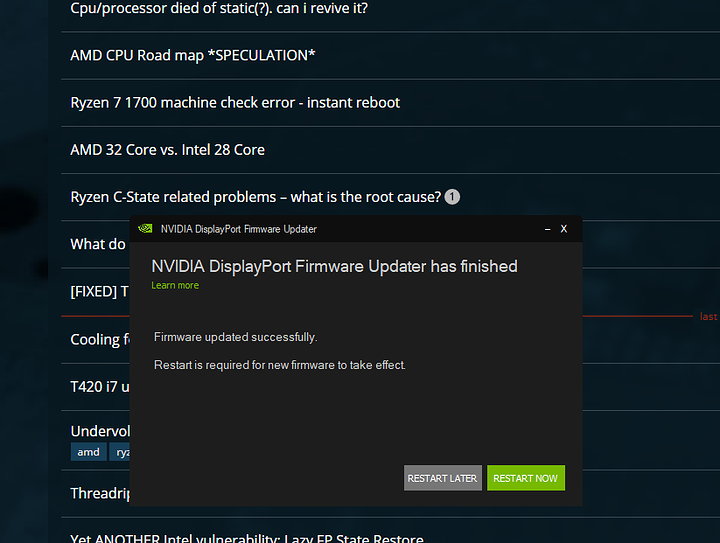 guess I had just bad luck. The ryzen and windows is making me scratch my had since I own it but when it’s working power house of a pc