Not sure what to ask for this. What is fair? 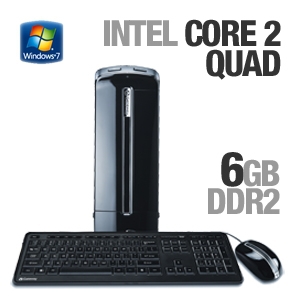 I'm hoping you guys can give me a fair asking price for this little computer I have that I want to sell (just tower, no keyboard/mouse). The computer is a Gateway SX2802-03 Slimline with an Intel core 2 quad 2.5ghz processor, 6gb ram, a brand new 1tb hdd and a new asus PCE-N15 wireless card that I put into it since it didnt originally have wireless. Im trying to figure out what would be a fair price to sell it for on craigslist. I've also made system image discs and recovery discs for the new install of windows I loaded onto it with its original OS key. The tower is In really good condition, the only flaw is with the little door in the front hiding the media ports which has a couple scratches on it, metal has no dents or scuffs. Thanks in advance!

i'd ask maybe $350, then probably drop 50 for negotiations

Thanks, Thats about what I was thinking myself... If anyone disagrees with that, post and let me know what you think its worth. I don't want to be one of those jerks on craigslist that has a windows XP laptop asking 150-200 bucks for their junk. Obviously this computer isn't junk but you get what I mean. People on craigslist think their old trash is worth a fortune.

Why can't you just do your own calculation? It's fairly easy; go and have a look at each similar component on an action or classifieds site and going by the age and condition come up with a fair price. I managed to sold my 20" Dell monitor for a fair price going by the usage, the condition and how it will be used more often. It's all about inspection + maths.

I've tracked a couple simmilar pc's down on ebay. going from 150-230 or so but they are all damaged in some way, have only 4gb ram and smaller Hard drives and no wireless. I guess asking 350 obo and hopefully getting 300 does sound about right then. Thanks.

It is craiglist. You'll be fine at 350, but don't be surprised by the lowball offers.