New X99 Motherboard or Upgrade to Skylake? Looking for Suggestions

Just a lurker who is looking for some input on some system maintenance.

So right now I'm running an i7-5820K on a MSI X99S Krait Edition motherboard. While the Krait has been running fine for a while, I'm starting to have USB ports go bad which causes post codes and I can't get the machine to start. I've worked around this by finding the ports that still work so it isn't a huge deal, but I wanted to look into a replacement before it gets worse which brings me to my problem.

There are almost no choices left for reliable X99 boards that I can find. Mind you I was using pcpartpicker as a springboard for my search. The EATX EVGA boards weren't coming up, and a lot of the Asus boards I was looking at are either out of stock or running a large amount of issues.

I was wondering if anyone here could give me an idea or point me in a better direction. Right now I'm debating between just upgrading to Skylake or to keep searching for a X99 board. My i7 has been running just fine and I don't see any reason to put it into retirement (could use it in a LAN set up with a micro ATX board).

Just some additional information in case it helps:
- This system is used for gaming, streaming, and editing
- Streaming wise, I'm using OBS. When streaming from console I'm planning on using an Elgato HD60 capture card to handle the encoding. I still have a few friends to try and convince to do more on PC.
- Editing wise, I use Adobe Creative Suite for videos and GIMP for graphical editing
- I'm not super worried about pricing, if I do go Skylake I'm getting a 6700K.

Sorry if my train of thought it sort of everywhere, just got back from work and sort of out of it.

Well there's a bunch here but why not just send in your motherboard to MSI for a replacement? Also make sure it's not your power supply going crazy slowly killing things. Really not going to be worth downgrading to skylake over just getting a new motherboard 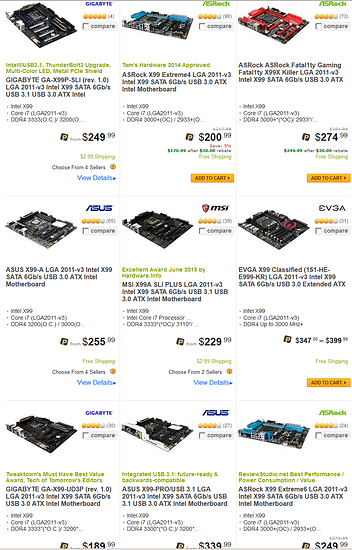 Looks like I have to look harder. A lot of the Asus / EVGA boards I saw were gone yet your results are showing otherwise.

As for the board - I've had an odd experience with MSI for a while now. They've been the only manufacturer I've gone with and this is the second board I've had that's started to have problems. It's not like they are system breaking problems either, just annoying ones. I just decided on looking for a replacement since I was planning on doing an upgrade regardless. I'll have to check the power supply as well, as I never considered it since it's only a couple months old.

What power supply is it?

Probably fine then, what have you been plugging into the USB port? if it were drawing a lot of power it may have damaged the ports.

Well, the last thing to get me stuck on a B4 code (USB hot plug) was my Mionix mouse. I've had to move it around to keep it stable. I use the front ports on my case for my external drive. Right now I just leave the bottom 6 of the 3.0 ports un-populated as this is the area of the ports getting the B4 code (in MSI's defense, it's most likely just the one or maybe two of them, but I don't recall which one it is exactly.) The only thing in a USB 3.0 port at this point is my Blu Snowball, but the B4 incidents never seemed to be caused by the mic.

You can try to bump up the vccio voltage to arround 1.2V.
That might solve your usb port problems.
If that fixes your issue, then you might try slightly lower it a bit.
Issues with usb ports is a common issue with allot of X99 boards exaly.
Sometimes just playing arround with vccio voltage fixes those issues.
Play arround with values somwhere inbetween 1.1V and 1.2V.

Issues with usb ports is a common issue with allot of X99 boards exaly.

I might give this a try on my ASUS X99-S motherboard,sometimes it doesn't play nice with USB on boot.

Super late reply to this - work has been hectic. I'll give this a shot. Might be worth it just to save time re-doing everything again. Thanks for the input.