Hello all I am new to Linux and I am running pop os. I purchased Cyber punk from GOG and want to know the best way to download and install. Thanks in advance and happy gaming!

Let me preface this by saying I dont have Cyberpunk 2077 and I do not actively use Lutris right now.

These days the goto solution is Lutris for, well, pretty much all games. The Lutris scripts will almost always install the most Linux compatible version of the game.

Only sad part about Lutris is that it does not really support abandonware / games so old, the only legal way to play is to install it from a CD-ROM. Naturally most such titles without a proper re-release have gotten inofficial QoL releases over the years, but since they are abandonware linking to these releases would have the same legal status as linking to ROMs. This is the only drawback with Lutris, and does not apply to your use case. So… TLDR; Use Lutris

Shouldn’t need to. The way Lutris integrates GOG is that you can login and then it will auto-download the files, or if you don’t want to log into GOG you can just download the files from the website manually and point Lutris to the installer file: 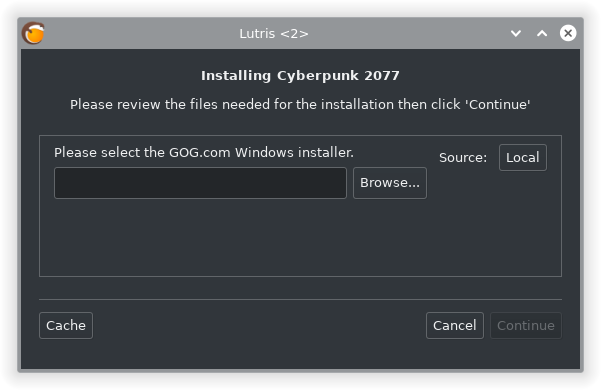 Only sad part about Lutris is that it does not really support abandonware / games so old, the only legal way to play is to install it from a CD-ROM.

It’s certainly possible to write installers that install the games from CD-ROM, that’s absolutely in the realm of possibility. The issue here is just that when barely anyone plays the games in the first place, the chance of a Lutris script already existing are pretty much non-existant. So you’d have to actively go out and write a script yourself, it’s a community effort after all.
On how to do this, see here:

So you’d have to actively go out and write a script yourself, it’s a community effort after all.

Yeah, I looked at it - unfortunately, like you say it requires the CD and any sane person these days just download an .iso from a shady website somewhere. CDs/DVDs are pretty much extinct these days - the last time I used one was when I installed the newly released StarCraft II - WoL on my PC, and that was only because I got it as a birthday gift. Only reason you’d want to use the old arcane discs are for old non-digitalized PC games, these days. Any other media should already be backed up to a harddrive somewhere.

The problem is that Lutris scripts cannot in any way allow you to point to a non-legal source, not even a local .iso. I understand why and I agree with the decision to not allow this (pretty much, piracy bad sez’ guys with power, so let’s not make the project get sued into oblivion on purpose). But it kinda sucks when you want to play some classic abandonware and need to jump through hoops for a game noone really cares about anymore. There are a lot of unpopular games that still hold some merit…

The problem is that Lutris scripts cannot in any way allow you to point to a non-legal source, not even a local .iso.

You don’t need to point to an .iso, you still just point to a “drive”, and since you can mount the iso as if it were a drive, it acts the same way. Also from what I know local .iso’s are fine, since they aren’t necessarily illegally obtained.
That said if you’re having questions regarding that I suggest you hop on the discord or IRC if you’re not already

Gold rated just means how much work it is to get running, i.e. if it needs any fixes, has crashes and whatnot. Doesn’t really tell you anything about performance.

That said, pretty much any game these days once you get it to run is near-ish baremetal windows performance because DXVK got incredibly efficient since its first release.