I have a new PC I’m building and I can’t figure out why it won’t POST. It powers on, GPU lights up, LEDs on the motherboard light up. I’ve used two separate sets of RAM (4 different sticks, in the proper slot), two different CPUs (A Ryzen 3900x and a 3600x), the GPU works on a different machine, tried both PCI-E slots, but it still won’t POST. It boots, fans go high and then settle after which it powers off with a single press of the power button as though it were on the BIOS screen. I have also checked the monitor so it’s on the right source and whatnot, it works with my old machine on the same port just fine.

Likely a bad board or memory issue.

Honnestly idk where you boaght the parts from.
But i would suggest to rma the board.
However the Msi x570 Gaming Edge will not be the greatest,
board to pair with a 3900x.
Because the vrm on that particular board is pretty weak.
So make sure you have a decent airflow around the vrm area.
Otherwise it´s likely that the vrm will overheat when pushing the cpu.

My recommendation since you have a 3600X as well.
Pair that with the Msi board.
And buy a better x570 board for the 3900x really.
I could recommend you a couple of decent x570 boards to pair with the 3900x.
But it kinda depends on what you eventually could spend on it.

The Msi x570 Gaming Edge + 3900x is just not a great combination unfortunately.
Because like i said the vrm on the board is pretty weak,
in terms of the used mosfets.
It will be totally fine for a 3600x or hence a 3700x doe.
But for a 3900x not so great.

Sounds like a RAM issue, but your platform is new. I built my niece an ITX system on an i5 3570 platform (Ivy Bridge) and the ITX motherboard did not recognize the RAM. It acted just like you describe yours… starts up, runs and shuts down.

I had to find some older RAM and update the bios before I could use the 16GB kit I wanted in the system.

You might need a bios update to accept that RAM set. Maybe try just one stick in various slots.

Yup memory issue could also be a possibility.
However he seems to have tested with different set of modules.

Another thing he could try is do a hard bios reset,
by unplugging it from wall power and then take out the bios battery,
for a few seconds.

However since the board shuts down out of itself,
after the fans spin up highly.
I kinda think that it doesn’t detect the cpu.
When memory isn’t detected the board won´t shut down in most cases.
This mostly occures when it cannot detect a cpu,
or if a cpu isn’t installed properly.

Thats why i personally suspect a bad board.
Because he also tested with two cpu´s.

Did you make sure you plugged in

It’s a common mistake everyone makes 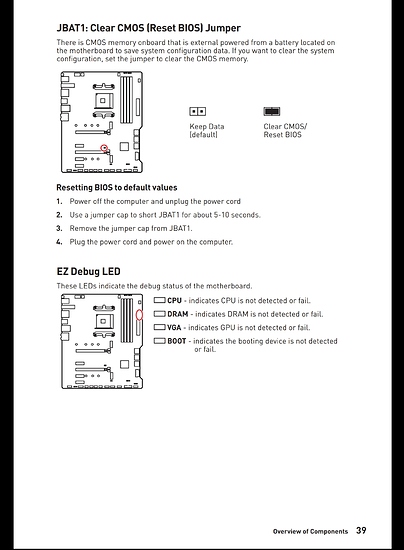 It was indeed the board! Apologies for the late reply. Due to all the craziness, it took a bit longer to get a replacement. I accidentally shipped it to my work which is shut down haha.

I’ll probably stick with the current board for now because I’m just relieved to have it up and running, but any suggestions are greatly appreciated .

Basically as long as you have some good airflow in the case and run it at stock.
Then it should be okay.
But like i said it’s not most ideal combo with a 3900x.

If you ever consider to upgrade the motherboard,
kinda depending on features that are important to you.
There are a couple of decent choices.

Unfortunately Msi does not really have many interesting x570 board choices.
Because the first really decent board they have is,
the Msi X570 MEG Unify, this board has a great vrm same as the MEG ACE.
But the Unify comes with an realtek lan instead of intel.
Which in my opinion at that particular price point is kinda well yeah…
The Msi X570 MEG ACE does come with both intel + realtek and a great vrm.
But at the price point of the MEG ACE there are simply better choices.

So yeah depending on said budget and features you would need,
i could recommend these boards at different price categories.
But i’m not going to recommend the extremely high priced x570 boards.
Because honestly on a main stream platform, spending more the $400,- / €400,-,
on a main stream board is a bit ridiculous if you ask me.
But i will add one to the recommendation list.

If you do like to spend a little bit more on a x570 board,
And you would fancy features like Thunderbolt and a 10G Nic.
Then the Asrock X570 Creator board is a really nice choice.
But it is also a $500,- ish board.
And only really worth if you trully could make use of TB3 and the 10G lan.

You can’t really go wrong with any of the boards above.
But given that you have a 3900X.

I would say the Gigabyte X570 Aorus Master if could afford.
This is just a great board.
Otherwise any of the other boards above would be fine as well.