TL;DR: The book with the most likes in this thread will be chosen for the month of November.

Seems that @gearheadgirl27 has gone AWOL so I think I’d like to take up the book club, or at least provide the effort it takes to coordinate such a thing.

I think to resume the club, I think we might go with something a little light, so feel free to suggest books down below.

At the end of November (the Sunday closest) we will all convene either in another thread or within the voice channel on Discord. If you’re more comfortable with text-only communication, choose the thread, if you’re down to voice, then go ahead on Discord. Try to keep from going both as that would be a little unfair to have insight into a book brought from one thread to the next.

Let the voting begin, one book per comment! I’ll refrain from suggesting one, for I could be bias after all

Edit: you can vote on more than one book, not a problem.

Note from OP: Goddamn these are fantastic suggestions!

I picked this book up at the library recently so I’d like to have it available as a choice.

You put it here, it’s an option to vote on!

“Free as in Freedom” by Sam Williams

Just finished it myself. Still don’t really like the guy, but I do have more respect for him now.
Oh, and it’s free, of course.

SOON TO BE A MAJOR MOTION PICTURE The Southern Reach Trilogy begins with this Nebula Award-winning novel that "reads as if Verne or Wellsian adventurers exploring a mysterious island had warped throug ...

Dude that directed Ex Machina is directing this movie. You can look up the trailer now. Would be a good time to get on board. This is also a good pick because it is a pretty short one. I haven’t read it yet, but it is sitting on my book mountain.

I listened to an interview with the author and he seems to have some really interesting ideas. Would love to read this and get other peoples thoughts.

Since there are already a few suggestions here, I think it would be safe to put my submission here now. 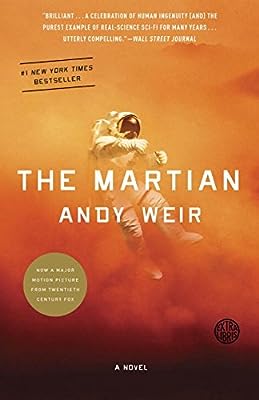 The Martian: A Novel

Six days ago, astronaut Mark Watney became one of the first people to walk on Mars. Now, he's sure he'll be the first person to die there. After a dust storm nearly kills him and forces his crew to ev ...

Hi, I’m new to the forum. I saw this thread and figured I’d sign up. I’m always looking for new things to read. Currently I’m reading The Iliad by Homer.

Death's Mistress: Sister of Darkness: The Nicci Chronicles, Volume I

A New York Times bestseller, Death's Mistress: Sister of Darkness begins The Nicci Chronicles, Terry Goodkind's series with a cast of characters centered on one of his best-loved characters in the now ...


So I can move onto reading.

Welcome to the forum Mr. ODR! Glad to have you on board! A classic you’re reading there

A little late on this but if you’ve been paying attention, we can see that Homo Deus has gotten the most likes of all the book suggestions!