Need HALP with Audio. Having Issues

anyways to be straight forward I uninstalled Nvidia Drivers, and Right Now I'm running off my iGPU of my 4670k now here is where my issues begin. After I uninstalled the Nvidia Drivers, My Audio just STOPPED working, i am getting no audio output from my monitor (which is how i have it anyways don't have a headset sadly maybe during black friday or christmas i'll get one) I've tried everything to fix it, i Checked Device Manager and My Audio Drivers are there. however i am getting no Audio what-so ever BUT, 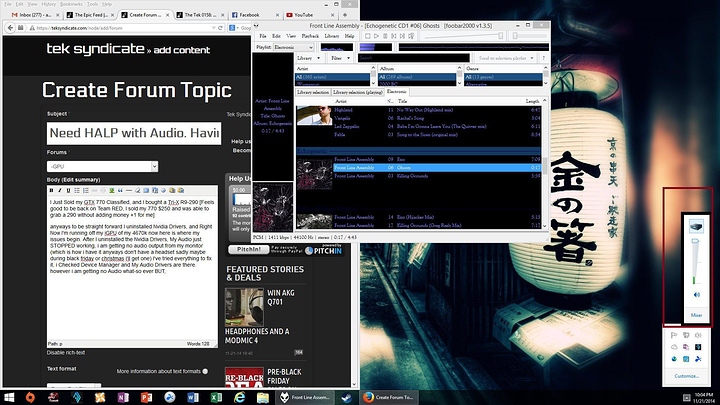 Here's what I see. to give you a general idea.

Anyway to fix this cause i feel like i've tried everything. reinstalling audio drivers but it still doesn't work.

The NVIDIA drivers include HDMI audio drivers bet when that left it messed up your registries.

so how do i fix this. i've tried reinstalling drivers and it didn't work.

Have you made sure the correct device is selected in your playback devices? It could have defaulted back to speakers instead of HDMI.

yeah. still nothing. i'm starting to consider never getting Nvidia if a Mess like this is going to occur every time i decide to jump ship.

I fixed it. I reinstalled the Intel Graphics Driver (which also has Audio Drivers in the package) it fixed everything the speakers on my monitor are now outputting sound. thanks for the help anyways.

But AMD has theire own HDMI audio drivers?

Oh I know, I just bought the R9-290 Today from Newegg. the R9-290 comes in the mail Monday. As of Now i'm just using the iGPU and i was having issues with audio but i managed to fix it by reinstalling the Intel iGPU Graphics Drivers.