Need Assistance With A Bios File

got my hands on this fake gpu, claims to have 4GB ram but only has 1, need to get a bios file to fix this, but the bios files i find use gddr3, this looks like i has hynix GDDR5 h5gq2h24mfr

The picture is too small to read anything from it. Either provide a larger photo or more info about the card.

What does GPU-Z say about it?
Can you go to it’s bios repository online and see if there is one that fits?

sorry about the small pic, here is a bigger pic

i tried looking for the bios file online, but all the versions i find are gddr3 as opposed to the gddr5 that is soldered to the board

Arcording to the wiki there is GT 430 with GDDR5 support but the nVidia site only states DDR3.

In the worst case the card will not function. You could just back up the BIOS with GPUz and flash of back later if any do not work
https://www.techpowerup.com/vgabios/86540/gigabyte-gt430-1024-101008-1

Here is the only bios for a GDDR5 1024MB variant.
Seems a rare card, can’t find any pics online that match your board.
Is there any Palit branding on the fan? Any stickers on the back to be sure?

thanks for the response guys, ArgGrr looks like you got the right one, the pcb in the link matches the one i have, will flash that bios and get back to you guys,

otherwise there is no form of branding on the gpu.

i keep getting this error:

Checking for matches between display adapter(s) and image(s)…

ok, i manages to flash it with a usb eeprom thingy, but i get verticle dots. it loads into windows fine and device manager detects it as a gt440 now, but the dots make it unusable for a daily driver. any suggestions?

@catsay any input? that youtube vid has brought me to this forums where i found you

That card is used for everything from the GT430 the low end desktop variant GT630, the GT630M and the utter trash GT730 variants.

This GPU die is as much a damn scam by Nvidia as it is by the assholes making these fake cards.

Honestly these cards are worthless.

I’ve now had countless many people contact me about these cards, all with rubbish near defective GF108-300-A1 cores sourced from reject bins/ recycling hardware.

If I can be frank, I’m pretty sick of dealing with these since they’re not worth the time spent fixing them.

i tried the ddr3 roms, no luck. but thanks anyway, ill just toss them in the bin.

And they’re doing the same thing with the cheap over produced Kepler cores (GK106-220-A1 / GK106 in general) that I know nvidia had an oversupply of. 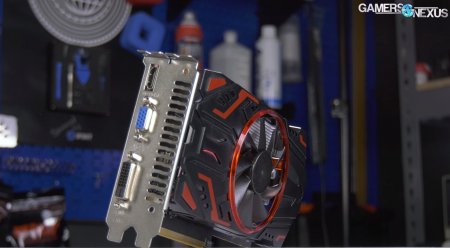 It’s hard to intentionally get scammed – to set out there and really try to get ripped-off, outside of maybe paying AT&T or Spectrum for internet. We still tried, though. We bought this GTX 1050 “1GB” card that was listed on eBay. -

The worst part about these GPU’s though is honestly the RAM chips. They have the BIOS’s modded to run them at high voltages, loose timings and low clock frequencies so they don’t crash.

If you’re bored and want to mess with it just for fun.

Flash one of these BIOS’s.

I saw that yesterday. Good video.

Interesting. I guess the initial warning came up because the bios that was currently in didn’t match what you were trying to flash.
I’ll assume it sort of worked initially without dots? Could be clocks rates.

Your results may vary, as they have done so far!
I have never tried to edit an nvidia bios, so not sure if this will work with yours.

thanks catsay, ill try those out

thanks arggrr, ill look into that as well and maybe mod the orignal bios

catsay - none of the gt630 roms were stable

arggrr - the editor does not allow me to reduce teh amount of vram. i believe thats all i need to modify to ensure the gpu does not crash (by having programmes allocate more mem than there is)