Need advice on airflow; I have a hotspot - Corsair Carbide Air 240

Right off the bat, I'm going to say this case really sucks for cooling. I opted to for a AIO Liquid Cooler for my CPU, hoping I could mount it up top, however, there is no clearance on top nor bottom - there is barely clearance for standard 25mm thick fans on the top, and not even that much on the bottom vents. The only place I mount the Rad was in the front, which gave me headache for airflow...

I opted to orient the case with the window side panel facing up and use the CPU cooler as an exhaust in pull configuration, and a good thing I did because the air gets ridiculously hot when the CPU is under stress. With an overnight Prime95 test, I could literally use the computer as a personal space heater if I pointed the front towards me.

The real problem here is there is little air circulation on the left side (what would be the bottom with normal orientation) where my GPU sits and it becomes a massive hot spot. The area is ventilated, but just lack of airflow. I've only noticed since I started playing GTA V. It doesn't put enough load on the CPU to ramp up the fans as exhaust (Core i5 2500k @ 4GHz), but has a near constant 100% GPU load (EVGA GTX 760 ACX SC). In my old case, which was a dusty PoS, the GPU never got much hotter than 76c as I had my temp target at 75c, and fan noise never got particularly loud with a custom fan profile. However, in the Air 240 case, with those same GPU settings, my GPU has gotten up past 80c with fans screaming. The issue is alleviated when I open the top/Window panel, or if I ramp the manually crank CPU fan speeds, though both have issues. If I remove the top panel, I'm concerned about dust as my room has a lot of dust since I have to keep the room's window open nearly 24/7 because it's always too hot, and if I crank the CPU fan speed, it also cranks the pump as well, and I'm concerned about excessive wear and tear. There is also the noise factor as the Seidon L240 gets excessively noisy at anything above 1200RPM. I usually crank them to 1800RPM to ensure it's pulling out enough exhaust, but then you can easily hear the computer across the room.

As I've mentioned before, there isn't clearance to mount a fan where the GPU sits. In addition, I'm using up all of my fan headers on the mobo. It comes with 4 headers total (CPU 1, CPU 2, Chasis, and Power). I have my two right-side mounted fans as intake using Chassis and Power (<- forces 100% all the time), the pump is on CPU 2, and fans are CPU 1 w/ the included PWM splitter.

Any advice on my hotspot/airflow/noise issue?

Not to sound disrespectful. but did you even bother to check out reviews before purchasing it? alot of reviewers have stated that its an excellent case if you go ALL OUT with Air. with water-cooling not so much. because you have to sacrifice waay too much to get watercooling in there and for the most part nothing really fits.

My advice to you is to get rid of the Water-cooler and go all-out with fans in the case. put a fan on all places you can. even on the 80mm mounts. I have two 80mmm Noctua fans in my Silverstone FT03 that are just fine as intakes. and i believe they will be fine as exhaust fans

Not thoroughly, no. I had assumed Corsair, being the reputable company that they are, wouldn't allow for such gross oversights. I also instantly fell in love with the dual-chamber design and large window. A lot of the issues they have would have been fixed if they made the case 30mm taller. Maybe I should have gone ITX. The raving reviews on store websites led me to believe I couldn't go wrong. Live and learn.

I wanted to go air cooling, but I also wanted to overclock. The height restriction left to me limited to 80mm tower heatsinks, or a large down firing heatinks, which are neither cheap nor plentiful. I wanted to go NH-C12P SE14, but with a notoriously ugly aesthetic, I would have to pay an additional $20 or so for better looking fan, which would have put me nearly $100 - it just made more sense to go AIO at that point.

My advice. Forget having it sit on it's side. Have it stand up properly. The heat will naturally rise, and get pushed out by the fans. Otherwise, the hot air will just sit there with nowhere to go.

Back when my GPU was air-cooled, It never got past 65c at load.

Honestly, the reviewers didn't even try...

there are a few viewers who took the time to talk about it. TastyPC and OC3D did almost 20 minute reviews on the case. the general consensus is the same. if you go all airflow. it's amazing. if you go water-cooling, you only have one place to mount it. there are some CPU coolers that perform just about the same as a few water coolers. i have a Noctua NH-U12P S.E in my current case is around $60 bucks and it keeps my 4.5Ghz 4670k pretty cool. 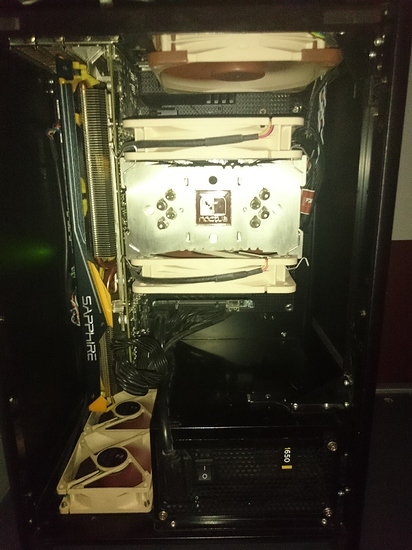 Jelly. I try to get value in perspective - I'm a gamer on a budget. I was looking into LCing my GPU, and your set up is genius! That would solve my problem. I love the creativity you had. I was also thinking about re-using my fan controller, but it's a 5.25" mount. I was thinking maybe I could stuff it in the HDD bay since I only have 1 drive there and pull it out whenever I need adjusting. But the top of the PSU could work.

Anyway, I thought I would share my set up so far. Sorry if the picture kinda sucks, I took it tethered to a USB cable since my phone is charging. 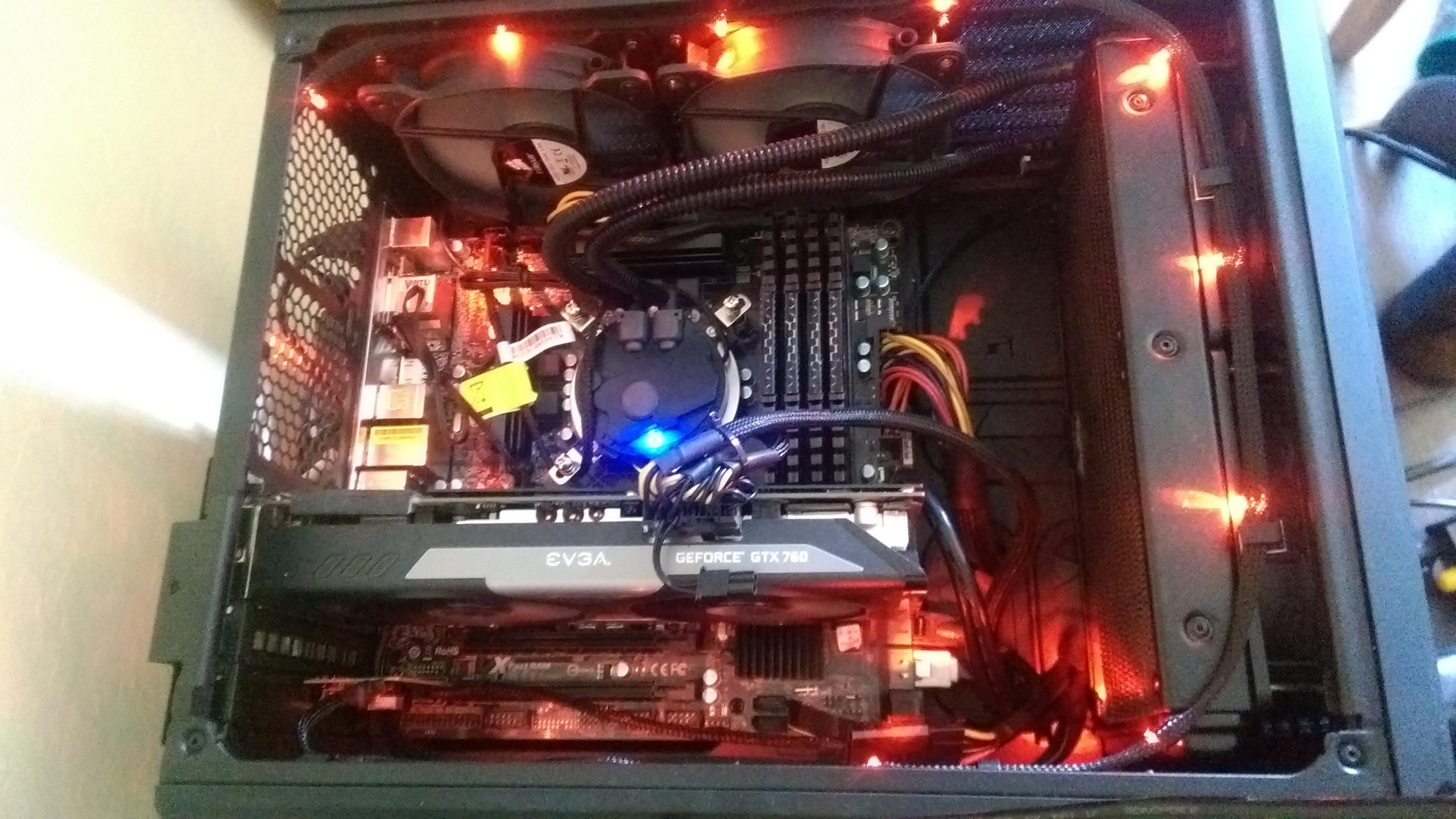 I clearly mounted two AIO liquid coolers in my build, and a bunch of fans... Hell I'm very confident that I can go with a custom loop with two rads if I wanted to sink more money into my build. (1x 240mm and 1x 120mm)

Yeah that's a nice set up you've got there. Definitely get a NZXT Kraken G10 with a Asetec based AIO liquid cooler to cool that GPU.

And that's perfectly fine.. till you try fitting two graphics cards in your loop.. the point i was trying to make is that even though you can go water-cooling in the case. it's not a water-cool friendly case. you have to do some finicking to mount things properly. and for the most part it's really not worth the head-ache. that's why i recommended he just go all out with fans. and get a fan CPU cooler. it performs just as good as a few water-coolers. and airflow will be amazing.

I did run crossfire Tahiti chips in this case when both cards were stock air cooled.

If I went with a full custom loop with the two rads, I definitely have enough room to run Crossfire again, with the CPU and both GPUs under liquid cooling. The reservoir, pump, and 120mm rad would be in the back chamber. (The NZXT Kraken G10, and it's fans, and those AIO tubes are a bit on the bunky side.)

Isn't that what being a PC enthusiast is all about? Making things work as much as possible?

I respect your opinion, but I -and probably other people- don't like the look of big bunky Air coolers.