Continuing the discussion from Need advice on airflow; I have a hotspot - Corsair Carbide Air 240:

Need advice on airflow; I have a hotspot - Corsair Carbide Air 240

Right off the bat, I'm going to say this case really sucks for cooling. I opted to for a AIO Liquid Cooler for my CPU, hoping I could mount it up top, however, there is no clearance on top nor bottom - there is barely clearance for standard 25mm thick fans on the top, and not even that much on the bottom vents. The only place I mount the Rad was in the front, which gave me headache for airflow...

I opted to orient the case with the window side panel facing up and use the CPU cooler as an exhaust in pull configuration, and a good thing I did because the air gets ridiculously hot when the CPU is under stress. With an overnight Prime95 test, I could literally use the computer as a personal space heater if I pointed the front towards me.

The real problem here is there is little air circulation on the left side (what would be the bottom with normal orientation) where my GPU sits and it becomes a massive hot spot. The area is ventilated, but just lack of airflow. I've only noticed since I started playing GTA V. It doesn't put enough load on the CPU to ramp up the fans as exhaust (Core i5 2500k @ 4GHz), but has a near constant 100% GPU load (EVGA GTX 760 ACX SC). In my old case, which was a dusty PoS, the GPU never got much hotter than 76c as I had my temp target at 75c, and fan noise never got particularly loud with a custom fan profile. However, in the Air 240 case, with those same GPU settings, my GPU has gotten up past 80c with fans screaming. The issue is alleviated when I open the top/Window panel, or if I ramp the manually crank CPU fan speeds, though both have issues. If I remove the top panel, I'm concerned about dust as my room has a lot of dust since I have to keep the room's window open nearly 24/7 because it's always too hot, and if I crank the CPU fan speed, it also cranks the pump as well, and I'm concerned about excessive wear and tear. There is also the noise factor as the Seidon L240 gets excessively noisy at anything above 1200RPM. I usually crank them to 1800RPM to ensure it's pulling out enough exhaust, but then you can easily hear the computer across the room.

As I've mentioned before, there isn't clearance to mount a fan where the GPU sits. In addition, I'm using up all of my fan headers on the mobo. It comes with 4 headers total (CPU 1, CPU 2, Chasis, and Power). I have my two right-side mounted fans as intake using Chassis and Power (<- forces 100% all the time), the pump is on CPU 2, and fans are CPU 1 w/ the included PWM splitter.

Any advice on my hotspot/airflow/noise issue?

Originally, I had discovered a hotspot, and I don't really have any good ideas on how to fix it. I recently purchased a 21:9 Freesync monitor, and will be upgrading to an AMD card because the 2GB vRAM on my 760 isn't cutting it anymore 1080p, and I need variable refresh rate. G-Sync Monitors are gimped (proprietary module has only DisplayPort; need multiple inputs), expensive, and I'm just fed up with Nvidia. Because of this hotspot, I would be restricted to blower-style coolers, but if memory serves, the R9 290 reference cooler was extremely loud and inadequate cooler to cool the Hawaii core. I was hoping HIS would slap their Black Hole Impeller cooler on a 290, but no such luck.

So, I was thinking, instead of running a single CM Seidon 240, why don't I run two smaller AIO Liquid Coolers? I was thinking of running two Corsair H55 Quiet Editions mounting them both to the front, in pull, as exhaust. One for the GPU, the other for my CPU.

Why do you guys think? Good idea? Would it actually work? Advice? Tips?
@Jason_Thongphetmanic - wondering if you specifically had any insights on using two 120mm coolers and the H55s.

Yeah. That would definitely work. I actually was planning on selling off my H100i in order to run two 120mm AIOs in my set up at first.

GPUs don't need robust cooling solutions like CPUs, so a 120mm radiator actually keeps them very cool. Your GPU will be 20~30c cooler in any situation you throw at it.

I would suggest that you have both Rads exhaust that hot air. You will find that the GPU's rad kicks off butt loads of heat.

And are you planning on getting a NZXT Kraken G10 or Corsair HG10?

And are you planning on getting a NZXT Kraken G10 or Corsair HG10?

One of the reasons I was planning on the Corsair H55 was because it appeared to have an asetek pump, thus compatible with the G10. The other reason was because it was cheap :P I was unaware Corsair had a mounting solution for GPUs. I'll look into Corsair's solution and see if it's any cheaper, or better aesthetics.

Side note - If I manage to sell my Seidon 240m for anything near what I paid for it (still have original packaging), This whole transition will cost me about $50, which isn't bad. I just need to save up a bit for a new GPU.

for an R9 290, i'd go with the Corsair HG10, because it has a full card cooling design. The kraken G10 lacks cooling for some of them memory chips and/or VRM.

Just make sure you buy a reference R9 290 to go with the Corsair HG10.

I think such a bracket with the Hawaii GPU core specifically in mind is well worth a $6 premium over the NZXT Kraken G10 (Found the Corsair one for $36 on the Egg.)

Thanks for the help. I'm just hoping I don't run into clearance issues with the tubes with two 120mm rads up front.

When getting a reference card, would manufacturer matter? I've been eye-balling a Sapphire reference card here:
http://www.newegg.com/Product/Product.aspx?Item=N82E16814202043

But, Amazon is my preferred retailer (Prime Member = 2 day free shipping), and found from Diamond, but historically based on customer reviews, their products have been shoddy. I'm just wondering if that would matter when purchasing a reference design. $20 is $20, y'know? 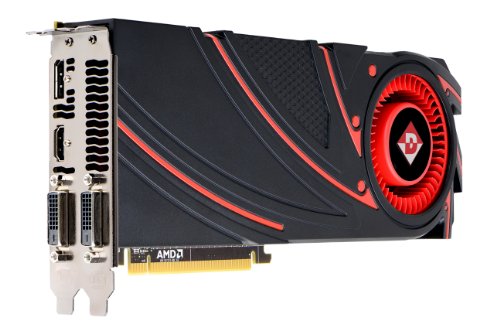 As far as i know, it should not matter which brand when it comes to reference cards. They will all be the same. But of course warranty should be considered.

Hopefully someone more with more knowledge could chime in on the subject.

I don't mean to Necro my own thread, but given it's the same topic, I figured it might be ok. Anywho:

I finally took some measurements and ultimately I don't have clearance to mount 2x 120mm AIO coolers upfront. However, I just came up with a ridiculous idea:
Switch my CPU to aircooling (looking at a Zalman CNPS8500AT, or Noctua NH-D9L) and hope my Seidon 240 cooler fits the Corsair G10 A1 adapter and have a R9 290/290X/390/390X cooled by a 240mm AIO!

Thoughts? Think my Seidon 240M will fit the adapter? And given that the CNPS 9500 stands at exactly 120mm, which is the maximum supported CPU cooler height, should I be worried? Just kinda spitballing here...

I'm not sure what kind of cooler the Corsair adapter takes. Though. I'm sure you can ghetto rig it to fit. And if you're handy, it wont even look ghetto. lol.

I'd be more worried about the clearance of the graphics card, with the radiator being in the front. My GPU is 11.5 inches and it is very snug. Just don't get anything longer than 12 inches. *But then that is also because i am in push/pull on my 240mm rad.