Need a New Sandy Bridge Board

Heya, Tek Syndicate! I'm new here, and I figured you guys might be just the group of people to help me out.
See, I bought a PC a few years ago. Inspiron 620. This will be my downfall.

It was never a bad machine, but I've been constantly improving it since I got it - first with network-attached storage and then a full-on rebuild. The only original parts in this machine, by this point, are the heatsinks and the mainboard. It's time for those to go. BUT I haven't been able to find a board that exceeds my current specs by any meaningful amount.

So, basically, I need an ATX/Micro-ATX board that:
Supports Sandy Bridge processors
Has more than 4 SATA ports (preferably, faster ones as I think mine only runs at 3Gbps)
More than 2 DIMM slots
Better PCIe connectivity (maybe for SLI?) Currently I only have 1 PCIex16 slot and a bunch of x1s.
And supports 95W TDP (THIS is why I'm running the S instead of the K.)

And HERE is the case this system will reside in: http://www.amazon.com/Rosewill-Black-Gaming-Computer-CHALLENGER/dp/B003YVJJ5Y/ref=sr_1_2?ie=UTF8&qid=1455756886&sr=8-2&keywords=rosewill+challenger

Now that the important part of this post is over, I figured I'd share some before-and-afters with you guys. 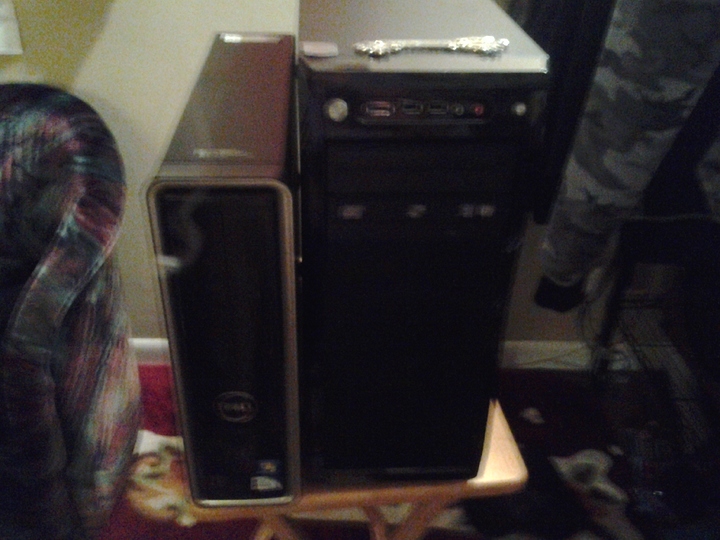 On the left is the old case. The right is the new one. The keyblade is an Oathkeeper and you'd better believe I superglued that thing onto my case.
Can't even tell.

Thanks, Tek Syndicate! I appreciate all the help you guys can provide.

Will probably be hard to still find a socket 1155 motherboard new.
But Z68 or Z77 boards will be your best bet to look at.

Hm, that's not a bad idea. Kind of surprised I didn't think to look at boards with different chipsets. Derrrrpppppppp.

Do you have any particular suggestions?

Should just save up for zen/kaby lake at the end of this year, it would be pointless to go dual GPUs on a 750ti, and you can buy 6gbps Sata pci-e adapters for your current board

and do you really need more than 16gbs of RAM?

Saving for new hardware's certainly an option I've considered, but if I'm at the point that I'm buying new CPUs/GPUs, then I'm just gonna be done with this build and give it to someone I love because it runs excellently. You might say I'm trying to hit a performance ceiling on this board before I move on as a more experienced and well-financed builder.
Plus, I couldn't actually use a PCIe slot for SATAIII functionality since I'd either get bottlenecked by the speed limit of x1 slots or not even be able to use one at all without altering my existing slots to accomodate larger cards. I mean, I guess I could take out my 750 but that kinda defeats the point of a gaming rig.

And no, I don't need more than 16GBs of ram. But, I'd like to go up to 12 since I still have my original sticks laying around and nobody's buying them.

A list of decent Z77 boards.
Not sure if you can find one of those for cheap somewhere.

You could just get 8gbs sticks of DRR3, but is just a side rig or something then? if it's your main rig you should probably just abandon it unless you find used hardware that you're looking for on the super cheap, and then just save up for all the shiny new stuff

Awesome, thank you. I'll see what I can do.

This is my main rig, although I'm a bit of a predicament financially right now. I actually only got up to 8GB RAM thanks to the kindness of a friend; otherwise I'd be running 6.
But, I appreciate your advice. I'm gonna run this thing into the ground, and then when I get back on my feet I'm gonna give it to someone else who'll do it all over again.

If you live in Europe, I have a barely used Gigabyte P67A-UD3P-B3 laying around.