I made this for gaming and wanted it about as small as possible. The first was hand wired. I designed a PCB and should have it made soon enough. I wired it up the same as the OLKB Preonic so it can be flashed using easy AVR as if it were a Preonic. Mine will have back lit font; I’m not messing with blank key caps.
The cardboard shows how the key matrix is wired to the Teensy. 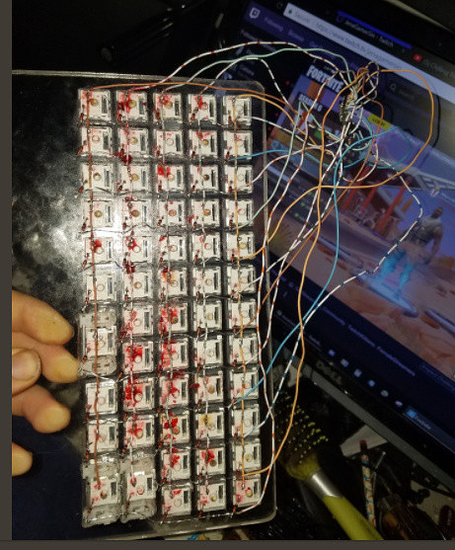 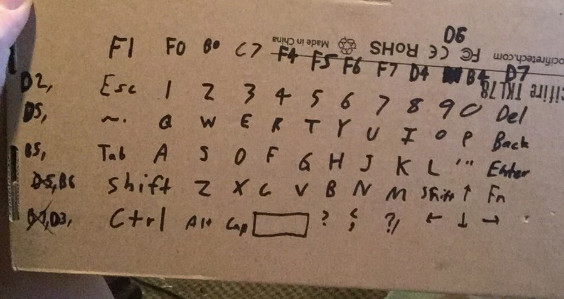 image.png1789x812 46.3 KB
vvv Original proof of concept. I modded this board to work with same teensy running same software. 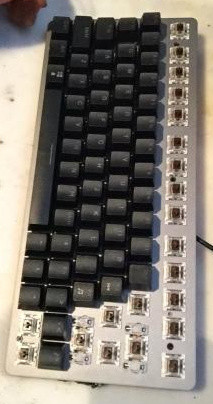 Did you 3d print the keys or repurpose them from other keyboards?

Wow nice project, what did you use for switches? Can consumers even get cherries?

I repurposed key caps from a Velocifire TKL 78. Plus an extra backspace key. Evgentually I’ll have to get some sort of custom keys (I plan to make and sell many).

Thanks. Cherries aren’t cheap. Sometimes you can find them on massdrop. I pulled some Outemu browns from a Velocifire TKL 78; it cost $25.

Nice, keep us posted on progress.

Oh yeah easy enough, but there are cheaper and arguably better switches out there now.

@MarcWWolfe I have many questions, I will get back to you for sure. Right now I need to eat and leave for work.

What are your questions?

cool stuff, did you design your own electrical designs or how was that process?

How did you make it interface with a computer?

I used a Teensy 2.0. I just flashed it with Easy AVR. Easy AVR has a Preonic customization setting/profile, and this is same size as a Preonic. I acually settled on a 5x12 size before I even realized that. I basically copy pasted shit that was already done.

Wow! Creative for sure OP. Best of luck with the project and whether it works or not uh A for effort.

Where did you get the PCB made?
Was it expensive?
Minimum order?
Have you designed PCBs before?
How long do it take to create?
How did you integrate the LEDs?
Did you make the plates yourself or had them made?

I have access to a lazer cutter to cut plates; it can’t do metal, hence the plexi plate. I have designed but not made the PCB. Took 4 hours to CAD the PCB. The one I Have now is hand wired; I added a picture of it from the back side.
The LEDs will just be on a toggle switch; on any keyboard I’ve had, I only fucked with the dimmest settinng… I’ll just use dimm LEDs, all I need. Some keyboards look like they have a 30fps strobe to them on their dimmest setting; I won’t have to worry about that.
I’m going to try etching one myself.

Super nice, I’ve been wanting to do this stuff for a while. How much time/money have you invested in this so far?

About $35. I lost track of the time. The laser cutting was cheaper for me.