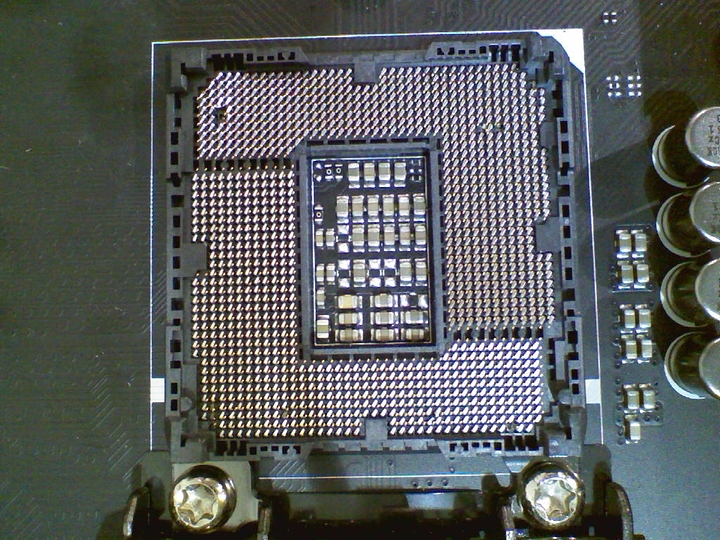 USPCJ12326.jpg1024x768 315 KB
Here is my quandary. Late 2016 my 75 y/o dad decided he was going to build himself a computer. An admirable feat I know. Without consulting me (the son who actually builds computers) with his part list prior to purchase, he bought a nice Corsair case, Asus Maximus XIII, mediocre SSD, 16g of DDR4 (4x4) … and a Socket 2011-v3 processor!! He then tried in vain to force it into the socket!

Long story short, it didnt work and after much diagnosis he decided to return that proc and get a i7 6700 non k. He then went about for almost 7 months using the onboard graphics… I told him that he had a frame of a nice race car with a lawnmower engine. He then decided to get a 1060 3g card and at least get away from on-board graphics. Good. When he went to install it, the top pci-e slot was dead. He brought it to me and yep, dead.

Now fast forward to today. He decided to RMA the board and sent it to ASUS. They sent this pic back… Looks like he damaged the pin array when he tried jamming the wrong chip in there. USPCJ12326|720x540

Should he just buy a new one since they can be had for around $100 after rebate or should I push him to get a board that is better suited for his non overclocked chip?

His board may be able to be fixed if one can bend the pins back. Also Asus wants 120 to send him another board.

Facepalm aside, my grandfather (and father for that matter) have about the technical understanding in regards to computers of a brick wall. Building a machine from scratch is quite the achievement.

I would go with the $120 RMA.
Most boards in the $100 range on newegg are either openbox or refurbished, not too great in my opinion.

I would not subject any human being to “mail in rebate” torture.
Especially at 75

First. I applaud your dad for making it this far when i comes to building a PC, screwing up the pins on the mobo really badly and somehow still managing to make it work. Knowing me one damaged pin would prevent my entire pc from working XD

Second. RMA the board. Mail-in rebates are a joke and you wont save any money in the long term

I’m gonna be that guy that repeats the same answer. RMA it. Rebate is almost never worth screwing with, just for 1 part.

Pretty cool that your dad had the gumption to do it himself, but it’s unfortunate he screwed up the pins in the process.

Thank you to all who replied. I spoke with him this morning and he will pay the RMA. He will chalk it up to an expensive mistake.

He will chalk it up to a relatively cheap lesson.

FTFY
Kudoos to your dad. Mine tries really hard too, and about the same age.

Not really sure why he wants this, but now he is asking me if I would like to trade mobo’s once his comes back. I have an Asus Z170-AR that I am running a stable 4.6g OC on my 6700k. He also would like me to get him a new HD for his laptop as part of the deal… Not really sure this is worth it despite the Hero board having an RGB header and better audio.

I am sure it is a better board overall and could potentally oc more than my AR but I think its mostly a lateral move if I take him up on it. My guess is he is kinda sick about what happened and it cost him more money than he thought possible and he just wants something that works well for him.

Let me know what you think…

Just the extra work of having to strip your system down and put it all back together with the new board would make me shy away from that deal.

Onboard audio quality, in my opinion, should not be a decision making factor. On board sound is trash, at least in my experience. It does not justify any added cost or value to me.

Kudos to your father for diving into the world of PC building. Sorry it worked out the way it did.

Making Dad happy vs yanking out a MB and messing with tiny screws. That’s a tough one

Since your Dad is 75 that puts you close to my age, and I can’t tell TrueAudio from an AM radio.

Epilogue:
Dad finally got his board back and reinstalled it. Naturally it would not work right so he brought it over and I went through everything. Turns out he hdd was all messed up and needed to be formatted from the bios. Once that was done I tried to run his Acronis backup/recover and found out he had cloned his hard drive instead of backing it up to a portable usb drive, Lemme tell you that is NOT a good plan for speed when trying to reclone it to his sdd… Oh well after a few hours, it was all up and running good now. WHEW! I think he will not be messing with it again for a while… until he learns about “custom loop”

Haha, tell him well done from us. While my dad in fact was the pioneer in our family to use a PC that was in the 90’s. His investment dialed down after 2000 and I ended up being tech-savvy one. Wonder if he could still pull it off today… he’s certainly not as patient as your dad.

A full disk clone is perfect for the worst case, actually a good move of him. Just convince him to settle with AIO-cooling when he finds out… xD