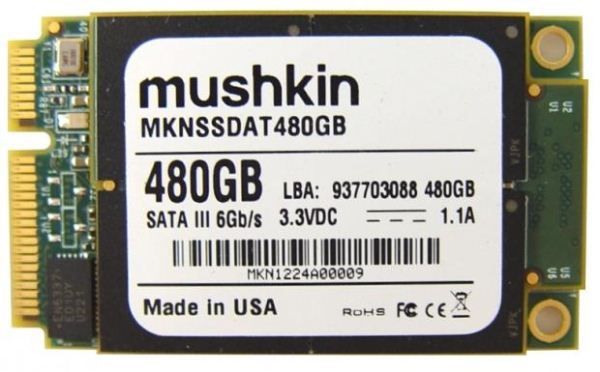 We're seeing a true shift in the mobile market to including SSDs in more of the market spectrum. What was once the domain of $1500+ laptops is now being pushed well into sub-$1000 territory, and good 128GB SSDs are generally available for under $100 now. If you need capacity, it's still hard to beat hard drives, but for fast storage SSDs are the way to go and have been for a few years. Along with the transition to faster and better SSDs, we're also seeing smaller mSATA SSDs. Up until now, the largest mSATA SSDs have topped out at 240GB/256GB, but Mushkin is now announcing their 480GB SF-2281 based Atlas mSATA drive.

mother of god, shut up and take my money

Mushkin makes great SSDs.  Too bad they don't get much brand awareness.  Not sure if due to lack of advertising or promotion.  Most people have never heard of Mushkin but they assemble their drives in Colorado and have been making top of the line RAM for years.  I have two Mushkin Chronos Deluxe 480GB drives and they have great performance and reliability.  Never had an issue with them.  Not quite as fast as the OCZ Vertex 4 drives but reliability matter more to me.

I bet you could fit alot of these in a 3.5' bay. Could make super sized SSD's.

I'd make a figure out a way to raid contol it, and stack them in an old HDD. Have one sata out, powering could be weird though. Make a 2TB SSD... da best.

um, there have bee 480GB mSATA drives on sale for awhile now, I put one on my Dream SNES build list several months back