On (RedGamingTech) he has a conversation with some internal testers at MSI and they talk about X570, PCI-e 4.0 and 16core CPU’s along with memory layouts and how they bin the boards.
Also they talk about some VRM implementations and other new information.
I found this interesting and just thought I’d share some new news with the community.

I can´t wait to take a look at their new X570 board’s vrm implementations,
to see if they would care to use some decent powerstages for their higerend lineup of boards this time around.

I mean the Msi X370 Xpower gaming Titanium was a complete joke.
And honnestly allthough their X470 Gaming pro carbon AC,
does use some better mosfets with lower rds on.
It´s still a bit cheapy.

I have the X399 Pro Carbon AC and I have to say I wish they forwent all the RGB and other cheap swag, and spent the money on decent LLC levels or even some pre configured OC settings that actually worked. Over all I am happy with my mobo, but I do think they went for “if you can make it right, make it bright!” Old machine shop saying.

I really like the MSI Z390 ACE but the one thing i dont like is for some unknown reason they removed IGPU support. If you pay $300 for board you would think there would at least be HDMI. I guess they figure if someone’s going to buy this board, they would be pairing it with a Dedicated GPU

Yeah their bios still needs allot of work basically on such kind of things.
But you particular board is pretty decent in terms of vrm implementation.
But yeah their bios needs some work still.

Well removing igpu support is a trend we see with more mobo’s in the Z390 series.

Last I heard HDMI needs a licensing fee so that could be a factor, though as far as I know DisplayPort does not have one so why not do that and help spread the connector, kill off HDMI.

You know what the problem is with MSI… a whole lot of talk and not so much action. Analyzing their boards year after year they never seem to upgrade their powerstages. they think they can continue to get away with the same stages or same tier stages. They need to really put more effort into actually designing and considering power delivery as its not just RAW amps that you are concerned with. Here is my VRM post to understand a bit about what is going on

VRMs - The what, why and how they operate! Wikis & How-to Guides

Hey all, @PhaseLockedLoop here due to popular demand. We throw around many acronyms every day on tech forums without actually having basic knowledge of what these things do. One such acronym you’ll hear amongst us hardware geeks like @MisteryAngel and I are VRMs. It stands for Voltage Regulator Module (VRM) and it is an electronic circuit that regulates and down-converts the voltage from its input from the power supply to the integrated circuits on the motherboard including the CPU etc. Thats a simple task but very essential as the VRM converts the various 12/5/3.3 V DC Power Rail voltages that come from a power supply unit into the lower operating voltages of the integrated circuit (i.e. 0.7 V, 1 V, 1.25 V and sometimes even lower or higher). Now us engineers we like efficiency so these devices are typically implemented with a switching style buck converter which is very efficient compared to other regulation systems. Let’s get into a largely oversimplified but detailed explanation of the basics. Through this post you will have many terms defined for you that are common use when discussing power delivery on most PC systems. Enjoy! So let us analyze the simple single phase VRM (not commonplace on today’s PCs for good reason). Here is a super oversimplified and generalized circuit diagram drawn up in Spice [Signle%20Phase%20VRM] Now as you should know from reading above this is essentially a buck converter though there’s never just one strict way to design such a converter. On the left side we have a 12 Volt Power supply unit. There are two MOSFETs before Node A. These FETs are distinguished by being on a high side and a low side which serves are actual switches (similar to your light switch through the rate it can switch at is vastly higher). Now, node B is the choke. It’s an inductor that serves as a filter for the ripple of this switching supply. Inductors attempt to maintain constant current by manipulating the voltage and thus the reason for the flyback diode th…

it is important that the power delivery is clean and ripple free. Overdriving and underpowered circuit always leads to issues. MSI has had these like when their boards lit on fire.

I hope to see a big change with X570 though…! maybe there is some hope when their contract for ANALOG Power Control is up!

“Yeah, but why up the number of stages when you can throw doublers at it?” - MSI, probably.

“Yeah, but why up the number of stages when you can throw doublers at it?” - MSI, probably.

When using smart PWM’s and doublers that have current and temp monitoring with current balancing. I would consider those just as good as true phases. Especially when all the other components are considered smart. I’ve always liked intersil’s high-end smart powerstages and doublers like the ones used in the Z390 and X299 EVGA DARK boards. The only other boards I’ve seen use these are the Z370 Aorus Gaming 7 and Asrocks Z370 and Z390 mini-itx Fatality boards. Gigabytes Z390 Aorus line uses some of the same components.
Intersil’s ISL69138 is part of Intersil’s fully digital PWM controller line and offers up to 7 phases in a mixed rail operation. 4 doubled to 8 using Intersil’s proprietary Phase Doubler the (ISL6617). ISL99227BFRZ-T 60A Smart Power Stages with 76A inductors is what the older Z370 Aorus Gaming 7 uses. and for an 8phase it’s rated at 480A. That’s the same Rating as the 12phases they use on the Z390 Aorus Ultra board.
I’ve always liked how the phases looked like they have little ones (1) writtin on them. I read that the exposed metal top helps with thermal dissipation as well as the doubled solder points below the doublers. A good implementation like this is a perfect example of a VRM that is doubled but still has great results. Intersil’s proprietary Phase Doubler the ISL6617 is basically the best doubler there is as far as circuitry and price. 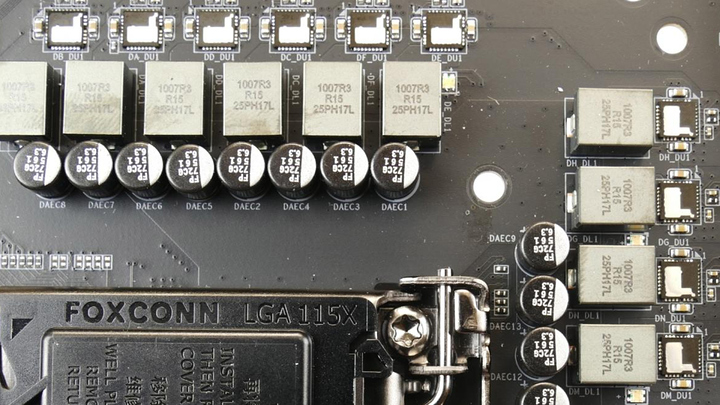 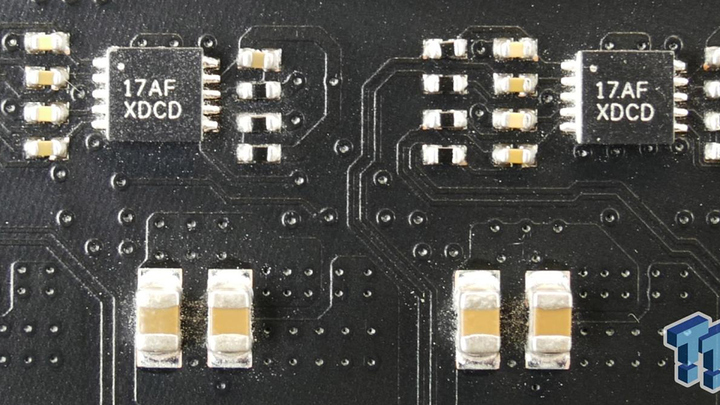 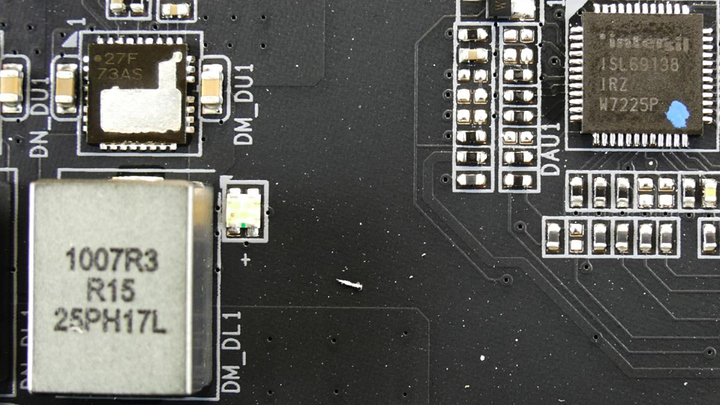 Yeah the higherend intersil implementations are nice indeed.
But there are also pretty expensive part.
Especially if they also used a doubling scheme with isl6617 phase doublers.
Those are the said doublers that do current balancing.
But they are pretty expensive doublers.

Wenn it comes to IR doublers the IR3598´s also can do load current balancing.
On which the IR3599 is just a dumb quadrupler.