I’ve been using the Samsung C32HG70 as my main monitor for over 6 months now and just recently ran into an issue when updating graphics drivers. I always do a clean install (glad AMD gave us the option ever since the Crimson driver update instead of having to use DDU) but for the last 3 driver updates I’ve been having trouble when my PC restarts right after it uninstalls the drivers.

The C32HG70 just shows a black screen, apparently looking for a signal for hours before finally letting me log in. I actually waited it out the 1st time but the 2nd time I wasnt running errands after the update so I started troubleshooting, clearing CMOS, switching RAM, and was just about to flash GPU BIOS but for whatever reason I decided to plug in my 19" 900p emergency monitor and boom, instantly saw the boot logo and a couple seconds later the lock screen.

After the new drivers installed I switched back to the C32HG70 and it worked just fine but whenever I shutdown or restart it will do the same black screen thing for a random amount of time before going to the lock screen and I can log in, only a couple minutes at most but still kinda annoying when the OS is on a 1TB 850 Evo in excellent condition. On the 3rd and most recent driver update, I figured I’d just switch to my simpit monitor, the Microboard M340CLZ, because I wanted to rule out that it was just the C32HG70. Well, the update was finished completely in less than 5 minutes, as it used to be.

I can attribute this problem to the firmware update I did on the monitor a couple months ago, it wasnt happening before then. I know the obvious solution is to try and roll back the firmware but the thing is that it fixed this issue: 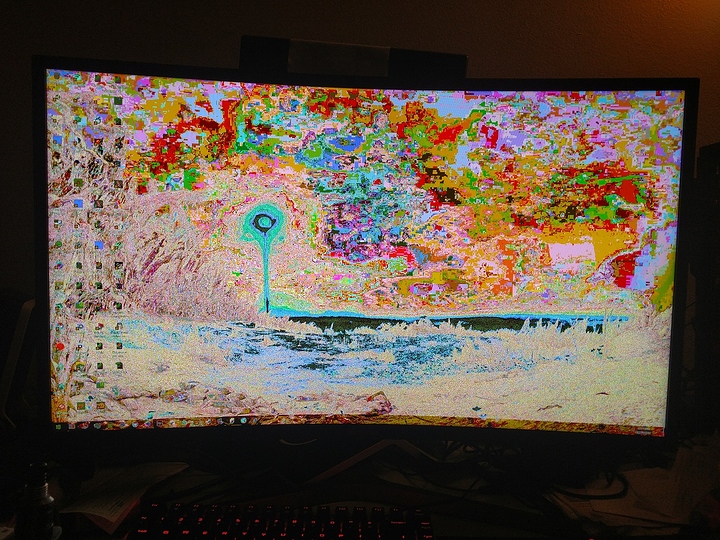 This was something that would happen nearly every time the monitor would wake from sleep mode, but would go away after about 30 seconds to a minute. Now that the monitor’s firmware has been updated, I never see the boot logo screen and it takes a few minutes to get to the lock screen so I can login, with the display input signal flashing like its receiving intermittent signals. However, when I switch to any other monitor it boots instantly and I get to the lock screen within 10 seconds as it should be.

Not really expecting a solution but wondered if anyone else has experienced this with any monitors before or knows the reason why (i.e. some kind of internal monitor processing thats making things worse as they often do…)

I also have issues with my AMD R9 290 and multiple displays. It is not the same as yours for sure but it is odd and my be related so if anyone recognises or know a fix… traling off.

For me I have 3 monitors, Display Port (main), DVI and HDMI.

When all three monitors are on they all display fine. but when I turn off the Display Port monitor then the DVI will also drop out, the monitor is still on but it no longer has a connection. If I turn the Display port monitor back on then the DVI also wakes up again. The HDMI works fine in this situation and takes over as the main monitor.

As for the why of this situation, I use the DVI monitor at night as it is the biggest screen for watching videos in bed. I is nice to have the other monitors off for this as they are doing nothing and it is a bit of a waste.

I can side step this by first either turning off the HDMI monitor or unplugging the HDMI cable and the i can turn off the Display Port monitor and the DVI will keep working fine. Just an odd set of circumstances.

I’ve had issues with AMD’s built-in clean install. I don’t remember the exact details, but something was wrong after a “clean install” that was resolved by using DDU as normal. So I would try reinstalling the old fashioned way, and maybe test both the new/optional version and the older stable release.

Out of curiosity, does the computer boot with no monitors connected?

That is really odd, but might actually be related. As far as im able to test, all I can conclude is that there is something funky with the CHG70. I’d try using another GPU but 1) it would still be AMD, the R9 280X and 2) I got a custom loop that isnt ready to be taken apart yet lol.

does the computer boot with no monitors connected?

Yes. No problems there. Probably should have mentioned that I have also used DDU while troubleshooting to see if it was AMD’s clean install utility, but it wasnt, the results were the same. AMD clean install has been working as intended for me and is more convenient than DDU because it takes one less step/reboot, no need for the ‘safe mode’.

I would not have even mentioned it if not for the similarities and the 390 to 290 relation.

Sorry to hijack with no searching on my own part for what should be a solveable or at least relatable problem. Just figured I would throw in while it existed.