Hi everyone, small question about the Phanteks Enthoo Pro. Does anyone know if you can flip the HDD cage 180 degrees ? Has anyone tried it ? I want to be able to swap drives without opening the second panel because its up against a wall.

Or just get a USB hard drive mount

It's doubtful that'd you'd be able to flip it around

You're asking for function in a case aimed at aesthetics lol

Even if you turn the cage around, you will get to the wall, and you won't be able to do anything...

You want case, that you can do that and have nice airflow? Fractal Arc Midi R2... Rotate and mount whatever you want wherever you want. You can mount the hard drive cage dangling off the roof, because it's mounting on a 120mm fan mount.

That cross-bar in the enthoo pro is actually completely removable, along with the 5.25 inch bays. I noticed they were held on with nothing but screws. Damn that arc midi is nice though, wish they made it in white.

You know you can completely strip it out and spray paint it, right?

That cross-bar in the enthoo pro is actually completely removable,

OK, there are two plastic brackets, that hold the hdd cage. The bottom one can be removed. Therefore rotated, since it's screwed on a fan mount. Now the top bracket is an unknown...

Yeah those modular cages are neat. I was mostly asking because Phanteks was pitching the Enthoo Pro as an enthusiast's "mostly screwed on, quite modular" case. Thanks for the info :). The way i noticed cages are held together, you can probably flip the top one too if you remove the 5.25 inch bay.

PS:
You may be able to just rotate the brackets on the cages themselves... 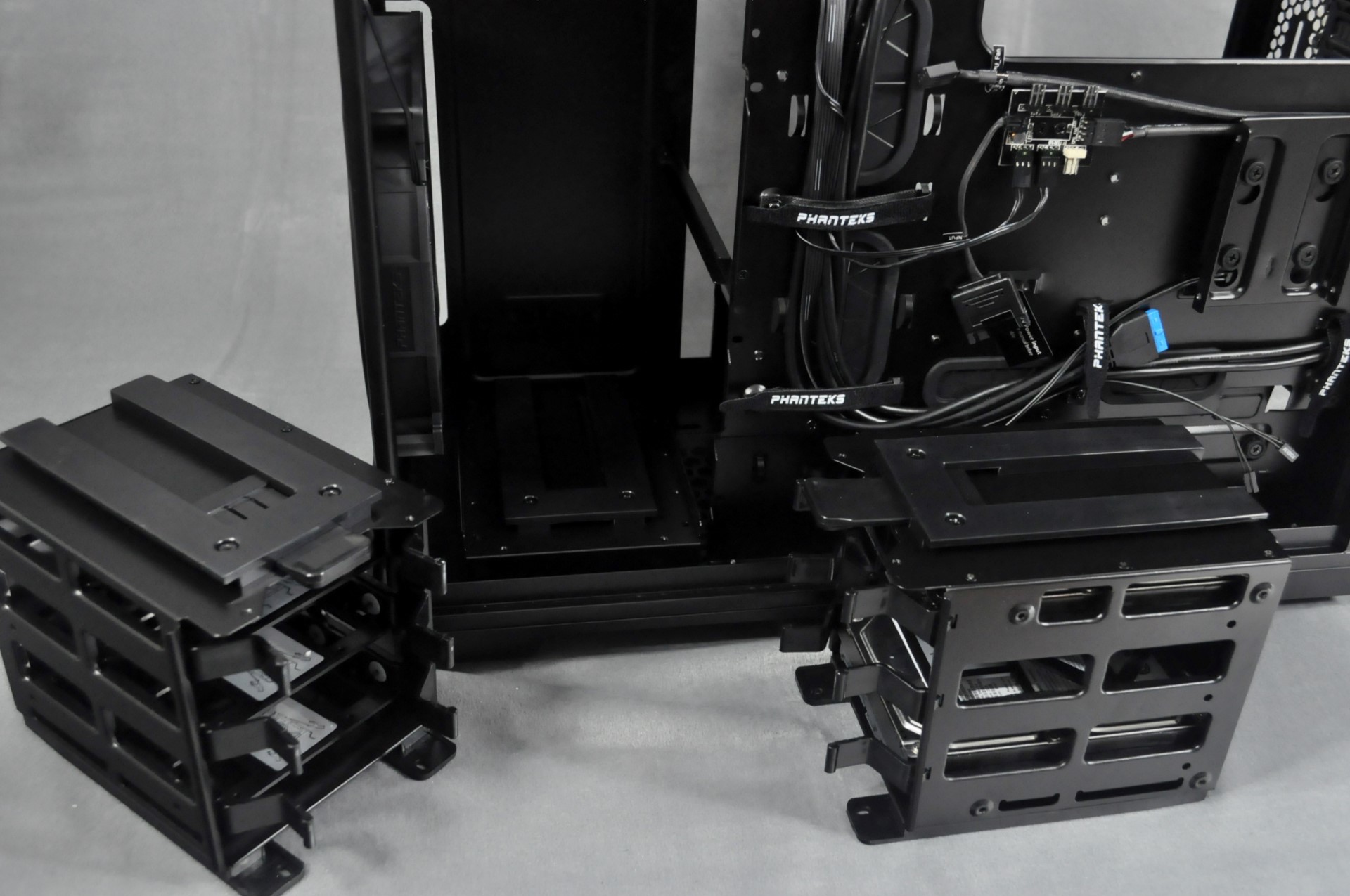 That can't really happen unfortunately, when i took the cages out on mine they were completely closed off on one side. Had some padding too so they wont rattle against the cross-bar. Even if you cut a hole, the locking clips on the brackets themselves won't work because they are sort of integrated to the cage, it's kind of a weird one-way only design.

You might be able to mod it to suit your needs if you're skilled enough with metalwork...

The brackets to slide the cage into the case can't me removed? interesting...

Shouldn't need to mod anything really if you do then it would really be just drill a couple screw holes. 95% of the case is held together by screws already. I know you can unscrew the plate hiding the drive cages. I have to find the mounting parts for mine to see how easy it would be to flip the mounts for the actual cages.

Edit: found my mounts for the cages.
The bottom mount is not mounted to the fan holes. It has seperate holes for the screws on one side and the other side latches to the wall.

As for the top mounts. They are easier to turn around but from the looks of it the tabs on them will fit in the holes but not actually overlap if you use the stock screw locations on the 5.25 bay.

You can remove the metal slab that's covering the HHDs and just unscrew the sleds and rotate them 180°. I took a look at mine and looks like it's doable.