Hi all, I have a kinda bad memory leak issue on my system, and I plan on isolating the process that is causing the leaks, but does anyone know if all that temp leaked memory will come back if I end the process with task manager? I know memory is returned to the system when you reboot, but will it be returned if I just end the service that is causing it?

I don't know if it's the same issue you have but I think I have a similar issue with Grand Theft Auto V. After playing for a while I get plenty of page file errors which after a while causes the game to start stuttering and after that freeze for seconds on end. I then check the task manager and my HDD usage is at 100%. But when I close GTA it all goes back to normal. But then again I'm not sure if it's the same problem, I'm kind of a noob when it comes to this stuff. :P

Sorry for late reply haha, but it is only memork leak if the RAM usage is high. At least to my knowledge that is. :)

In the way that you're describing your problem, yes, ending the process marks the memory as available.

Usually, the easiest way to identify the problem is to just open the task manager and sort by memory used. A lot of time it's going to either be a game or chrome. Chrome is really bad in my experience because of things like hangout integration and having a bunch of extensions.

If you are running Windows 7 I suggest doing Windows Updates.
We ran into an issue at work late last week where svchost.exe -k netsvcs (which is related to Windows Updates) was chewing throw every bit of memory it could get its hands on.

I would recommend looking at task manager and enabling the columns listed below. This can help in identifying the process taking all your memory. Image path name and command line are must have columns in task manager!! 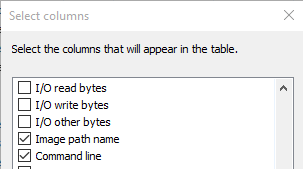