I answered a post on an archaic, 8 mo. old thread because I feel quite strongly about this issue. The post in question concerned hybrid hard drives but I got to thinking. . . What if mechanical hard drives are simply no longer economically viable? I mean, if they keep failing that isn’t economical even if they cost less. Recently I have been through well over a dozen hard drives and all of them report errors, suffer from cyclic redundancy, or flat out fail. Seagate drives seem to perform better but don’t last much longer. I’ve tried them in different units, tried them in various RAID arrays, used them with different CPU and GPU configurations and the result is always the same: MECHANICAL HARD DRIVES ARE CRAP. Now my older drives function fine but these are anywhere from 5 to 8 years older. They function fine on all the units the new drives consistently fail on. They function fine when I put them in my children’s PCs. They function fine when I give them to friends who are in a pinch for a mechanical drive. I don’t sell units with used drives but I have to say people might be better off using something tried and tested because I’m having considerably greater failures with brand new mechanical drives than I am with 8 year old hard drives. Yes, this is a rant.

Here is what I posted concerning someone’s inquiry about Seagate Hybrid drives:

I’ve owned a few and I don’t recommend them. My first one had to be returned after several Crystal Disc failure reports. When I got my first S.M.A.R.T. failure I returned the drive. Ever the optimist I purchased two more. Both presented issues. Then I tried putting them in RAID 1. This only made things worse. They definitely not to be used in RAID arrays. Here is the reality (in my opinion, of course) : If you’re looking for storage drives (and strictly storage drives of a mechanical type) purchase the very expensive enterprise quality drives or purchase the more rugged (and considerably slower) NAS drives. Better yet, use these for cold storage. That a 1TB SSD can be purchased for less than $200.oo should give us a clue as to what to use for operating systems. A cheap klunk drive will always be risky business so if your data is worth a lot to you pay the piper and avoid hybrids. << end self quote

I really wonder if mechanical hard drives are even worth it. I was hoping hybrids would be a step up but this proved not to be the case so I purchased two regular Seagage BarraCuda drives of the same storage capacity only to discover the same or similar issues. Yes, I could go on with this nightmare but I will spare the reader the gory details for the time present. Are mechanical hard drives even worth getting anymore?

They’re too slow, and too prone to failure as a single drive, but you can’t beat their price-per-terabyte cost if you need capacity.

Flash is still what, 10x as expensive as rust? Even for the slow stuff.

For me, spinning hard drives have only a couple uses.

In both scenarios there are redundencies in the form of RAID or simple file duplication. Mechanical hard drives are far from obsolete, but they do now have a more niche role to fill.

In RAID, you’re also looking at about 400MB/s reads (RAID 5 and 10, 4 drive), so the performance is nothing to really get bent out of shape about either. 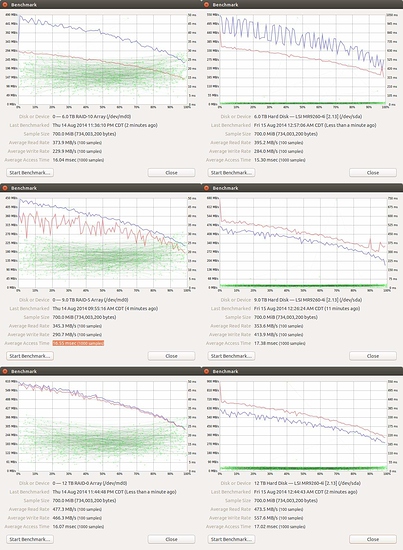 Sooo ok, just what is a “good” alternative?

SSD? Hardly…
-Limited write cycles (which get less and less with each iteration of cell bits, Two-Bit cells (MLC) stores only about half of Signle-Bit cells SLC, Tripple-Bit cells about less than half than MLC, same with now QLC) [Those are rough estimates and can vary a bit depending on the lithography process used.]
-That we even have a TBW “value” is sad.
-Controllers that fail and then nothing can be recovered off of the NAND.
-Users that cram SSDs full so TRIM, trash collection and wear leveling can’t work right.

-And before someone wants to throw the argument: “But you will change the SSD long before you reach such limits” No I won’t, cuz there is nothing that I would even upgrade to if it doesn’t promise a longer live-cycle.

Optical Disks (DVD, Blu-Ray etc.)? I don’t think that is in any way even worth mentioning…

Tape? Nah… Except ofc for backups.

DNA? Not in the near future,

Bacteria? (Is more or less DNA) Same as above.

What else is there?

Personally I seldom had problems with HDDs, though I haven’t had much contact with high TB HDDs, but many of them use technologies that are quite good at reducing reliablity imo, like SMR , weird multi-track writing/reading, and what? Helium, great now you’re almost certain to not get your data back if that fails. (From a data recovery service for example.)
And yes I’m aware even HDDs have a “write-limit” though with HDDs something else will in 95% of cases fail before that can even be reached.

So I’m just rambling myself

Back in the Core2Quad days, I built PC’s for most of my friends who wanted Seagate’s in RAID 0 (bullshit consumer grade motherboard software RAID). They all died in a year or two at most.

While I’m fairly certain there isn’t anything specifically wrong with Seagate, I have stuck to WD drives, no RAID of any sort, and they all still work. Every one of them. Yes, including a stack of PATA ribbon cable drives in the 10GB - 80GB range. I’m running out of machines that can natively use them as the older motherboards with PATA connectors slowly die off.

That’s my highly subjective hard drive story that by itself really means absolutely nothing about the state of hard drives today.

Are mechanical hard drives even worth getting anymore?

I replaced my last HDD in late 2010 — so I’ve been rust- and failure-free for 8 years now. All of the SSDs I’ve ever purchased still work.

Although I fully acknowledge that HDDs still make sense for a small segment of the population (e.g. photographers, musicians, content creators), I think that HDDs still primarily exist because most of the population have become digital hoarders and don’t know how to “let go” of old data and “move on”. It’s a behavioural/psychological issue (dare I say “problem”?) that is powering the HDD market’s life-support system.

That said, folks should be free to spend their money on whatever they like — so if rusty dinosaurs are their thing then I’m fine with that. I would have preferred extinction to have already occurred, or to occur as soon as possible, but that’s just my preference. 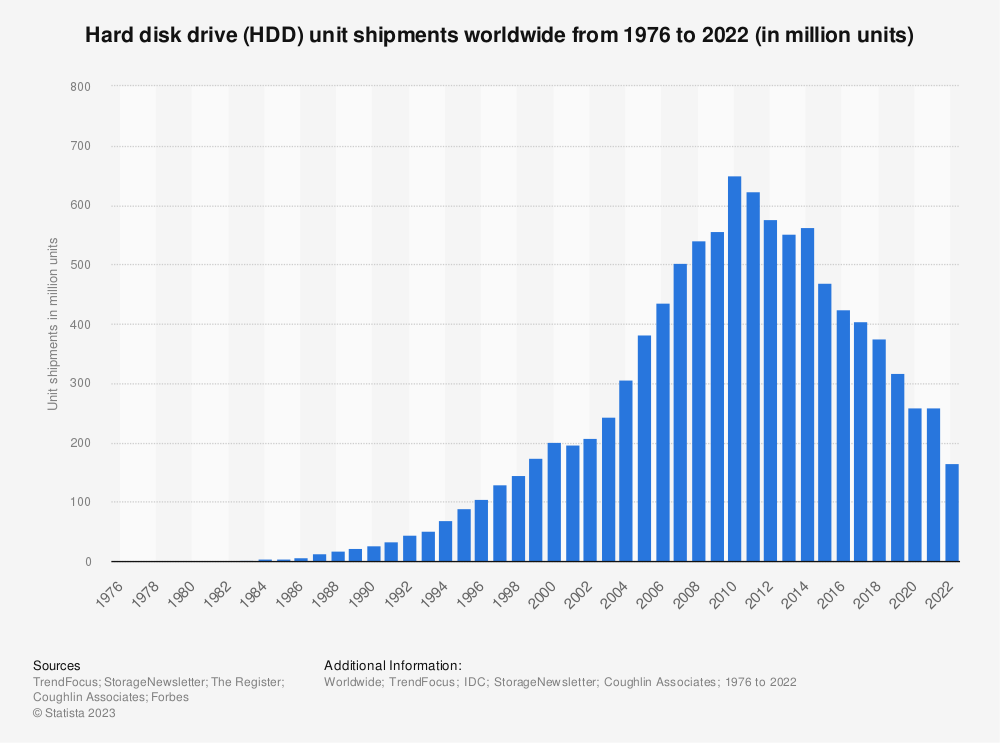 Recently the capacity of SSDs has exploded, and that trend will continue. The $/GB advantage of HDDs is being eroded fast. The dinosaur’s days are numbered. Ultimately all consumers will abandon HDDs — it is inevitable.

Still use spinning disks in a server crew.

Never had an SSD die on me crew.

If someone has a magnet I shoot on sight crew.

On a more serious note, I use spinning drives on a Dell R710 on XFS and they kick ass. I also have a spinning drive on an old Dell optiplex with FreeBSD and it kicks ass.

The dinosaur’s days are numbered.

Extinction can be a good thing:

Like others have said yes they have a place for mass storage simply because of $ per GB.

I personally believe that SSD’s are almost a must for laptops, desktops are a different story, but I can’t name you a single person who wanted to go back to a regular hard drive after switching to solid state.

Hard drives at this point are the #1 bottle necks of most modern systems, I can’t wait for them to eventually fall into obscurity.

Yeah, when I built my mother-in-law a PC out of my own pocket I couldn’t bring myself to even give her a spinning hard drive. That’s just more mean than I care to be.

You a fan of Redis?

Ah, it lives in memory, which is why I was asking lol.

That’s great and all, but I need the cheap and dirty stuff if I want to feed my disease (and associated redundancy/backups) 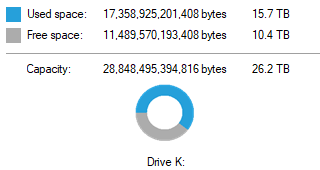 For media and backup purposes they’re still the king.

I have HDDs in the NAS for mass storage. Movies, .iso files etc. Backups are done on external HDDs.
Everything important is on SSDs though, even in the NAS. My desktops and laptops are SSD-only.

I’m currently waiting for the prices to drop some more. Once 4TB SSDs cost $500-ish, I’ll probably get rid of the HDDs in the NAS. At that point spinning rust will be for backup purposes only.

They make no sense in mobile devices, especially laptops now that have a staggering 1.8GhZ with a dual core ‘i7’ low power U chip that reminds you that 2009 GhZ speed is still sold in a new 2018 wrapper of smooth aluminum.
Seagates are cheap for a reason. With drives going up in speed, I disagree. Experience a 128mb cache drive and its not all slowness that the last decade has to offer. I’ve had plenty of NanD flash types die on me to a state that wasn’t recoverable. Data retention is still more solid on a HDD, but time will tell.

especially laptops now that have a staggering 1.8GhZ with a dual core ‘i7’ low power U chip that reminds you that 2009 GhZ speed is still sold in a new 2018 wrapper of smooth aluminum.

I’ve had plenty of NanD flash types die on me to a state that wasn’t recoverable. Data retention is still more solid on a HDD, but time will tell.

Yeah, the thing about data recovery on NAND vs HDD is that a platter swap is ~$700, but a chip repair is ~$2400. I know this from experience with both, through DriveSavers. 128GB SSD failed and had non-backed-up tax files. I know, I know, apparently the client, my father, had been getting an error on his backups for the better part of a year, but failed to let me know about it, and since he insisted on not sharing the management password with me, I didn’t have access to monitor them.

I remember back around the early 2000’s when MP3 players were a thriving experimental market.
Basically had a choice between 256-512mb of flash, or a miniaturized HDD in something that would jostle around in a pocket.