Mastodon just opened their European tour with a near 2 hour long set  in Dublin , Ireland at a sell out show, about an hour and a half ago from me posting this.I must say it was f***ing awesome they usually play here towards the end of the tour and the energy is not as powerful but tonight it was By far the best metal gig I've been to in a long time the energy was amazing the entire floor was nothing but mosh for bladecatcher,crystal skull,aqua dementia,black tongue, blasteroid and a few more ,

The set as i said was the guts of 2 hours compared to the normal 1 an encore, they played almost everything Bar their cover of thin lizzy's emerald which would've gone down a storm TBH.

Anywho  got only one good picture out of the 5 I took as you can't enjoy a gig taking pictures all the time, The pics from last years gig were better.

I stood a bit far back i wasn't about to throw my neck out again in the pit ,also taken on a HTC one S and the blue lights did not help. 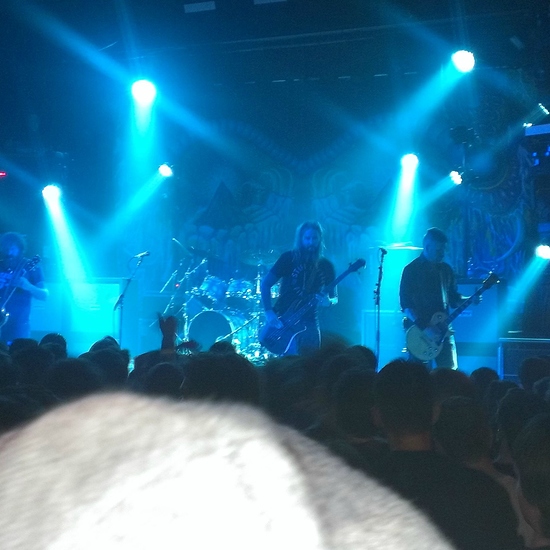 I thought it would be nice to share with yall. ;)

I have seen Mastodon 2 times here in the states and I've really liked their live performances, I'm glad you enjoyed their set :)

I saw Mastodon in downtown Raleigh at Hopscotch this year. It was epic.

They Played Atlanta (their hometown) back in November but I was to broke to travel to see them....still regretting it.

I'd like to see them some day, but hardly any metal bands come near me (I live in New Jersey). Crack The Skye is a damn masterpiece, might I add.

Seen them once, they were incredible. One of my favourite bands of all time by far!

Awesome.  Huge Mastodon fan here.  Haven't had a chance to see them in person but I have always heard that they are amazing live. Did they play Mother Puncher or Iron Tusk or March of the Fire Ants?!

I've seen them 3 times and wanna see them 100 more times! I got to meet the band at a Meet/Greet at Mayhem Fest 2013, Great people, was able to get my custom Crack The Skye Phone case signed by them. They are definitely one of my fav bands of all time.