A video game fan coughed up blood and dropped dead in a Chinese internet cafe after playing World Of Warcraft for 19 consecutive hours without a break.

Wu Tai, 24, went to the unnamed internet cafe in the Chinese capital Shanghai to play the latest installment of the role-playing fantasy game alongside other fans of the popular series.

CCTV footage shows him sitting in front of the computer and suddenly turning to his left to cough violently, before slumping in his chair and dying in front of shocked fellow gamers.

Footage of the incident shows Mr Wu repeatedly coughing in front of the computer screen before slumping back into his chair.

Horrified fellow gamer Hsin Lo, 20, who was sitting next to him said: 'I suddenly heard him groan and when I turned to see what had happened he was very pale and looked uncomfortable.'

'He was dabbing his mouth with a hankie which had blood on it... I asked him if he was OK and he said he'd felt better and that he would be OK,' he added.

Concerned onlookers called an ambulance for Mr Wu, who is understood to have continued playing the video game while waiting for the paramedics, despite clearly being seriously ill.

Before the ambulance arrived, Mr Wu was seen looking pale and ill while still sitting in front of the computer.

'I called for an ambulance while my friend went to get some help from staff. But while we waited he just died in front of us, and was nothing for the staff to do,' Mr Hsin said.

When medical crews arrived they tried to resuscitate Mr Wu but he was already dead.

A police spokesman said: 'An autopsy will determine the cause of death but there seems little doubt his playing on the computer for 19 hours instead of resting contributed to his death.' 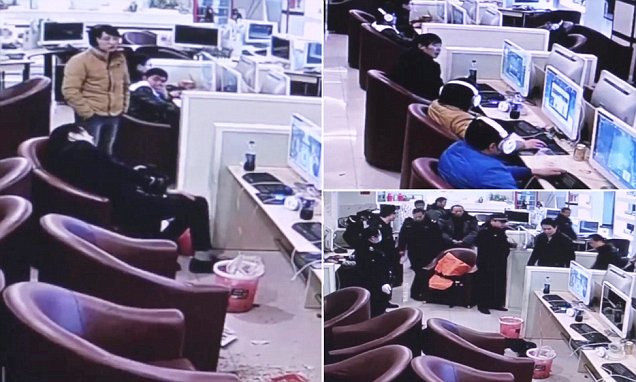 Man drops dead after playing World Of Warcraft for ...

Wu Tai, 24, went to the unnamed internet cafe in the Chinese capital Shanghai to play the latest installment of the role-playing fantasy game alongside other fans of the popular series.