So I had just ordered a screwdriver that fits my old MacBook pro 2013 to see what’s up with it and if I can do anything about it in the process of cleaning my room and stuff like that and every time there is that thing in the corner looking for help and no one gave it any attention since a good year now. Even the authorized mac repair shop ignored it and only offered to replace literally every single component in the chassy for more than the notebook is worth.

All I did was literally open it cleaning some of some MAJOR dust with a cloth specifically for dust cleaning (witch could actually be a bad thing if rub hard TBH xD). Then took the stickers off that said only for authorized personal etc break warranty sure (not like anyone cares at this point in time). Then I saw not actually too much wrong other than minor signs of possible water damage on mainly what looks like the wifi card. https://imgur.com/a/bK6spT9

Now first what do you think happened that made it work? Anyone had something similar?
My theory at the moment is: When I opened it the battery looked like it was dead (looked as if it was bloated a little), then I looked again and it was literally all just dirt. Maybe there is some kind of sensor that stops the PC from booting if the battery is bloated? I’m kinda mainly looking for reasons to trust the device and not assume it’s just a temporary happening for reasons beyond my understanding and tomorrow it won’t boot again.
I mean the other theory is the night before it died I was in some caravan on vecashion with a friend and the nights where like legit freezing cold and then it got like almost, if not, 30° every single day. So you´d think condensation happened in the wrong places and it just took a LONG time to dry. But I thought exactly the same and tried to charge and boot it about 1 months after the denied repair shop experience and that was like a week after it didn´t work anymore, witch I believe is plenty of time for it to dry.

Since there was a lot of cr4p on the Mainboard and some of it looked like water damage, especially on the WiFi card, I ended up doing some cleaning. How do you usually clean old Notebooks that are grothly gunked up. Usually I just use a compressor, but that would not have done the trick this time around.

I actually ended up spilling a bit of flavored mineral on it in school, so that’s would be where water damage could have originated. That was like 1 1/2 years before it died. Though it wasn’t exactly a whole lot and a friend was literry screaming his soul out about it next to me, grabbed my Mac and turned it upside down in a matter of like 0.5 seconds. Like, it was actually redicolous. I thought I was saved by his ninja reflexes, but apparently some made it threw or it was condensation.

Would be cool if it just works because I could use a Mac to try IONIC or ReactNative trying stuff. I’m pretty sure you need xcode to compile the iOS version, even with those frameworks. Almost feels like I just made 1000 bucks out of thin air. So it´s not really replacing any machine and I wasn’t really gonna buy a Mac again, since at this point I think only the touchpad and xcode would be reasons for me to have one (and the touchpads got pretty good on other machines too). But nice free additional thing if it works for that purpose. Or sell it ASAP to some poor soul as long as it still works lul.

Got some 96% alcohol from my grandma (grandma got it all) should be fine.

But I don´t think I´m gonna rip the mainboard out, because there is so many god damn connectors and I´m probably just gonna break one of them I feel like. Also some screws don´t really seem to go out because the screwdriver is like too small even though they are supposed to be the same screws. 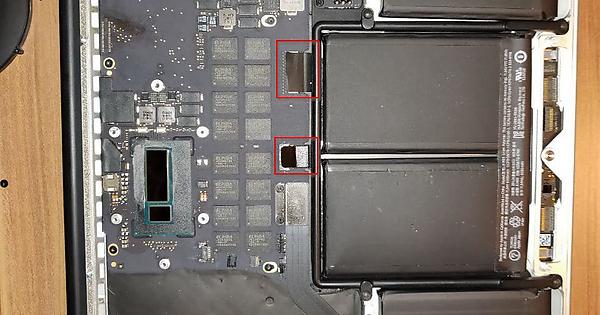 At least I cleaned this side, cpu thermal paste replacement and the fan.

Hope I didn´t send it back to the dead.

Ok so it still works. Dunno if I should feel stupid now or genius. Since I don’t even know why it works.