My pc is clogged up with hdd's
I wanna make a nas, but if I have to leave it online all the time,
I want it to quietly sip the power in a corner

Raid don't really matter to me much, although I PROBABLY should have some redundancy

This will be for movies music and videogames.
Not for work or anything

Obviously, it needs to be strong enough to operate properly,
And I'd like gigabit Ethernet,

On a side note,
Uhh, Comcast is talking their shit about 2gig fiber,
What would I have to do to upgrade my computer and network to support two gigabit?
B/c right now everything in the home is 1gig Ethernet

I don't know all too much about this stuff, but this would be where I started to look. This should be really efficient (hell, look at the cooler, it can't use much power at all). Wendell did a video on something like this, so you can check that out. 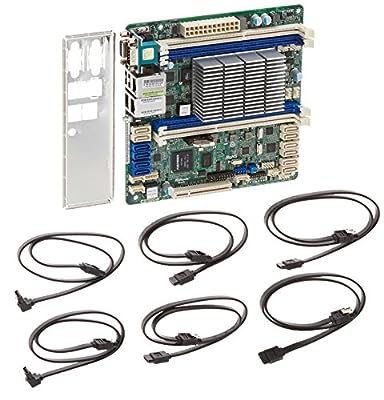 Pair it with something like this and you are good to go. 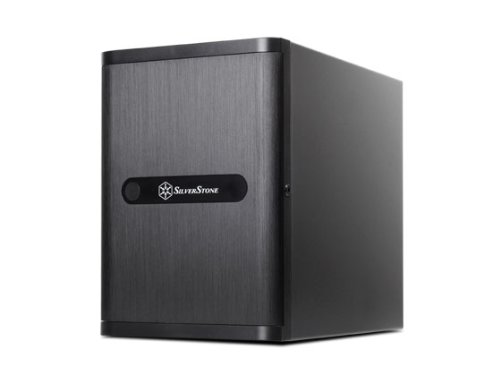 For users migrating to small form factor (SFF) computers with large libraries of media files, storage capacity is often a compromise that is difficult to overcome. Choosing a smaller case may require ...

Now, I don't know how well Seagate's archive line would do with a nas type of situation. Those things are meant to be used to archive things, so basically long term storage. Using them daily seems iffy. However, iirc, they are designed to have decent read performance, and should be able to do what you are wanting. I would go with HGST or WD Red because of the low failure rates.

Uhh, Comcast is talking their shit about 2gig fiber

I don't know why you would want 2 gig. most home devices only have a 1gig port. you would have to have multiple devices downloading at once to saturate the connection.

As for nas I have a hp proliant m54l microserver. it has 4 bays. Soon I will have it with a 32bg msata os drive and 2 4tb hardrives while I wait to fill up and expand the array. When it is together I will let you know how it runs.

the reason I brought up the 8 terabyte archive drive is that it would mean we just filled with movies and music
therefore it would only be reading and only once in awhile just to stream said media
Would freenas keep those spinning 24/7??
Or only wake the drives when I want a file?

It would be great if it cached the file / folder structure and only spun up the drive when I actually requested a file,
and not when I just wanna sort through the file list

not exactly what I would call a "daily" hard drive

As far as the 2 gig fiber goes, I'm not aware of anything between a 1 gig nic and 10 gig nics. You can get used SFP+ 10 gig fiber optic nics on ebay for pretty cheap. I got mine for $35, but the 10 gig RJ45 copper based nics are still pretty expensive even for the used ones, $300 or more.

I wouldn't go for 8TB drives, especially not seagate, my current trust in them is low and 8TB drives are new. You can easily get what you want with 6TB or 4TB drives. 6TB hgst is around £230 and WD red £190 with the HGST having the best reliability.

Im not streaming off the nas, I'd COPY the file off to my local machine and play it off that

And the only 2gb computer would be my personal one,
Everything else is fine at 1gb Ethernet

But I'd need the uhh, whatever their modem had, to my pc to be the 2gig
Then from my pc to the nas and splitter and router ect to be 1gig

Basically my pc is big-mc-hugenasty. And everyone else in the house doesn't need massive bandwidth

There is no way in hell I'm getting Comcast fiber at the moment, but if the town gets wired up, the prices may become reasonable down the line, and I'd like to be ready for that

They said installation is only $1000
I don't need the service, but just having the lines in place would be cool too

LOL how about less than 80w? I built a freeNas box last spring (media server) using one of these...

I think the CPU is 35 or 40w, threw in 5 - 2TB WD reds, and a 450w PSU, using a kill-a-watt meter the total wattage under load was 78w but yet it has enough power to trans-code media streaming to a couple devices at the same time, of course it runs headless so no video card overhead, but it just sips power.

It's only job is to archive my files,
And when I want a movie, copy it back to my pc to play it back

My nas drives don't spin down since I have several programs like owncloud and transmission that run 24/7 and it's better for the longevity of the drives if they are not constantly being spun up and down. You can cut the overall power draw down quit a bit by allowing the drives to spin down while idle but there will be a lag when you try to access the drives and they have to spin up. The atom cpu's seem the best for low power draw in a diy nas, but I believe these are embedded solutions so you won't be able to up grade the cpu later. That's why I went with C226 motherboard and an i3. I can always throw a xeon in there if I need more horsepower.

Well, if its JUST A NAS, why would I ever need to upgrade the cpu?
And I don't mind a bit of a spinuptime
I'm more worried about power draw, as it will be intended to sit there and be on FOREVER.
It will only be active long enough to transfer a handful of videos
Or a game ISO or installer, then spin the drives back down

Anyone make a raspberry pi into a nas?

You do not know what crazy ideas you get when using the NAS.

Question: Why would you use freenas when you are not planning on running ZFS? A Linux box with a few samba shares would be enough, right? You do not even need ECC RAm for that.

Raspi is a) too slow and b) all the nick-nacks you need for it to play nice with a couple of drives easily amounts to a cheap mobo+CPU.

What about a preconfigured NAS box? Seems to me that your needs are "just storage" for media.

You do not know what crazy ideas you get when using the NAS.

This is exactly right. The first one I built was small with 4 drives that used very little power, but now I have a beast of a machine that has 12 drives and runs 10 different applications and serves media to every device I have at home and away.

You can buy a NAS box like a Synology but to get a box with enough capacity to be worthwhile is very expensive and I doubt the power usage would be less, but anything is possible, I looked at a lot of different storage options back when I built my box and the best bang for the buck was to build it yourself....in fact I built two but the file server uses over a 150w but it's job is more important to me but it's still kinda' low power.

well the entire point is to take all of my hard drive out of my existing tower and stick the data on to the network
so that my pc, will only have solid state media

because I have noticed whenever windows decides to poll a hard drive,
it actually activate all of the units in the computer which makes everything lag a little bit for that few seconds,

I could just add a bunch of hdds in my personal rig, and Thad serve my needs just fine,
It would keep the power consumption about the same as it is now

But the general idea was to get all my slow data off the main pc, but since it would be on all the time, I want it to take as little power as possible.

It's only job is to move a few gigabytes worth of files at a time, on demand.

I don't care WHAT system it runs, as long as I can get to my files from my windows pc, from the network tab in "my computer" just like if it was another laptop or something

In my case I don't think the media server portion of the actual server requires more power, when I tested after building it's idle usage was a little less than 60w, that was before the media portion was installed or configured, the problem is that hard drives and some type of OS for a file system and connectivity comes at a price in power usage getting below 100w on any system that is going to serve up files might be a difficult task.

I just try not to feel like I'm leaving a light on 24/7
So it seems I'm ether at, load my tower with more drives and suffer spin up time lag

Build a nas, and have a constantly power consuming device killing like 80w

I do understand, in my local and our cost per KH, I figured the cost of that server running 24-7/365 was almost $50 a year which is nothing to sneeze at...lol but in our case we have two others that run 24-7/365, along with two work stations that never get turned off so I'm sure we are paying another $200-$300 a year just for the always on convenience and the limited data integrity of the systems always running, of course one of the servers provided CCTV security and is better running than not doing it's job, like I said there are always trade-offs and costs.

Is money no concern here.. Or I assume it must be as you want minimum power. I was going to suggest why not just go all SSDs?

WD reds have fairly low power consumption, but the fact is its going to consume power. Your basically already paying for that power justnow with the disks in your system. Its not like your driving a graphics card etiher, you talking low powered CPU with half a dozen disks. Its not much.

If you only want 4 disks, go for 6TB WD reds, or HGSTs, youll get some redundancy out of that and get the capacity you want. and with one of the motherboards suggested youll have plenty of expansion.