Looking to downgrade hardware, Should i go for AMD APU or 12th gen Intel?

Hey all, I’m planning on downgrading from my i9 10900/64gb/Titan V to something like an R5 APU or i5 12th gen with IGPU due to not wanting any noise from a desktop tower at my desk and not needing anything that powerful anymore due to having a thinkstation with Threadripper PRO and Tesla A100 GPU that i now remote into and do all my work on in another room… I will be using 1x 32’ 4K display and 1x 24’ 1080p and a 2005 Dell 17’ 1280p monitor what all are using VGA/HDMI to DP, would i need another GPU to be able to use all the displays or is there any boards that can use 3x DP on a IGPU? if so I have a Quadro T400 i could use but id prefer not too due to more heat and some more noise at my desk (what im trying to avoid)

If fan noise is an issue for you, Intel 12th gen should not be on your shortlist. You may want to investigate 9th or 10th gen Intel, but their IGPU is rather poor so a dGPU is pretty much a requirement. Unfortunately, AMD APU’s aren’t (much) better either: anything from 2nd gen Ryzen (Zen+) to the current offerings use the GCN5 platform. While not bad, for an IGPU, it’s not comparable to anything you currently have in use.

Intel 12th gen should not be on your shortlist

AH… bummer. i guess might see if i can reuse my 10900 and buy a new motherboard thats SFF and put the T400 Quadro in it and wait until APU advancements.

IIRC, Ryzen 7000 series APU’s will have Navi or Navi-2 iGPU onboard. Intel is about to launch their new dGPU lineup (if they haven’t already, didn’t check) and those are rumored (!!) to trickle through into some next gen Intel CPU, whenever that happens.

Let’s look at this another way, what COOLER are you using? Maybe we can look at something that cools more effectively

Corsair H100x at ‘silent’ profile but still sounds way too loud for my liking.

Any 65W or less CPU with integrated GPU on a Mini-ITX board inside a case like the Streacom DB4 or similar. No fans. Bonus points: its pretty. 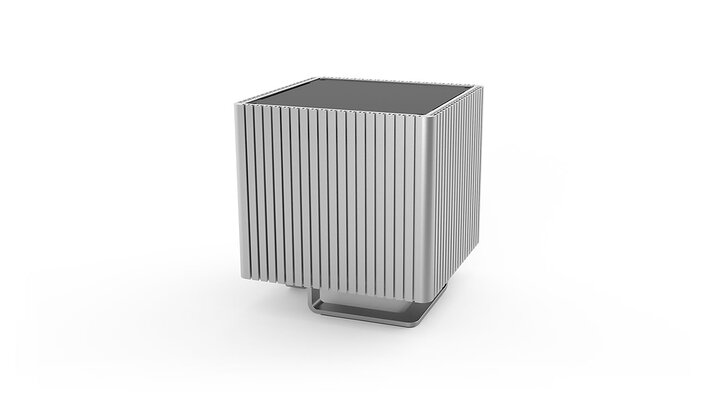 Another good contender would be the M1 Air. Fanless. No moving parts. Great responsiveness. Assuming of course you are okay with MacOS.

what about the ASRock Fatal1ty B450 Gaming K4, it got dp hdmi and a vga with a ryzen apu. People tend to underastemate how loud high end pc’s are. when they are working hard

12th Gen intel is a perfectly valid option, and the built in graphics make it almost a no-brainer for this use case if you are buying new - idle power is basically a draw with current Ryzen’s and becomes a win when you remove the power of a dedicated graphics card - and the CPU performance is not compromised like AMD’s integrated options. There are 35w T processor options available, and loads of motherboards that support four outputs from the onboard graphics (where most AMD motherboards only seem to support two display outputs).

Really though, can you not just take out your Titan gpu and run your current setup from the onboard graphics?

I’m on 10th gen Intel and my motherboard supports four outputs at once, three digital and one analogue - you might need to juggle some things about and get some adapters but this shouldn’t be too much of a challenge for the monitors you have listed?

If the computer is still loud, fire up the ‘Intel Extreme Tuning Utility’ and turn the Turbo Boost Power Max and ‘Turbo Boost Short Power Max’ right down - say to 65W - the processor will then run in a much less thirsty mode and hence run a lot quieter, assuming your fans are properly set up.

I’ve just tried with my i5 10500 and turning the power limits down to 35w meant it ran all cores 3.1ghz when doing a handbrake encode instead of the more normal 4.2ghz.

Hmm I completely forgot I had a i5-10500 aswell. I might give it a shot with that or if I need a little more umph I’ll do the undervaulting with the 10900 Since all I’m really wanting from the new silent setup is a few displays and being able to watch Netflix as I’ll remote into my workstation in another room if anything intensive is needed.

NT-D15 might also be something to look at, pump has to be the loudest thing in his rig

Does it help to go to bios and turn off HT and similar things?

Is HDR on more than 1 Monitor a concern?
If not, then Intel Xe Graphics, i.e. what is available in Alder Lake should be more than enough.

Internally, even the Desktop Alder Lake CPUs have 5 DP-Ports available, each DP 1.4 capable if the Mainboard has the required Re-drivers built in. Though the most I found was 2 DP 1.4 Ports plus 2 HDMI 2.0 in a business 1700 Socket Board.

AMD on the other hand reuses the notebook APUs for desktop (Renoir and Cezanne), so they have more GPU compute than Intel on desktop (in exchange for less IO). But because the AM4 socket is older than those GPUs, you will not find any mainboard that actually claims to support DP 1.4, only DP 1.2 (well some claim DP 1.4, but only HBR2 / 4k60, so bandwidth limited to DP 1.2 specs, which is technically correct). Also the AM4 Socket only includes 3 DP-Ports (this may also be a reason for limiting these APUs to DP 1.2, even though the same APUs can do more in notebooks, without the socket). Since the current gen AMD-APUs use older GPUs they also have no modern hardware decoding, such as for AV1, like Intel has (fluent 8K60 HDR on Alder Lake), if that is relevant to you.

So in my opinion, as long as you do not game or do GPU-compute heavy stuff, Intel has the superior solution, because it is more up-to-date and the mainboards actually come close to offering all the features the GPU actually supports.

Edit: DP 1.2 suffices for 4K60, but if do not have access to all 4 DP ports, one can split up the DP 1.4 bandwidth into 2 4K60 displays to circumvent the port limitation.

I’m on 10th gen Intel and my motherboard supports four outputs at once, three digital and one analogue - you might need to juggle some things about and get some adapters

10th Gen Comet Lake as well as 11th Gen Rocket Lake should still be limited to 3 screens at the same time.

Only Tiger Lake and Alder Lake support 4 active screens simultaneously on Intel’s side.
Plus, Xe made a huge leap in performance to catch up with AMD APU graphics (in the U series with full complement of EUs).

But for a pure desktop workload 10th Gen will probably still be enough.

If you’re looking for [relative] quiet… Have you looked at Noctua’s H1? [granted CPU being 65W]

OP, what kind of case will you be using? (this may dictate cooler types)

I’m a big fan of the 5700G APUs, can’t beat the onboard GPU you get with that, and they run exceptionally cool for an 8 core chip. Most 120mm tower coolers would be virtually silent and overkill for cooling.