Hello everybody,
This is my first post and I hope I’ve chosen the right category. If not, please point me in the right direction.

I’ve been watching L1news for some time now I chose to ask a question here that’s been on my mind for some time.

My current PC is an Intel Core i5-6500 CPU @ 3.20GHz with 16GB RAM, a GTX 1060 6GB and a Corsair Force MP510 NVMe SSD. That’s more then enough for me personally since PC gaming isn’t my main hobby for over a decade now. Since the start of the “human malware” I took on streaming with a friend on Twitch with a “chat and talk” show. All fine and good but when I want to edit videos my rig isn’t really anything to talk about. Roughly you can say an hour of video at 1080p renders an hour.

Now with the all shiny new hardware popping up (Ryzen, GTX 30** etc) I’m tempted to spend my Christmas pay on a small upgrade. I was thinking of mainboard, CPU and RAM and later on in 2021 a GPU.

Question to the audience then is: given a budget of 500 - 750 Euro for the initial Upgrade, what would be best? Let me recap the functions my PC needs to do in order of importance:

Thanks for any help on what to do or which hardware to avoid.

Have a nice day.

For your current pricing I’m thinking, only upgrade motherboard, cpu and RAM for now, rest can come later. Here is a good package that should do everything you want it to do with current-gen hardware, I assume you will be keeping your case, GPU and PSU.

Thanks for the quick answer. As I said, it’s going to be Christmas money, so there will be no purchase prior to December 1st

On the software side I’m running Windows 10 Pro 64 but the programs are mostly open source OpenShot, OBS, Libre Office, Thunderbird, Gimp etc. Its all a hobby (the video editing part) and I’m far from shelling out cash to Adobe and others

Honestly, if the video editing part is the only part you’re complaining about and you’re looking to still keep a budget, I’d just upgrade the CPU/MoBo/RAM and carry everything else over.

Should have you up and editing/streaming just fine for a bit, and shave a bunch of time off that editing.

Thanks for your answer.

So I’ve waited and it looks like AMD Ryzen 5 5600X is going to be my CPU of choice (provided my supplier gets it) Now to keep thinking ahead I’ll be holding on to my 1060 for now but I need a motherboard and RAM.

RAM will be along the lines of G.Skill Ripjaws V 16 GB (2x8GB) DDR4-3600 CL16 Memory but I still need a motherboard and here is where it get’s a bit fiddly. Literally. I want to get my PC off and under my desk. But since my desk has drawers I’m left with 32cm of clearance with 25cm possible width. This leaves me with either a µATX or mini-ITX board. Does the kind folk on this forum have any suggestion on this for me?

Again, thank you for your answers.

How about this thing of beauty? 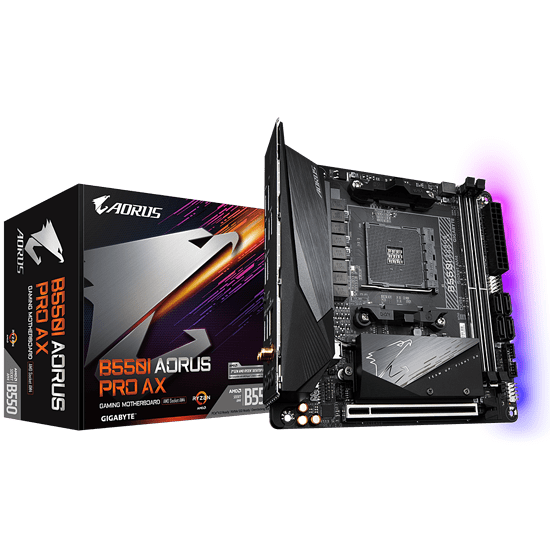 
B550 but since there is only one PCIe slot it doesn’t need to be X570. Same VRM as it’s bigger brother, intel Lan… And it’s not super expensive. Locally it’s way below 200€…

PS: Ooops, sorry… The LAN is Realtec. The WiFi is Intel…

PS: Ooops, sorry… The LAN is Realtec. The WiFi is Intel…

Realtek LAN is no bother in Windows or Linux, it’s Realtek Wifi that might pose some problems and then only on Linux 5.8 kernels and lower. (e.g. should be out-of-box for the 2021 spring releases of most distros)

Another contender if you want an even cheaper option is the Aorus B550M Pro, should go for around €120 or so. It’s one of few “decent” mATX boards. 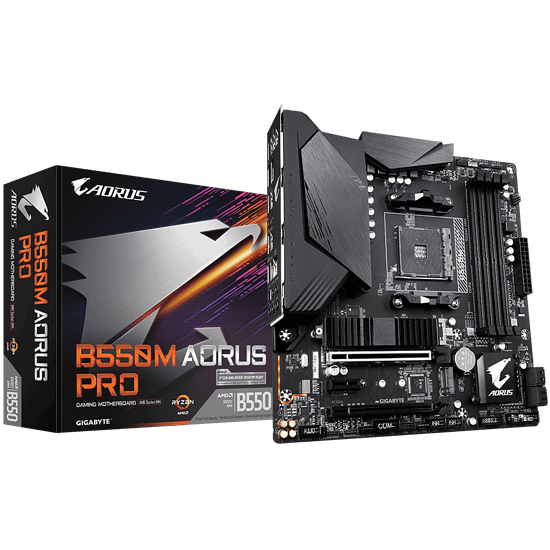 Thank you both. I think the B550M Aorus Pro is the better choice for me simply because I have “a lot” of USB2 peripherals that need plugs

Now the CPUs just need to show up in stock…

Oh, one more thing: if the MoBo come with a Bios version that needs updating prior to use with a 5600X: does this MoBo support it without installed CPU?

Oh, one more thing: if the MoBo come with a Bios version that needs updating prior to use with a 5600X: does this MoBo support it without installed CPU?

Both boards have it.

Since you helped me a lot deciding I thing it’s fair to let you know on what I have decided: AMD Ryzen 9 3900X Gigabyte B550M Aorus Elite 32GB G.Skill RipJaws V schwarz DDR4-3200 DIMM CL16 Dual Kit As soon as the parts arrive and are stuffed into the case I’ll let you know the results