This guide is now 1 year old!

If you have an old Samsung Galaxy Tab 10.1 sitting around gathering dust with its old Android 4.4, heres’s how to get a real operating system running on it! Took me a few days to get this working on mine with the thankfully existing but outdated guide so I’m sharing this you don’t have to go through all the pain I did.

Massive props to Github users exception13, X-Stranger, thermatk and mikkeloscar for providing the original how-to’s and source code. You some cool dudes.

FYI, I’m going to be referring to the Samsung Galaxy Tab as the SGT from now on.

PART ONE: The kernel

Unfortunately, since the kernel the SGT uses is so old, it can’t be compiled using GCC version 5 and above.
If you already run sonething like debian Jessie, you should be fine, otherwise there are 2 options, run a chroot of an old distro or use VirtualBox to run an old distro. I chose to run a virtual machine of 32 bit Ubuntu 14.04.5. You can use 64 bit but we’re working with 32 bit arm and you have to install extra packages on 64 bit to get things working and I don’t want to deal with that.

PART 1.1: Setting up a virtual machine

So, install virtualbox and download the 32 bit iso of ubuntu 14.04.5 from here or from a local mirror.

For better compatibility, replace all mentions of jessie with wheezy. It’s an older version but still supported for now.

You probably want more that a terminal login when you start up for the first time; especially since you don’t have a keyboard.

Or, if you’re don’t feel like doing any of that, you can download these pre-made recovery and SD card images:
Recovery: download
SD card: download
Just unzip and write the SD card image to the microSD card you want to use using dd or equivalent tool and resize the ext4 partition using gparted if the SD card is over 4GB.
Default user username/password: user/user
Default root username/password: root/root 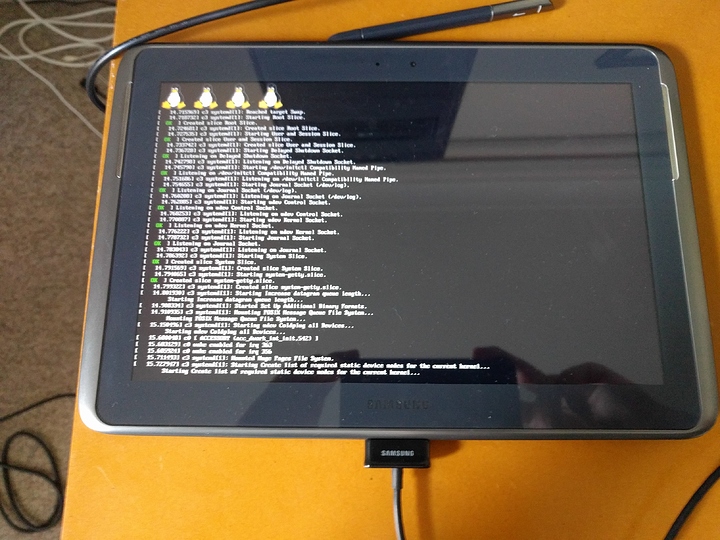 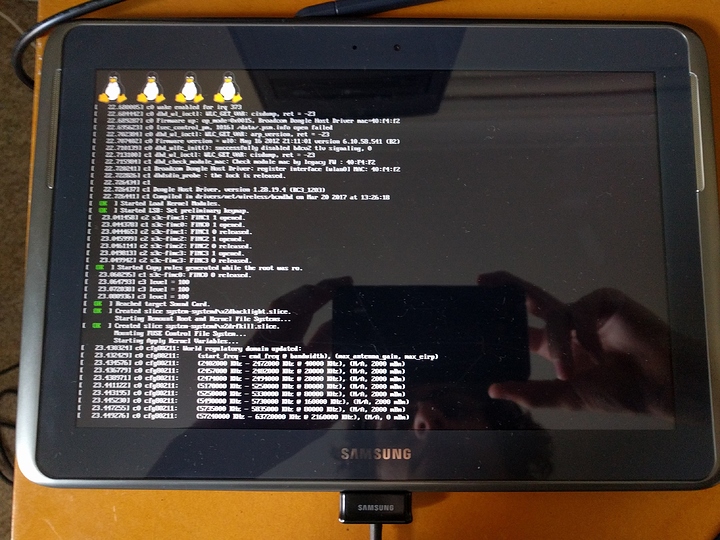 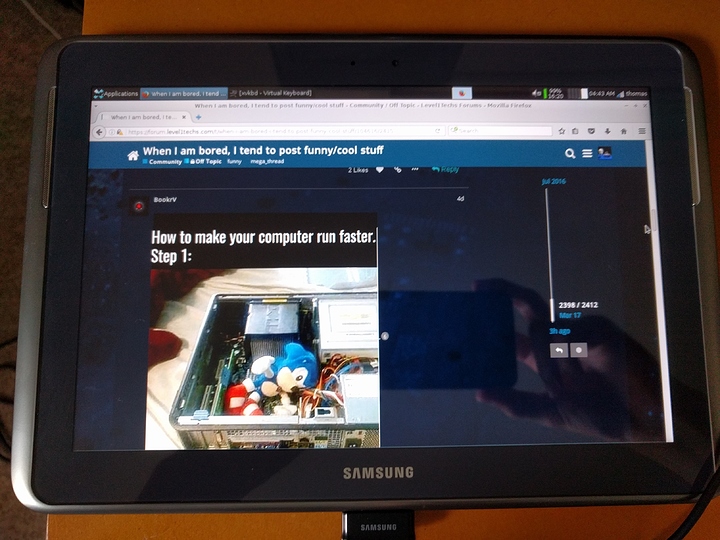 To be fair, Android is technically Linux already.

I'm just being a smartass.

Hey is the old TS wiki still a thing? It should go here

Great tutorial. Finally made it through and am happily running Debian Jessie. Some things I’d recommend:
-“sudo usermod -a -G USERNAME vboxsf” should be “sudo usermod -a USERNAME -G vboxsf”.
-Add to the list of recommended apps to install: lightdm sudo
-Maybe add a warning that if you copy commands in by blocks instead of line by line, the sudo lines will interupt the block if your login times out.

I haven’t yet gotten battery charging/indicator to work. To me it seems like the status read by upower is grabbed at boot and then not updated after that. Any ideas?

And thanks so much for putting this together!

To be fair, Android is technically Linux already.

And at the same time it’s not Linux in the traditional sense.

Actually, xfce4-battery-indicator did in fact change reduce percentage after boot, so somewhere an update is occurring. However, I have not yet been able to get the battery to charge while running Debian.

Great to hear that someone actually did this! and it worked too!
Thought I already put lightdm in there… oops. Added it.
I dont’t think the order of the -G and -a make a difference.
Not sure about the charging thing, sorry.

I got charging to work. Just wasn’t using a charger with enough current.

Any idea about bluetooth? That is my next hurdle. After that is sound.

Haven’t tested Bluetooth, audio works, you just have to select the right output device I think. I’ll have to set it up again to try out.

Unfortunately Bluetooth has so far evaded me. I went back into the XDA thread and configured the firmware files, installed the extra dependencies, and copied the device info from the Android partition, but no joy. I tried both bluez4 and bluez5, but the problem seems earlier than bluez. When I launch blutoothd (the way exception13 does in his thread) it doesn’t seem to register in dbus so bluez can’t find the device. I’m probably going to try one of the pre-compiled images from X-Stranger. Too bad, as I really love the Debian install. Maybe I’ll notice some extra dependencies in his install.

I’ll leave this SD card as-is and keep the image on the Note’s storage so I can switch back to it easily after seeing how well X-Stranger’s Ubuntu release works.

Thanks so much for putting together this guide. I’ve followed it for a rooted GT-N8013 on a Debian Stretch system (not a Jessie system, should I be using a Jessie system for the entire build?).

I’m hoping to be able to build and run picochess on the tablet once it boots,
that would be super convenient to connect to an old USB DGT eBoard, as
the “Acid Ape” android app unfortunately doesn’t seem to be compatible
with my USB DGT board, whereas picochess (at least on Debian Stretch
on an Intel box) runs with the USB DGT eBoard just fine. So at least you
have some idea why I’m trying to get this tablet running Debian (other
than the sheer brilliance of Debian, of course).

But currently I’m running into a kernel panic when I try to boot the GT-N8013.

All of the build steps appear to work correctly (I needed to install
the 32-bit compatibility libraries using apt-get install lib32z1-dev to get the
cross-compiler toolchain working, otherwise it gave me a “file not found” error
if I tried to run any of the executables, and I also needed to edit the file
kernel/timeconst.pl and replace “!defined(@val)” with just “!@val” to get
the kernel to compile to complete properly).

Everything else seemed to go smoothly, and I copied across the recovery.img
to the GT-N8013 and wrote it to the tablet’s recovery partition OK,
and inserted the MicroSD card containing the root filesystem into
the tablet and was able to get the system to at least start booting.

But the messages fly off the screen so fast I can’t even really capture them with my video camera, it just ends up an unreadable blur, although I can make out “kernel panic”.
Is there a way to send the boot messages out so I can read them, so that I could perhaps figure out what I did wrong?

Do I need to do all the build steps on a Debian Jessie system,
rather than on a Debian Stretch system, or does it matter?

I noticed that on Debian Stretch, it isn’t able to transfer fles to the tablet,
so I ended up sending the recovery.img to the tablet by email and checking
the md5 sum. The adb access to the tablet works fine though, including the
“su” part. You might want to mention in the guide that you have to press the
“Grant” on the tablet’s touchscreen at that stage, I wasn’t looking at the tablet
and I hadn’t seen it asking me to grant the “su” access, I thought that once
the tablet was rooted that adb would automatically be given access, silly me.

It seems the explanation for why the recovery partition gets overwritten
whenever the stock Samsung operating system boots on the tablet is here:

It’s apparently due to a file called “recovery-from-boot.p” in the “/system” directory.
The tablet needs to be “rooted” to rename or delete this file, i.e. you need to be able
to su to root.

I recommend you do the build from an older, 32 bit Linux system. Debian Jessie or Ubuntu 14.04 should work the best when compiling an older, 32 bit kernel.
If you do you shouldn’t have to edit any files.

Unfortunately, I only have access to an GT-N8010 though I don’t see why the 8013 should be much different.

I can see how editing something to do with time constants in the kernel could create some problems.

tl;dr try the build from a 32 bit Debian Jessie or Ubuntu 14.04. it should work from there.

Thanks for your advice, I hadn’t thought about needing to do the build on a 32-bit system.
I can do it in a VM, I guess that’s why you mentioned VM earlier in your guide.
I’ll let you know how it does, it might be a few days before I can get do it.

I did the build using a virtual machine with
Debian Jessie 8.10 (netinst) installed in it.
The kernel compilation went through clean with
no errors (no corrections needed, unlike with
my earlier build on Debian Stretch).

I’m still getting what appears to be the same
kernel panic with this kernel, though.

Do I also need to build the root filesystem
(the chroot) on a Jessie system,
or does that make any difference?

Hey everybody,
first I want to say THX for this great guide!
I love to see that there are more people that are not satisfied with the solutions the producers provide. The SGT is an awesome peace of hardware and it keeps laying around as a dust magnet because nobody wants to use Android 4.X anymore.
Installing a linux on this tab creates lovely possibilities!

So, i followed your guide and it worked pretty good (added lightdm and sudo to the install as already mentioned here). Unfortunately the tab is not good usable yet (only cmd works).

I have to admit that I’m not that good at configuring wifi over cmd.
If On-Screen-Keyboard would work I could try to connect the tab via ethernet…

Did someone experience the same problems? Any hints?

N8013? Upload the recovery.img I think @NedRagdnuos is having some trouble getting it to compile.

Did you edit /etc/lighten/lightdm-gtk-greeter.conf? If you did, you should be able to tap the little person in the top right and open the keyboard.

If lightdm isn’t showing up at all, if you can connect a USB keyboard enter the command: sudo systemctl enable lightdm.service.

I will upload a compiled image for @NedRagdnuos in the evening. I will also try to install “iw” on it for testing wireless-modules.

Yes i did manipulate the lightdm-gtk-greeter.conf as you wrote. Doublechecked everything, no typos…

Here’s the link for the recovery.img

7.32 MB of files sent via WeTransfer, the simplest way to send your files around the world