Linux (debian-ProxMox) Recompile needing over 60Gb (and counting) to compile

Hey Everybody! Need a Sanity check.

I’m switching over from ESXi 6.7 to proxmox. One of my VM’s will be running a 5600xt, and will need the navi patch. Also because my MB has RMRR problems, so I’m also having to patch that (simple fix:

outside of that, it’s just a standard Proxmox compilation.

Question is, is it common for kernel compilation to take this much space? I had to LVEXTEND /root to 70gb before it stopped failing due to limited space

is it common for kernel compilation to take this much space? I had to LVEXTEND /root to 70gb before it stopped failing due to limited space

It’s been a while since I built an x86 kernel, but it sounds like too much.

Normally, I’d build openwrt … building entire images takes about 15GB of space, that’s with multiple copies of the tool chain and sources of various things downloaded off the internet and so on.

What build instructions are you following?

Then place both patches in the appropriate folder

Comment out the fourth line from above with a # so that it looks as such:

Save with ctrl-x and y.

To finish up and give your system a nice identifier, edit the Makefile:

Edit the EXTRAVERSION line near the top of the Makefile and add this to the end:

Not sure what’s going on there.

When I get back to my workstation I’ll give the pve kernel rebuild a try to see if I can reproduce.

Hopefully it’s obvious you can just make a directory inside your home directory to build - you don’t have to do it on your root partition.

The proxmox kernel in the git repo above looks like a lightly patched Ubuntu kernel, docs say 15G should be enough… which sounds like much to me.

I wanna say anything over 2g for a non git build is too much.

The kernel is a big project but it’s not that big. Remember the resulting binaries are like 20 to 70 mb

60G sounds like maybe some retry loop gone wrong and a log file filling up the disk.

If you look at the git repo, you’ll notice it also tries building ZFS and some other stuff, it’s not just the kernel, perhaps @Camofelix thought he’s building just the kernel and in fact might be building some minimal userland version of entire proxmox.

Potentially, that does make sense. Spend much more time in the BSD space these days, and I’m not doing tons of Kernel work. Using proxmox to get my feet wet closer to open source virtualization as a stop gap while bhyve matures to the point of being usable.

Yeah, I realize I could have done it in home, it’s just a preference thing. What threw me for a loop(pun fully intended) was the ~62gb of final space it peaked at. most of the extension I have to be able to test stuff in the future, wanted to be one and done with the rebuild.

Question is, is it common for kernel compilation to take this much space? I had to LVEXTEND /root to 70gb before it stopped failing due to limited space

No way, something is broken there. I just double-checked on my Talos II Power9 system and a kernel compile source and output directory is 16 GB. That includes the .git Git repo as well, which is 2.6 GB itself.

And for funsies I ran make -j zImage and make -j modules which ran the load average up to 800 and RAM usage over 100 GiB. Fun! (Note: make -j allows make to launch an unlimited number of parallel jobs.)

@SgtAwesomesauce @zlynx @risk If you guys need any of my patch files let me know! Would love to get to the bottom of this. Now just having to deal with the normal passthrough headaches of VFIO

Dude, if you flex just a little harder, I might just burst a blood vessel…

I’m working on it.

Had to get enough RAM to populate the CPU channels didn’t I?

Honestly, 128 GiB is rarely useful. It often doesn’t even fill up the cache since there just aren’t that many files to store. 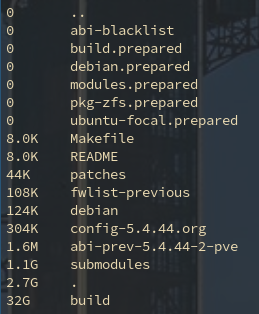 I’m getting the same results.

Not really sure what the hell is going on.

At least the sanity check is in play

I was shocked myself.

Any theories on why?

Not yet. I would have to dig through the makefile.

Not Sure if it’s related to the ballooning compile, but I did notice that I’m experiencing a lot of DMAR faults. not sure if that has to do with the PCRMRR patch, or the navi patch or something else all together.

The web interface locks up completely, tho I can still reset via IPMI.

I’m also having VFIO issues passing through an NVMe drive using the SMI 2263 controller. I’m not sure if its related, and I’ve got a non kernel patch that should work [comment 42], but I’m not sure hot to apply it to a proxmox VM (https://bugzilla.kernel.org/show_bug.cgi?id=202055)