This is a companion discussion topic for the original entry at https://level1techs.com/video/private-video-7

For the Zaif Crypto Heist…
I don’t know a whole lot about crypto currencies, but couldn’t you make those tokens invalid in the block chain and replace them by new tokens to the original owner? Wouldn’t that counteract the theft? because then “stealing” those tokens would be worthless, no?

I guess that would technically even be possible for “real” currencies by marking stolen bank notes as such and getting them out of the market, but it would be pretty easy for a pure digital currency, right?

As for Alex Jones and PayPal shutting him off and Ryans implications about payments… I think the real issue here is that there is no standardised worldwide way of paying with your actual bank account online. Basically if you were able to pay using your real bank account through standardised interface this all wouldn’t be an issue. Because Even if Bank A were to cancel your account you could just go on to the next bank and continue with your life.
Now, I don’t know how the situation is in the US, but in the EU you are obligated by law to have at least a basic account somewhere in the EU. Basically if you don’t have an account anywhere in the EU, banks can not by law deny you an account. They have to give you one if you want and need one.
Now combine that with a standard interface for digital payments and this issue is solved. But currently we don’t have that. There are third party payment tools like PayPal of course, or even credit cards to an extent (because they can be canceled any time), or various regional payment systems (e.g. in germany we have giropay from the German Banking Industry Committee, and paydirekt which is sort of a third party party system backed by the banks), but no single standardised way of paying online.

For some reason, It’s hilarious to me that crypto-currency can be stolen.

Just posting this here because it might be good fodder for the Friday shows: 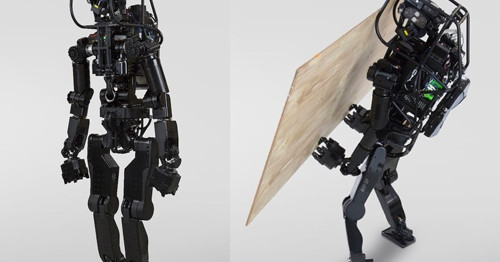 The HRP-5P humanoid robot was built in response to an aging population and labor shortages.

I know L1T likes stories about robots stealing jobs, so here is a Robot from Japan that can install drywall.

Bit late. This weeks news has already been filmed. Maybe next week though

Oh yeah, that’s right. They film this all on like Sunday or Monday and just release it in three parts over the week for non Partreon members.

Oh well. I just wanted to throw that one out there,

Does the robot use a Livestrong bracelet for safety?