One of these things in lying

You guys should upload the long video for Patreons to a separate channel, maybe to wendell’s channel. Pretty sure having a long video with few views is going to hurt your main channel.

I will say I like it all chopped up helps not not watch it all at once.

this is actually a very important implication so bear with me, I’ll try to make it funny when I can

The GDPR law coming in place 2018-05-25 already has a similar but different rule regarding hatespeech in social media. Facebook, among other big social media groups managed to modify the law to explicitly exclude Facebook from being responsible from other people posting on your company Facebook account, giving them unfair advantage. You see, it is your company who becomes responsible for censoring hatespeech, doxing, and other shit on your company’s Facebook account. The same goes for LinkedIn. Not for Twitter, though. Because you don’t have your own “page”, it is just a re-tweet. However Twitter also has their own bail-out system to not be responsible for retards Tweeting (because without them, Twitter would cease to exist).

Now GDPR is still better than nothing. Very much better. Except we need to accept the meddling by the big corporate to push for their own agendas. At least for the time being. Once GDPR is in place, the unfair advantage can be written out of the law without repealing it altogether, the good parts specifically. There will be amendments, and I hope the amendments will be reasonable. And the lobby will detach itself, or at least loosen their grip from that law sufficiently for it to happen.

Now, does GDPR also make your company responsible for copyright infringement on your company’s page? YES, YES IT DOES, implicitly so, by putting the content responsibility into your company’s hands, with the pretext of hate-speech being the main cause. Although it isn’t.

So, what is going to happen for the upcoming period of five years is that we are going to see the internet as a public space getting shut down. Because we can’t have nice things. Fucktards won this period. All of the fucktards, all of it. We’ll see about next. But this time around maybe it needs to get shut down so that we can approach it anew, fresh and wiser? Win the next round? Maybe?

Indeed, the current developments in EU are to push the political discussion out of the social media (witch hunt madness), and back into more responsible and trustworthy forums (fact checkable, if not fact checked) which are preferred by the moderate people who still are the grand majority, in spite of occasionally giving in to lower impulses (being exposed to witch-doctored negative behavior therapy).

And in EU, its not like you can just not use internet. Shit is so digitised we are coerced to log in just to work, and keep informed about our daily matters, public and private. Most of us just want to stop being hostages to misinformed and/or crazed fools, and start getting some intelligent quality info instead of unsolicited exposure to other people’s lack of impulse control. And suppressing that unsolicited exposure has just become more important than getting quality info. Because there is just too much of it to not consider it as a health hazard. And all for the economy of it - shit sells. Organized (corporate, government), or anarchic (SJW, alt-right).

Anyways, I do not think it is the end times, just a bumpy ride to the next stop with a different vista.

EDIT: GitHub? They just failed to lobby like Facebook. This is why I believe it is possible to change laws to a better shape. There will always be exclusion by unfair advantage, which will force at least some money to go towards correcting the laws to include advantages to more interests.

When everyone was talking about a movie being made about the equifax thing at the beginning of the show, there already is a movie like that. Fun with Dick and Jane is a 2005 American comedy film directed by Dean Parisot and witten by Judd Apatow and Nicholas Stoller. It Stars Jim Carrey and Téa Leoni and is a remake of the 1977 film of the same name. The story focuses on a married, middle-class couple who resort to robbery when the husband's employer goes bankrupt. Alec Baldwin, Richard Jenkins, Angie Harmon, John Michael Higgins, Richard Burgi, Carlos Jacott, Gloria Garayua and Stephnie Weir also star, and James Whitmore appears in a...

The filter for copyrighted content that EU commission is trying to get through is probably the worst thing since ACTA bill. All small sites like Uloz.to and Fastshare.cz will disappear over night. Everyone else who has enough money will have to migrate to Norway, Switzerland, Ukraine or the other Non-EU states.

It’s so depressing to see Trump is going to support the Copyright Mafia.

One more screw this week.

For the Robo Calls story…

You people always seem to be butthurt because European Laws seem so strict. Well guess what, in germany it’s illegal for businesses to call you without your explicit consent (there are a few tiny exceptions, but generally… you know). Neither my parents nor me ever had a spamcall in the last 25 years.

And if some business is actually stupid enough to do that you can report it and they will find that business, it’s not like finding this is a big deal in the first place. And faking caller-ID? Like that can’t be traced

So… uh. Yeah, maybe some things aren’t so bad in the EU afterall.

It occurs to me that the Chinese social credit thing and this forum essentially share the same underlying principles of merit and privilege.

I’ve linked this before, but I am again reminded of it: 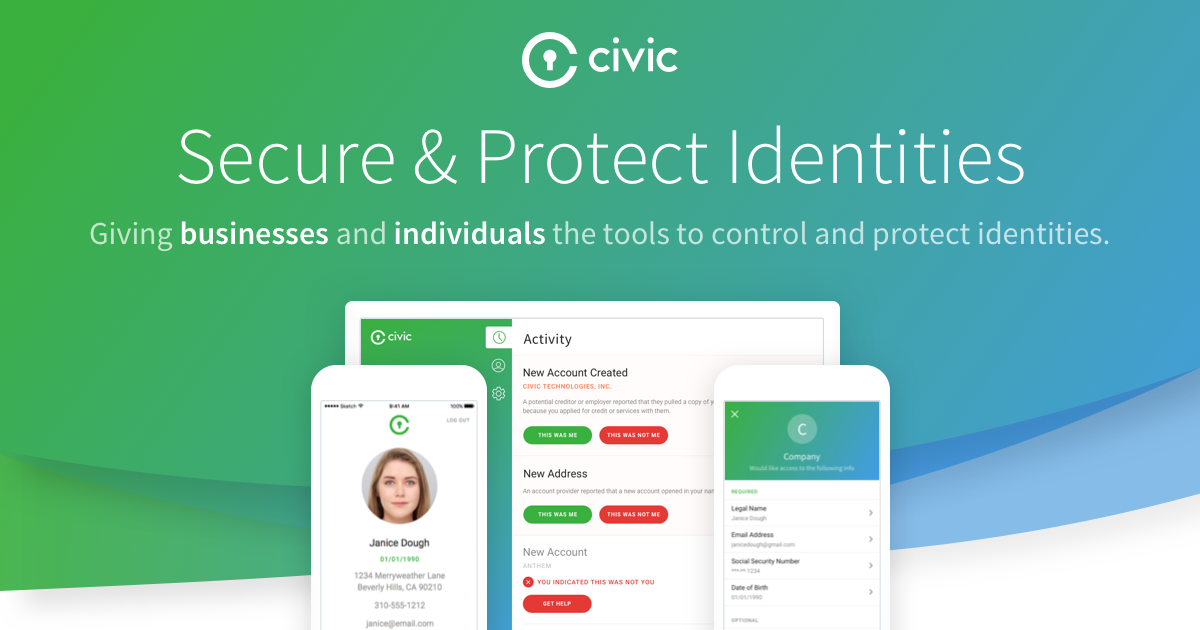 Civic's identity verification and protection tools give both businesses and individuals the power to control and protect their identities through the blockchain.

Equifax…, might be a good name for a puppy!

Unless you buy a compact used vehicle with mid range miles…then you have a chance.

This whole thing about I <3 Radio filing chapter 12 has me thinking just how hypocritical it is for VCs to call ICOs scams. Nothing is more of a scam than a mature public company at growth maximum; and your government will throw money at them for you.