I think its high time we got a steam gaming group We are Level 1 Techs come join us. Play Some games. Be a good and active memeber of our forum. Lets just have some fun

Im kind of spear heading this but mods like @MisteryAngel etc... Im going to definitely put you on admin. @wendell do I have permission to do so. I know we had an old teksyndicate one and it was a pretty good way to find others to game with. I figured Ill slam the logo on too

We currently have the PGP Steam group which is still kinda, sort of, not really (but really maybe) a L1 Steam group.

yeah we've got the PGP steam group.. is there a way to make a group of groups? PGP is kind of level1 unplugged though.
can you add @ryan as an admin? he's grizzle on steam

Got it will do.. Not sure we will have to see

@wendell it seems I don't have @ryan as a friend. Might you be able to get him to friend me.. Heimdallr on steam. Otherwise idk how to get him into the group yet

My question to you would be how do you want us to handle this. I mean we could have the important sites on there. I think I put the store links up etc. But perhaps our news as announcements inside the group.. Idk guess we will have to see where it goes. For one though it would be great to have a directory of all of us for gaming so that it makes it easier to game forum wide.. If you would like if I could find you in steam I could invite you
. Unfortunately it's hard to invite without them being friends however. Anyone can join on the link

Who wants to start a Rocket League team that will decimate all competition?
They can't win if they are too busy laughing at us.

Going well.. Ill be in and out @wendell heres a snapshot of what ive done so far. Anywho I invited grizzly once he joins ill appoint him as high as i can on the perms.. (still figuring them out).. ive also done the liberty of inviting
@NJM1112
@Big_Al_Tech
@Destroyed007
@SoulFallen

and a few others so once its all settled in should gain ground pretty quickly. Ive had thoughts though im not sure what steams policy says specifically but im pretty sure you can announce your videos on it .. maybe not IDK... that and game reviews etc. Though the thought also came across that you probably dont want to fragment content too much either

@MisteryAngel do you have a steam? 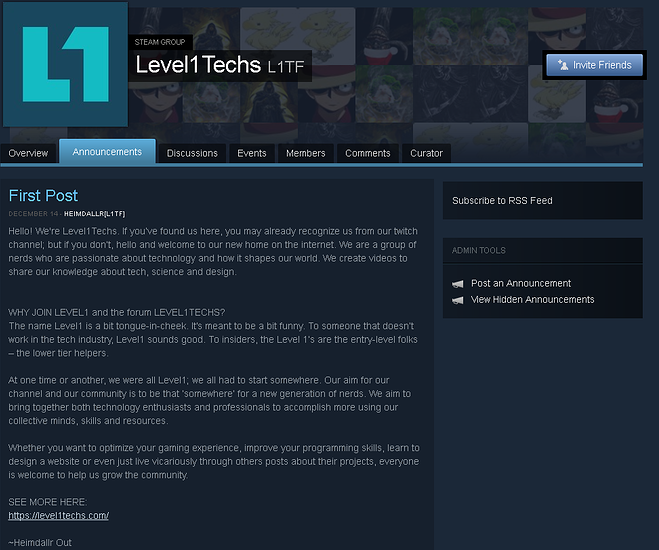 Dont seem to see ya in the list.. try again LOL

I joined through my browser but it did not tell the Steam app.
I should be in there now?

Yeah i do have steam.
But i have not really used that for decades.
But wenn i´m finnished upgrading i will :-p

The only known way to introduce someone as the new admin is to only invite that individual and the founder leave. You might want to do that before you start inviting folks, because it assigns the second oldest member as founder after the original leaves.

Its simple to just give officers the perms too from what i found it will just be a fail over...

I have joined many of these related to YouTube channels and such and they never become really active. I hope it is different for Level One Techs Steam group.

Was just about to post about this issue! Glad to see it's resolved. :) Joined! I play a lot of Dota, and other random stuff feel free to add me! Just let me know you're from Level 1 so I know you're cool. ;)