On May 3rd edition of LvL1Tech, Wendell #2 mentioned Metallica’s -“One” video. The video used for that particular video is called “Johnnie got his gun” about a young man the doctors thought had no feeling or consciousness but he reacted to being touched and voices in the room. Having had his face and limbs blown off all he could do was tap his head and as a good soldier he knew Morse code. “Hes saying kill me, just kill me, over and over again”. I have a copy if you want to feel terrible about the VA, this is a great starter video.

Johnny Got His Gun is originally an anti-war novel written by Dalton Trumbo, FYI. It’s a good read, if difficult at times. 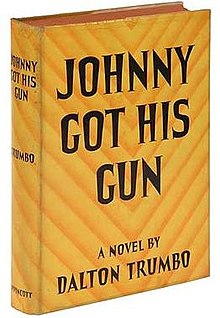 Johnny Got His Gun

Johnny Got His Gun is an anti-war novel written in 1938 by American novelist, and later blacklisted screenwriter, Dalton Trumbo, and published in September 1939 by J. B. Lippincott. The novel won one of the early National Book Awards: the Most Original Book of 1939. A 1971 film adaptation was written for the screen and directed by Trumbo himself. Joe Bonham, a young American soldier serving in World War I, awakens in a hospital bed after being caught in the blast of an exploding artillery shell....

The song by itself stands as an incredible work… but combine it with the video… wow. And live they add in pyro on top of movie footage in the background which just adds a whole level of insanity.