Let's *Rice Together, Show Us Your Desktops!

Let's all follow a simple format, such as this one:

You can also give the name of certain programs that can't be recognized anymore because you *riced them so much ;)
Feel free to ask for help in your customizations, the configuration file of certain things that caught your eye or contribute by giving help on how to achieve a similar setup as yours... 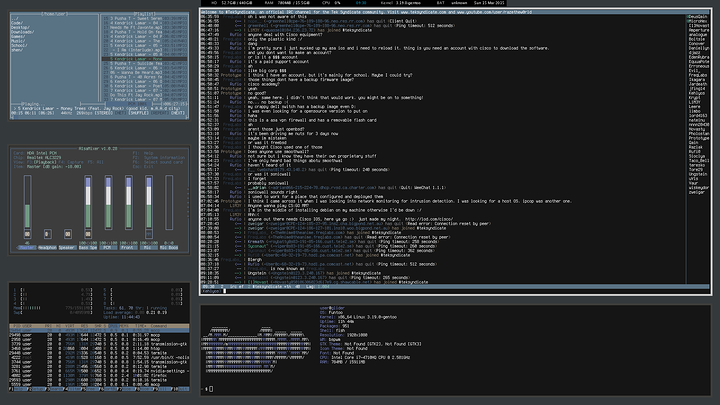 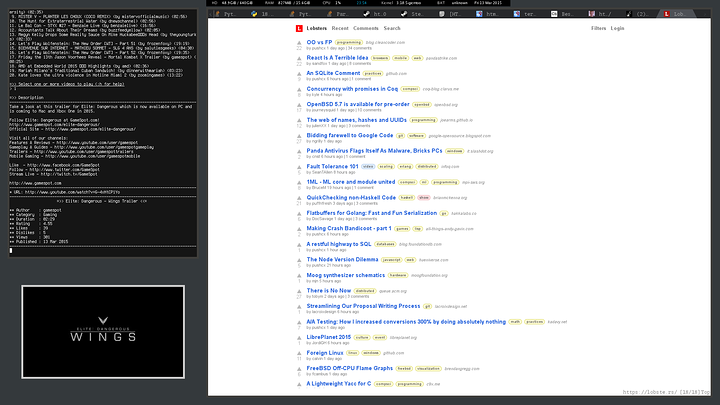 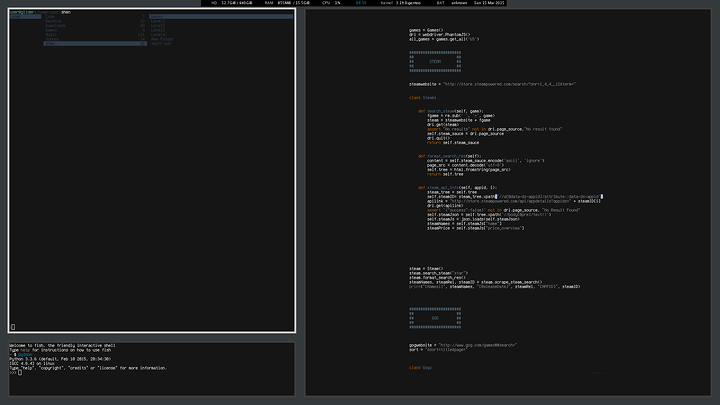 These pics are, of course, on multiple workspaces

The setup is entirely controlled using the keyboard, I only use vermin's (mices) for gaming and for office softwares...

The legend says that this term originated from a Japanese word meaning "the act of taking apart a motorcycle and making it better", somehow, this term made it to the technology-enthusiast/Linux communities and it is now the norm to use the term Ricing.
(The term is probably a big unrecorded troll that originated on a usenet discussion or an IRC chan...)

WM stands for Window Manager and DE for desktop environment

Floating WM's are the one's where you resize stuff by hand and move windows with your mouse, here, have examples: 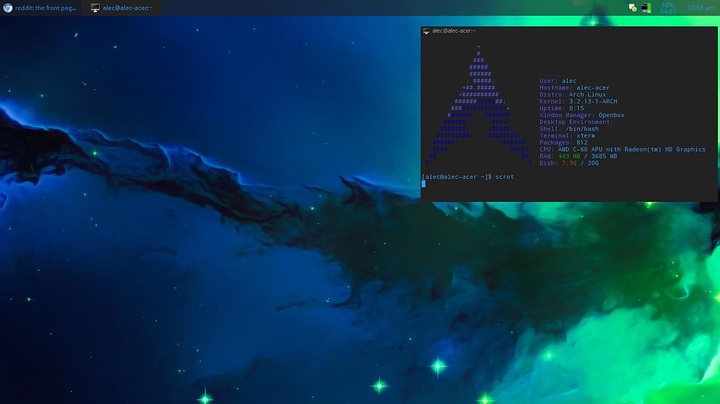 LSpqP.jpg1366x768 55.9 KB
(openbox & openbox)
It's essentially like a DE but with nothing else included than managing windows, every other thing is let to the user's ability to choose...

Their is also the tiling WM's (like the one on my desktop), the windows are just a bunch of non overlapping tiles, they position themselves automatically and from that point you can move them and resize them.
Usually done by using the keyboard, (hjkl and vim bindings are a must) which is a faster way than mocking and fooling around with your mouse.
You can also have gaps between your windows, like most of us do, it feels like you have more screen estate, which is just a pure illusion... 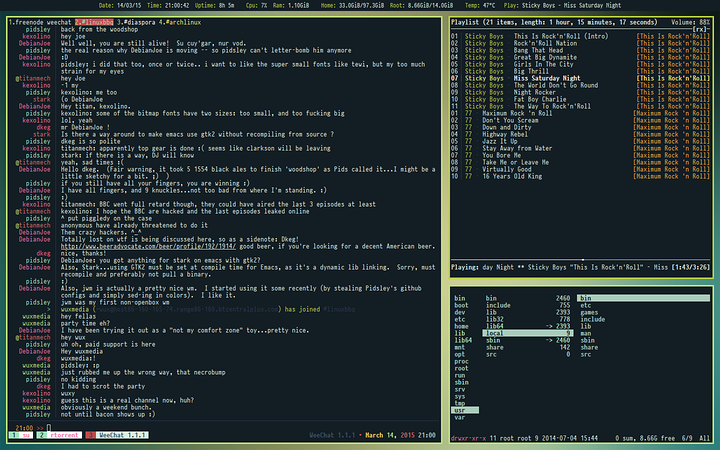 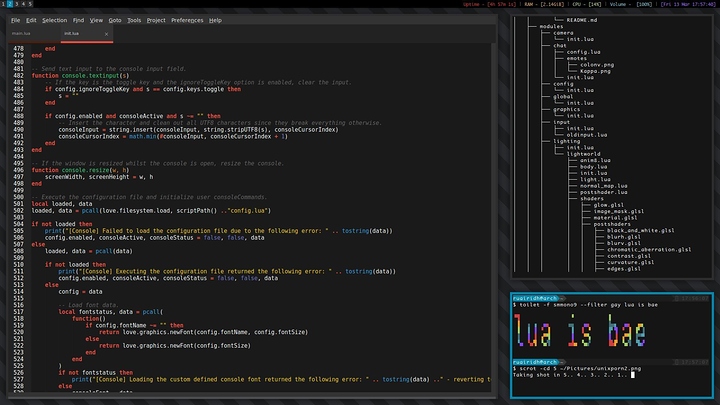 If you want a nerdier/longer list/description of a tiling WM:

In computing, a tiling window manager is a window manager with an organization of the screen into mutually non-overlapping frames, as opposed to the more popular approach of coordinate-based stacking of overlapping objects (windows) that tries to fully emulate the desktop metaphor. The first Xerox Star system (released in 1981) tiled application windows, but allowed dialogs and property windows to overlap. Later, Xerox PARC also developed CEDAR (released in 1982), the first windowing system usi...

(most of the tiling WM's also have a floating mode where you can combine tiling and floating, but why would you want to do that ?) 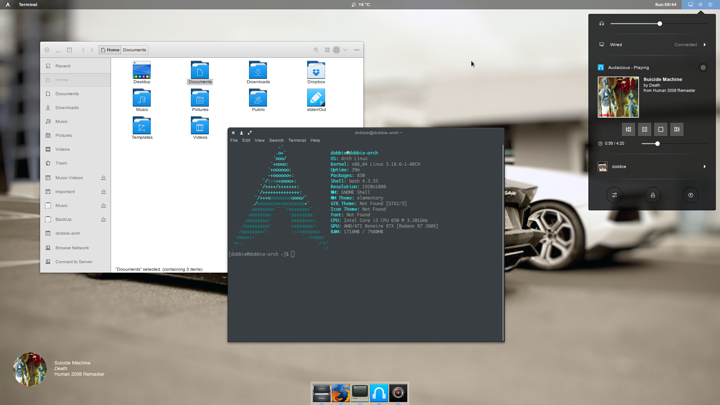 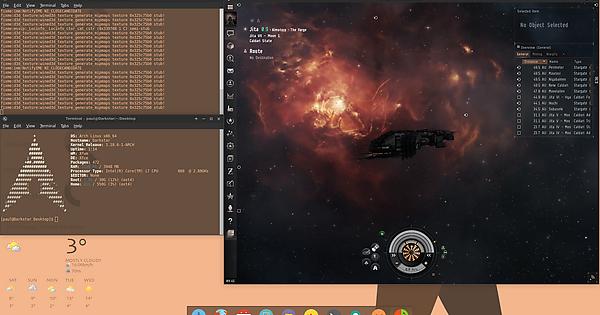 Here's a couple of DE's that I used in order of their "use of resources":
KDE, Gnome, Cinnamon, Mate, Xfce, LXDE

0x003: All Distro's Are Graphically Equal

You can Install all DE's and all WM's on any distribution, any single one of them.
Choosing a distribution by it's looks is a waste of time... But might be attractive for a beginner, even though the sole purpose of being on the Linux Desktop side of things is the ability to choose and configure every damn thing!
Installing on Linux is done with the package manager. An example of package managers are:

The Only Way A Distro Is "More Equal" Then Another Is By Using A better package manager
Better is highly subjective of course and on your Linux journey the definition of better will always change...

Are all GNU/Linux users artists? (always say the GNU, otherwise you end up in flame wars with retarded people). How can they have such a good taste for colors ?
No, most of them are pretty shitty at choosing colors, but we are damn resourceful, if that makes any sense.
To find good color schemes for your terminal, use:
http://terminal.sexy/
Then click on the export button, choose your format and paste the content in your configuration file.

Or you can also use scripts such as this one to have colors matching your wallpaper!
http://charlesleifer.com/blog/using-python-to-generate-awesome-linux-desktop-themes/

For the rest, you can use themes, fonts and icons, all installable using your package manager.

Okay, now that you know what a DE/WM , how to install stuff and find colors, it's time for you to learn how to google, ("Knowing and not doing is not knowing"), then, choose a text editor, edit config files and post your setup. If you need help that can't be solved by a 5 min google search, we are all open and all here to help you.

Respect goes in both ways, being told to RTFM Is not fun. But If you did not read it and/or did not posted what you tried already, you can't complain being told to read it

www.reddit.com/r/unixporn has some nice desktop fap material, let's see what TekSyndicate can do!

It would also be nice to have such a topic "stickied" as Linux desktop customization is probably as old as the X protocol and an activity that many Linux users love, me included. :D

Correcting spelling errors live because that's how I roll, if you caught some, send them to me please :)
If you are confused or do not agree with something I said, be loud and let me know, I like teaching and learning everyday :p

I moved 18 posts to an existing topic: Official Post Your Desktop Screenshot Thread!

Is this not just a Linux only version of this?
https://forum.teksyndicate.com/t/official-post-your-desktop-screenshot-thread/74865?u=kai

Er, can I make a suggestion that everyone post all of that in the thread @Kai linked to? Cause all you're doing is posting your desktop or screenshot of your desktop, which is why that thread is there for. Everyone is welcome to post their Linux screenshot in there. Let me know if you agree that we should move into the other thread.

I'm okay with that