Hello everyone I really need your Help!
About a year ago, I bought a lenovo yoga 500 14inc Lenovo Store It's my poor mans surfacebook ;)

I was pretty happy with it until about a month ago the right screen hinge broke out of the base of the plastic base :( so now its barely usable as a laptop and i have to be really carefull with it, every time i adjust the screen.
And since the lenovo customer service found some contractual loophole to hide behind, they refuse to repair it under warranty :(

So i guess i have to fix it myself :/ 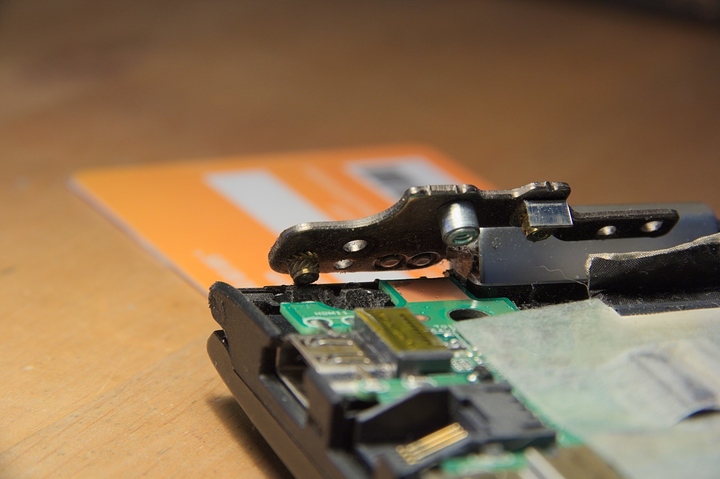 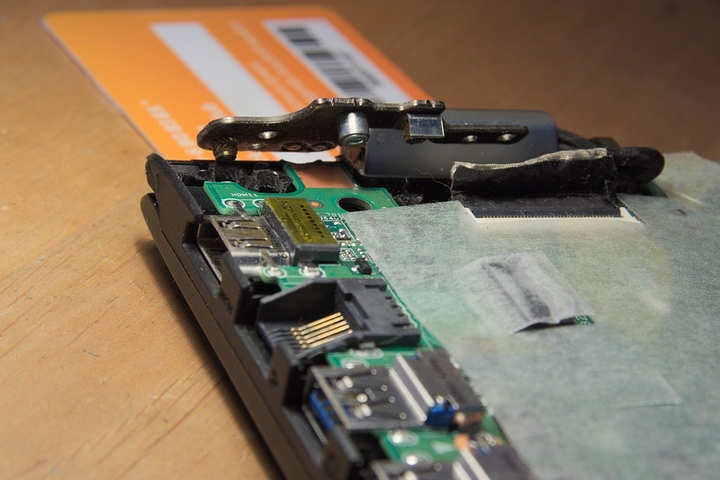 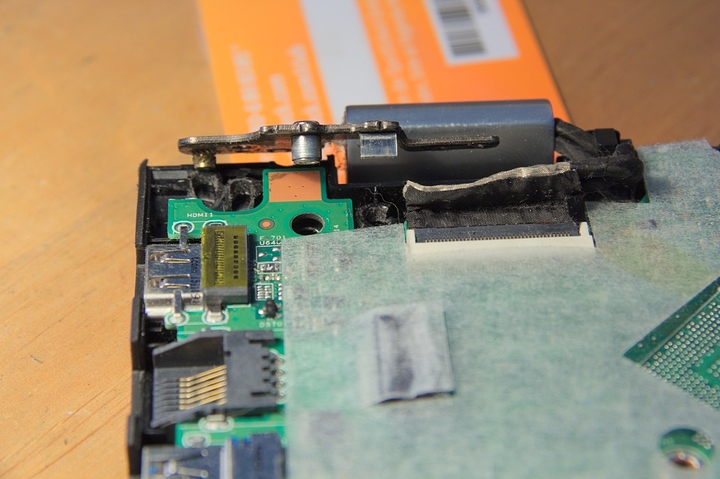 As you can see on the pictures the two nuts, into which the screen was screwed in, broke out of their plastic housing.
My Question is how do i repair it???
I can glue the nut into the back half of the base (provided i can find a glue that sticks to metal and plastic and doesnt melt the plastic. Suggestions??)
But that probably wont be strong enough.
I have to somehow rebuild the part of the socet that broke of or/and support the hinge in some other way, right?
The only thing I've found that might work is this moldable glue that LinusTechTips reviewed a week ago. Do you think this is worth a shot???

I'm greatfull and open for any and all ideas and advice you guys can give me!!!
(and sorry for my not so perfect english)

The only thing I've found that might work is this moldable glue that LinusTechTips reviewed a week ago. Do you think this is worth a shot???

It becomes rubbery not solid, so for your purpose I doubt it will be suitable.

Honestly, how did that happen? I suggested the Yoga 5XX so some friends and colges as solid budget option, and non (not even their kids) so far managed to make that happen.
So did if fall? did you overbend it?

As for a possible fix, some epoxy two component adhesive, preferable with fiber reinforcement COULD help. Find a supplier (automotive, industrial) local to you, they usually have the good adhesive stuff, remove the systems board and than recreat the molding around the metal sockets, let it cure extensively .. like 24h longer than the instructions say and than hope.

But clean the contact points throughly to get rid of any greasy stuff (finger oils, and what not)

how did that happen?

Dunno, I used it pretty extensively (into tablet mode, back into laptop mode because i need the Keyboard...) and sometimes no as carefully as i probably should have

So did if fall?

kind of a few times but never from high up. Mabe there was some kind of production failure.

Thanks for the tip about epoxy. Sounds like a project for the Chrismas holidays and are you shure that the epoxy won't eat/melt the platic??

You should be able to find replacement parts on ebay:

Hi,
2 component epoxy resin should be good for your aplication.
You should go for long curing stuff, like 30 min usage, and 24h curing time.

if your in Europe, i can send you a small amount.

I've been doing repairs on laptops for several years. It looks like the hinge that was mounted is probably too tight on that side. You need to remove it and see if you can loosen it with a set of pliers. If not, you need to order a new set, otherwise you will replace the frame and this will likely happen again. Check it before you put it back; too loose and the mount won't set it position; too tight and you will break it again. Ideally you want it to move with a small amount of pressure.

2 component epoxy resin should be good for your aplication.
You should go for long curing stuff, like 30 min usage, and 24h curing time.

This is a risky idea. I wouldn't recommend this simply because of the mounting plate and how it works; the fact that you have a board in between wouldn't be worth it to me. This seems like it might just cause more damage, especially if you don't have experience doing it.

You should be able to find replacement parts on ebay:

^This is the way you should do it. Just replace the plastic, follow my instructions on the hinges.

but its mounted to the top of the base and not the bottom so that part might be hard to find. In my brief first look I have only spottet bottom covers. So I'll have to do some more research.

if your in Europe, i can send you a small amount.

yes I am living in Munich. A good friend of mine just build something with epoxy (a canoe i think) so i will first see if he has something and then come back to you.
Thanks a lot for the offer

This is a risky idea. I wouldn't recommend this simply because of the mounting plate and how it works; the fact that you have a board in between wouldn't be worth it to me. This seems like it might just cause more damage, especially if you don't have experience doing it.

Thank you all sooo much for all your Help :)

the circuitboard shouldn't actually get damaged by geting resin on it.
It only makes it harder to take it out one day.

The more importaint question is if the resin will stick to the plastic and the metal parts, but if you get good resin like airplane grade stuff (L285 , ....) and if you clean up the parts well, then i don't have any concerns that the resin couldn't withstand the forces and the usage.

But i guess that that are details, only importaint close before execution.

the circuitboard shouldn't actually get damaged by geting resin on it.
It only makes it harder to take it out one day.

Thought so to but I'll just have to test it i guess.

Good perp is always the most important step to enshure Sucess.

Do you have the bit of plastic that broke off from the other side of the metal nut?

I recently had something like this and I used some superglue to fix the nut back in place with the other plastic part,

The only concern is that the hinge would be pulling directly up on this nut, where in my case it wasn't the only thing taking the force.

Do you have the bit of plastic that broke off from the other side of the metal nut?

As I alrady said, and many more mentioned, remove the system board before playing with the epoxy.

By the way, when hunting for parts - Lenovo - one may say and think of their service what one wants, but they at least publish hardware maintenance manuals:
https://www.manualowl.com/m/Lenovo/Yoga-500-14IHW-Laptop/Manual/448498 (could not find it on lenovos site though)

There you can find out the FRU number of the bottom bezel and search e-bay for it;

Excerpt from the HMM: 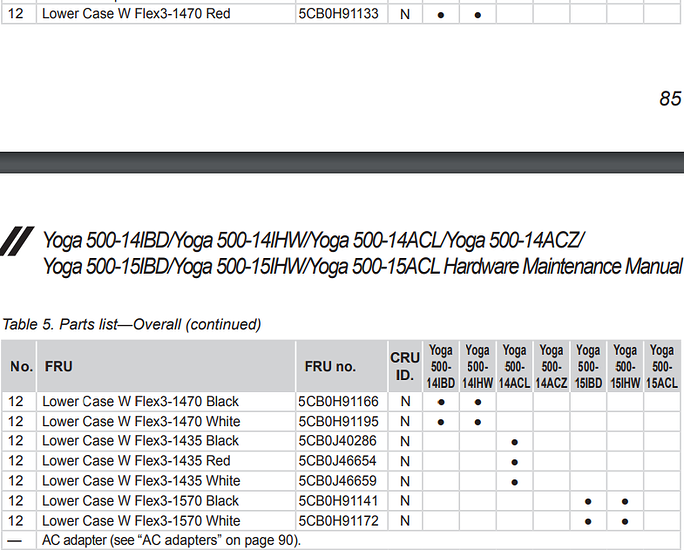 Kinda where I was going with this. My thoughts are if it doesn't work, it might just break off and you're back to square one; or you have a bigger problem.

@yoYoyo
I'm not usre how much you're trying to save here, I mean I would resin it on a older cheaper laptop; but I don't think I would on a unit I cared about.

i have a lot of face into good airplane grade epoxy resin.
In german "Luftfahrt zugelassen" blue hardener and a few other things.
in general, resin for laminating stuff with fiberglas und the like.

I had exactly the same problem, although it seems to me that the matrix was damaged due to damage. No one knows how to check whether the monitor matrix is damaged or not?

Thread closed as it was outside the guidelines for thread revival. Please PM me or another moderator if you feel the thread was closed in error. See the FAQ for more information.

Feel free to create a new thread if you wish to continue this thread’s conversation.