I'm a noob with a dual boot W7 & Ubuntu machine. I went to update my Ubuntu from 14.04 to the latest version and half way through the update it started to come up with errors. I decided to reboot and try again, when the below error came up. I searched the net but couldn't find a solution.

Before the below image appears the grub screen pops up which allows me to choose W7, Ubuntu or Grub. Grub is very weird and doesn't recognize commands such as "sudo" "find /vmlinuz", etc,.

I'm happy to wipe Ubuntu and start again but the I've partitioned the disk, can you please help me with the easiest way to get back into Ubuntu or how to reinstall again. Thanks guys!! 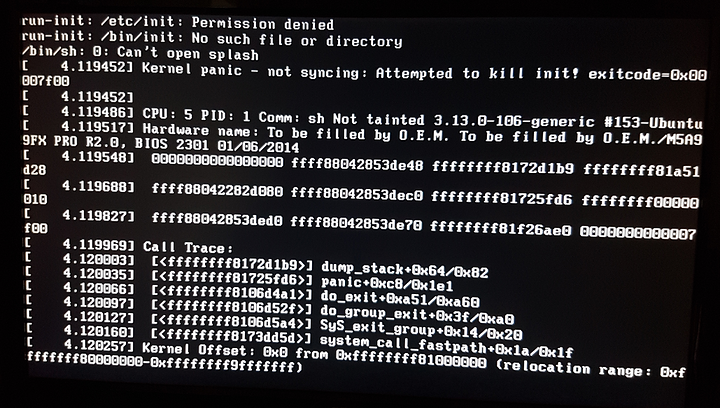 the first and second lines:

you're going to probably need to reinstall Ubuntu unfortunately. It looks like the filesystem got a bit fubar.

your os got ruined when you rebooted after the errors.
Check the errors first so you will know what you are getting into.

Your best bet would be to just reinstall the OS

Grub is not a standard Command line and wont accept commands like that.
The grub commands are enough to tell grub where the os is and how to boot it

Thanks for that guys. I guess reinstalling is the way to go then. What happens to the partitions, is that something I can create again when reinstalling? Sorry about noobish questions.

Without the log from the upgrade, it's going to be hard to tell you exactly what went wrong, but I'd say there was some sort of issue when changing init systems.

14.04 uses upstart, 16.04 uses systemd. It's complex to change init systems and if you're not careful, you can bork your system. Not that there's anything the end user can do about an upgrade like this.

My recommendation in the future is to always upgrade by doing a backup, clean install then restore. Less prone to error, even though it takes longer.

Just in case anyone else was looking for help on this:

I managed to fix the problem by creating a bootable usb with Ubuntu 16.10 on it. When I booted it up it gave me the option to retain all of the stuff on my SSD and update it from 14.04 to 16.10.

The only thing now left now is to figure out how to get the drivers for MSI R9 280x.

R9 280x should be amdgpu and amdgpu-pro.

amdgpu is built into the kernel post 4.0, so I would run the latest 4.x kernel.

amdgpu-pro, there should be a guide on the AMD website.

Your upgrade got borked. I have seen this kind of behavior loosing power during upgrade (laptop with mal seated power connector). Seems impossible to troubleshoot without access to the machine but the upstart-systemd switch could be it. Glad you were able to recover.

Nowadays you can use snapshot enabled installations to recover this kind of situation in minutes. That could be interesting if you want to take the next step. Your options with Ubuntu are zfs (my choice), btrfs, lvm with snapshots, or device mapper with snapshots. The standard installer will not provide the zfs option though. Perhaps you already have btrfs or lvm enabled, depending on your choices when installing initially.

Just look into it. Given enough years and systems to maintain, the day will come you'll have to recover. Snapshots are a good base for backups as well. And this offers great protection against ransomware.

Hey sam_vda, that makes absolute sense. That's something I will definitely be looking to implement or even re-install again with zfs. Thank you!