So this might be a long post, hold on till the end and hopefully it will be worth it...

To prerefrence;
I want to start a discussion about Just Cause 3, bad performance, and what I have done to combat it. Hopefully in the near future Avalanche will release some updates/patches and it will get better, but in the mean time lets talk specifics. Also its super late at night and I'm kind of tired so I apologise in advance if there are various spelling mistakes, sorry. 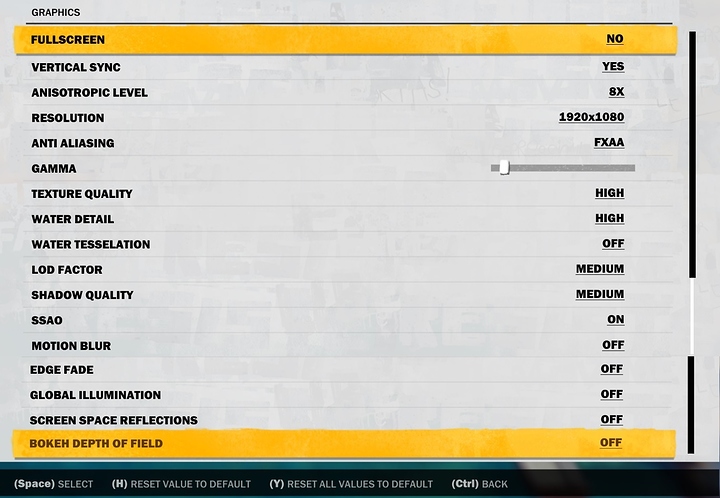 Now lets get to the meat of this post. Lets start with frame rates, for me personally I want a pretty constant 60fps, some quick dips (a second or two) to 30fps when explosions are happening is ok, anything under 45fps with normal play is not. 60fps is what I consider playable, 30fps for me is not an option if you are happy to play at 30 than this post might not be for you.

The stress testing that I have done has been in one of the small towns with a wanted level, enemies attacking me, shooting, grappling, wing suiting ect, this is where I find the game tends to struggle the most, just flying around the map seems to be less taxing on my system. So at in these locations I have learnt to tolerate dips to 50-55fps.

Everything is a compromise between fps, graphical fidelity and resolution. You get to pick two. My setting have basicaly compromised graphical quality in favour of fps. Hence what I have noticed with these settings is that when flying and parachuting there is a bit of pop in, specially with the flowers on the ground, bushes and some trees, but for me I would rather have some pop in and a solid 60 frame rate, and not have to adjust my settings when the game heats up a bit. (that was a bad pun)

Another point a wanted to make is that I don't think its out hardware that's the problem it's optimisation. My GPU usage was anywhere from 60% to 80% with V Sync turned on. When I turned it off the GPU usage when up to 90-99% and I was getting over 70fps, but then I got screen tearing as my monitor is only 60Hz. So V Sync got turned back on.

Now some tips, if your are having trouble, I have found;
- Anisotropic level of above 8x was very taxing and was quite a big hit on fps
- Same with SMAA and SMAA T2X
- LOD factor I think is to do with draw distance quality, (turn this down)
- Edge fade is the same as photo vignetting (no hit on performance)
- Global Illumination seems to be lighting close to Rico (not a large loss of fps but I turned it off)
- Screen space reflections (for me not worth the hit of fps for some reflections on the ground)

In conclusion this PC port is really not very good and I expected better from Avalanche, considering when I first played Just Case 2 I don't remember fiddling with graphics settings at all (man that was a long time ago!). I would love to see/hear the specks you guys are running at the moment, and any other tips you have to find that sweet spot between quality and frame rate. I will update the post with more tips is you guys have them.

Hopefully this was of some use to someone, I know further testing is needed, I just though I would put up a quick post on the forum, as I don't think I'm the only one having problems.

If you have multiple GPU cards, disable SLI in the Nvidia Control Panel helps.
Single GPU performance becomes more consistent, less variable & stutter is gone.
I forced SLI on via AFR and it worked but messed things up. Either it would be fast w/ flicker or 15fps!

Turning off Vsync really helped me.