⛩ Japanese Woodblock Prints, What Do You Know About These?

I love this kind of art. Does anyone have any?

If you don’t know what it is, its essentially a technique of carving wood blocks or wood block sets to then hand print onto paper (usually)

Probably the most recognisable is the great wave 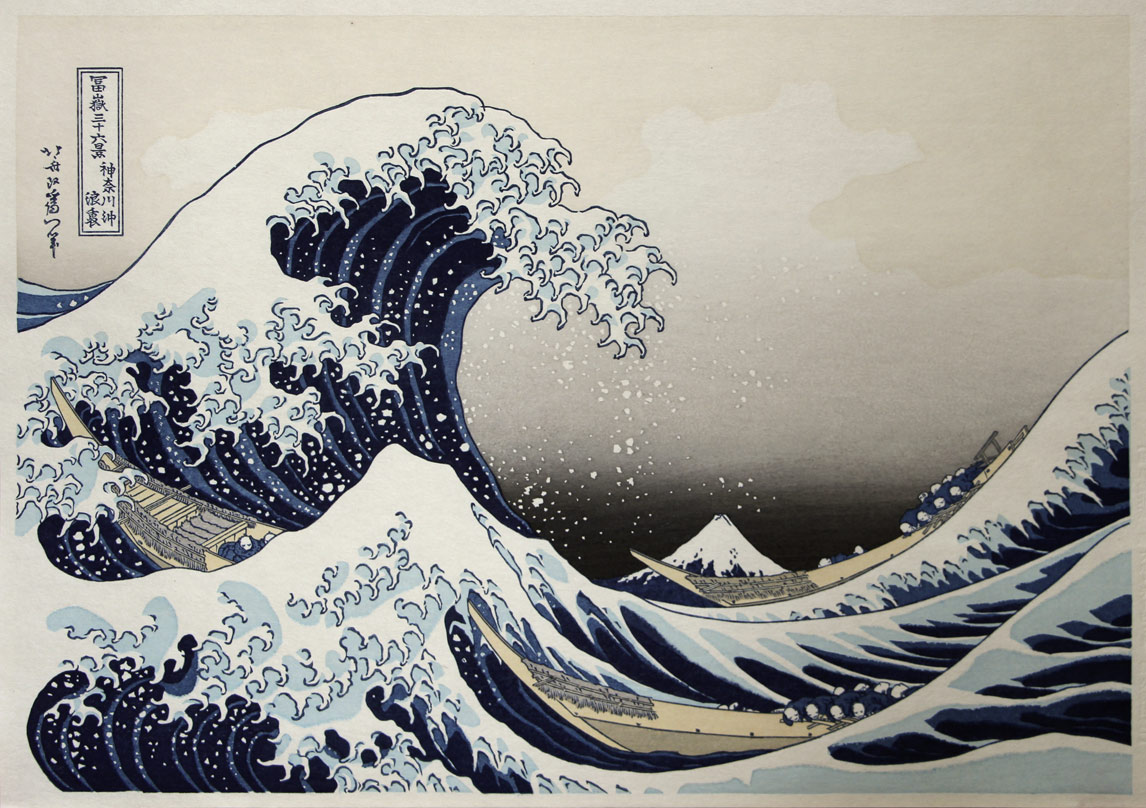 There’s a really good video that goes into some history of a carver and David Bulls (guy in the video) journey to becoming a carver.

This video from Tokyo woodblock printmaker Dave Bull tells the story of his experiences with one of the old carvers - the late Mr. Susumu Ito. It’s a combination of reminiscences and video clips from TV programs of the 1990’s.

I have one small print (not of the wave) in my house. The detail is so good, not only the colours and accuracy in the print, but even the embossing, the individual parts of the print you can feel from the tree branches to the individual snow flakes.

I plan to get the great wave when there are some available.

You see woodblock printing in a lot of different styles across different cultures.

When I hear “woodblock print” I usually think of something that looks more like this: 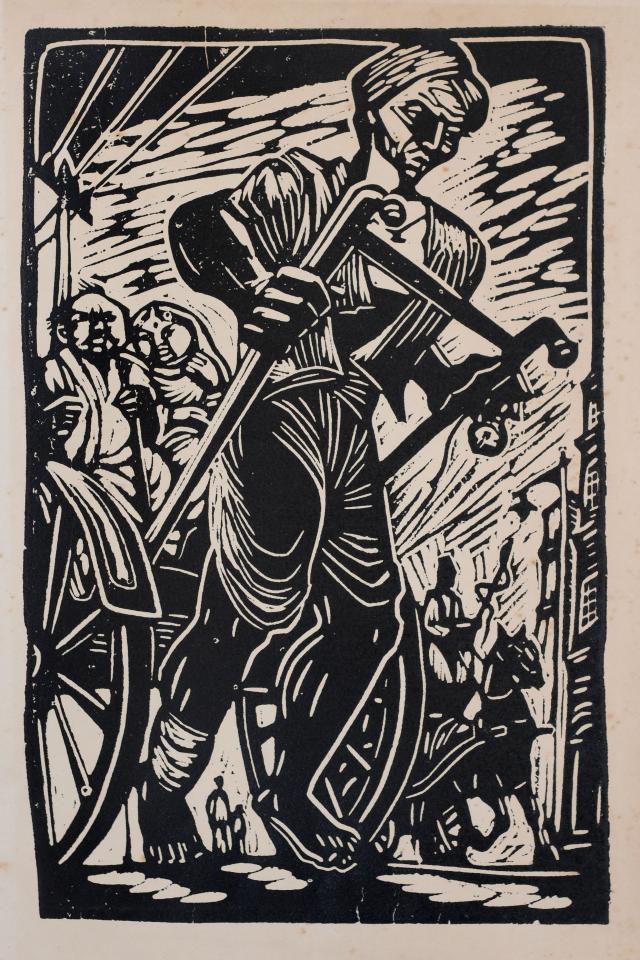 The Japanese made it into a high art, but in the west, it was a cheaper alternative to lithography, so you see it in craft art and early small-scale “mass” production of images. It’s basically just carving a stamp.

That’s not a wood block though it’s a vinyl carving. I did some of this in the past and there’s no reason it can’t be just as intricate, although it is more forgiving as the vinyl flexes more than a straight wood block, plus not having a grain to follow makes it easier on the artist.

You see woodblock printing in a lot of different styles across different cultures.

Yeah, when you look you can see that different cultures have had woodblock style printing but many never seem to have gone further than monochome text or illustration.

Japan seemed to have really taken it to a next level and never stopped.

Which one are you saying is vinyl?

I would argue our claim to fame is probably screen printing.

The one you posted.

It’s interesting as well as the tradition hasn’t changed much in Japan. In Europe for example we have all sorts of this kind of technique, however their engravings on different material mass printed. It’s not quite the same, and again monochrome.

To get the different colours on Japanese woodblocks they use multiple blocks for each colour etc. the technique for applying the right colour in the right place with the right strength and right gradation with just the right amount of pressure is an art in its self.

Forgot my nomenclature, linoleum block is the correct term.

I did just quickly google woodcut to find an image.

It says its a linocut which (according to wikipedia) is a subset of woodcut even though it’s on linoleum. Interesting.

I’ve seen that before, its interesting as while its a nice way to get into the idea of ‘woodblock’ printing, it seems to be a very crude style?

Here’s an American color one. 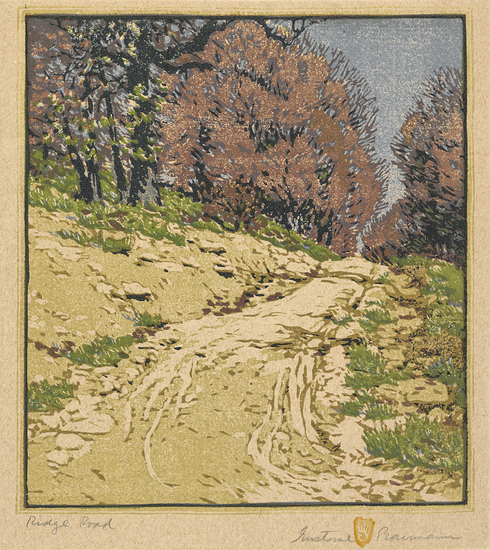 it seems to be a very crude style

I think this makes sense with Japan’s relationship to wood. Culturally, it’s a high art medium, where it typically isn’t in western cultures. The best talent in the west used lithography (or a completely different medium altogether). 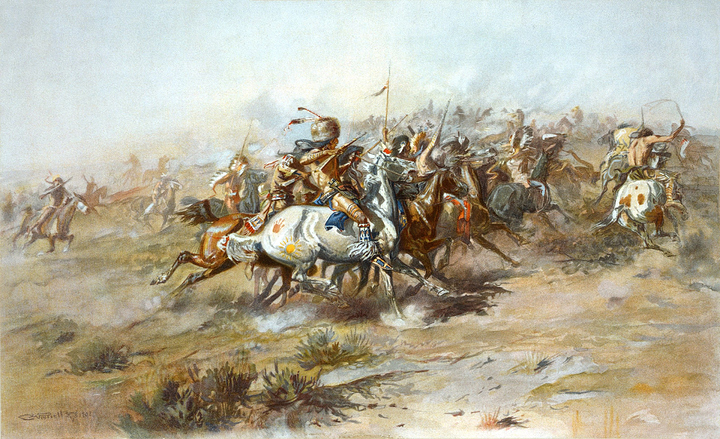 So much uses very similar ideas. One block per colour, multiple printings on the same paper.

But some of the methods are different, stone instead of wood, mechanical machines for printing instead of by hand.

One of the most interesting is that (at least these particular people) they seem to destroy the previous block carvings after each colour print run, choosing to remove them draw the next colour section on the same block. I don’t know why?

From the japaese woodblock perspective they seem to keep separate blocks for each colour, re-carving the blocks after they wear down. Its why there are reproductions today of the great wave for example, where re-carvings of the original design are make (some better than others) only after thousands of prints before new blocks are needed. Maybe these stone blocks are only good for a small number of prints due to how its carved? No idea.

Its good to see though what i think is probably an equivalent of this type of art though a different method.

There’s a program on NHK World that airs whenever they need to fill a 1 hour block for content called “Dive into Ukiyo-E” that covers these as well. 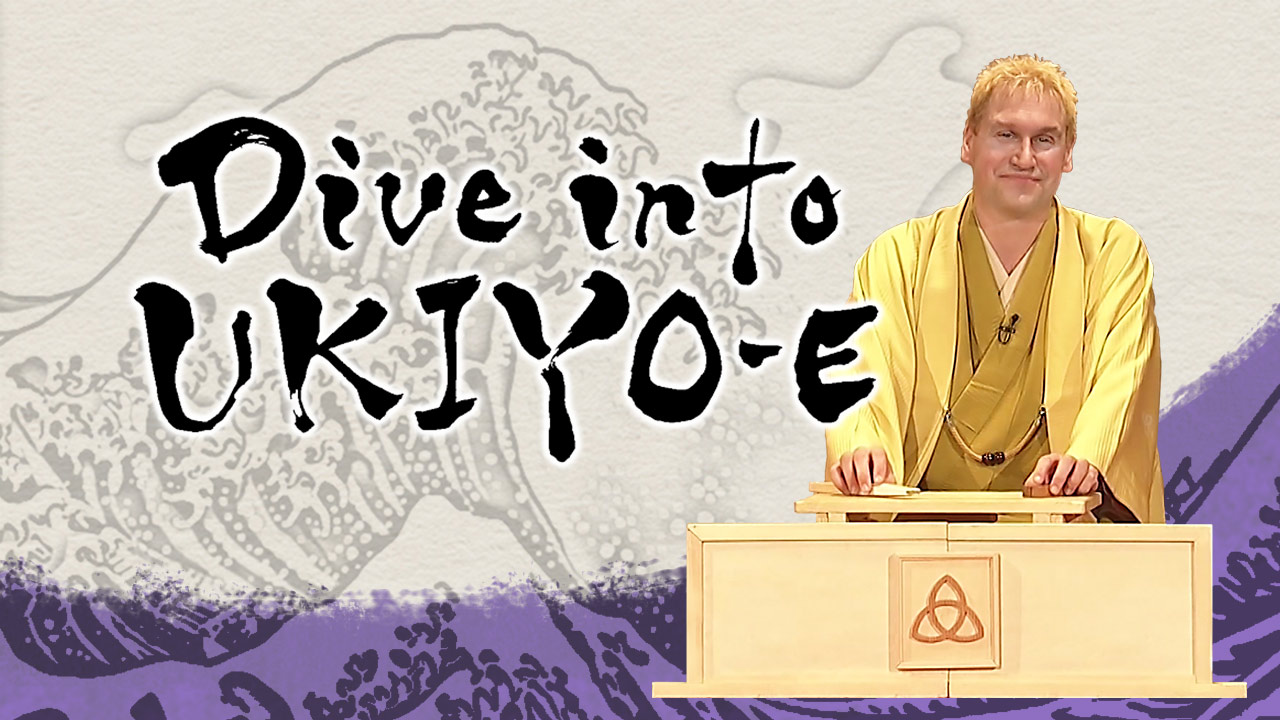 Traditional Japanese woodblock prints called Ukiyo-e flourished during the Edo period in the 18th-19th century. It is said that the unique and outstanding features of Ukiyo-e had impacted internationally renowned artists, particularly impressionists.

It is also available unofficially if you search it on YouTube, but to officially watch it, just catch it whenever the livestream airs it. NHK World is also available over the air as a digital subchannel in some parts of the US. I get it over KBTC-DT.

Its good to see though what i think is probably an equivalent of this type of art though a different method.

“Printmaking” is the umbrella term for all of these. You can still get a masters degree in it.

One block per colour, multiple printings on the same paper.

This is actually pretty inescapable when you have a color image. Even photoshop does this (channels). 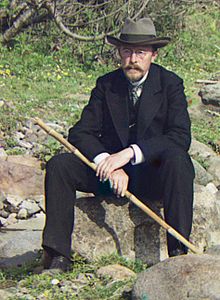 Sergey Mikhaylovich Prokudin-Gorsky (Russian: Серге́й Миха́йлович Проку́дин-Го́рский, listen (help·info); August 30 [O.S. August 18] 1863 – September 27, 1944) was a Russian chemist and photographer. He is best known for his pioneering work in colour photography and his effort to document early 20th-century Russia. Using a railroad-car darkroom provided by Tsar Nicholas II, Prokudin-Gorsky traveled the Russian Empire from around 1909 to 1915 using his three-image colour photography to record it...

Which is exactly how technicolor worked and why it produced the best color film images in its day. 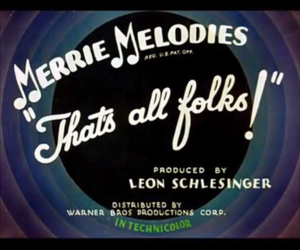 Technicolor is a series of color motion picture processes, the first version dating to 1916, and followed by improved versions over several decades. It was the second major color process, after Britain's Kinemacolor, and the most widely used color process in Hollywood from 1922 to 1952. Technicolor became known and celebrated for its highly saturated color, and was initially most commonly used for filming musicals such as The Wizard of Oz (1939) and Down Argentine Way (1940), costume pictures su...

I believe destroying the blocks is to ensure the value of the printed edition. So art collectors can purchase prints without the risk of more being made later, devaluing them. There could be other reasons though. The stones are like 500lbs so keeping a bunch around isn’t practical.

There was no vinyl in the middle ages, but there was wood. 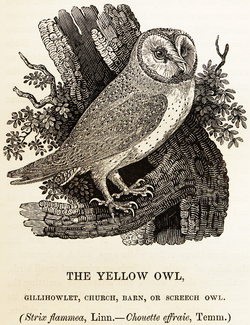 Wood engraving is a printmaking and letterpress printing technique, in which an artist works an image or matrix of images into a block of wood. Functionally a variety of woodcut, it uses relief printing, where the artist applies ink to the face of the block and prints using relatively low pressure. By contrast, ordinary engraving, like etching, uses a metal plate for the matrix, and is printed by the intaglio method, where the ink fills the valleys, the removed areas. As a result, wood engraving...

The German word for it is “Holzstich”, images look like this: 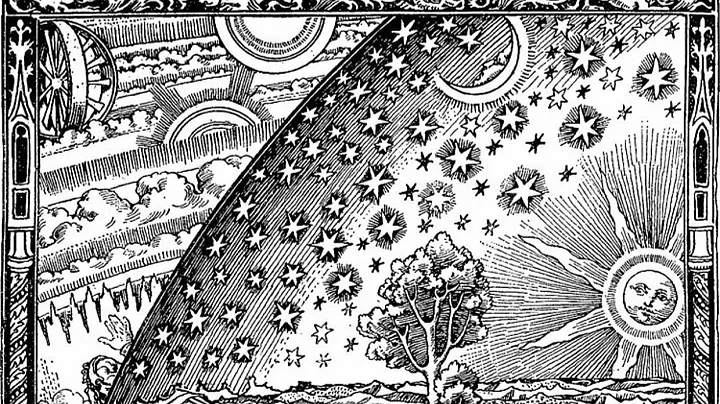 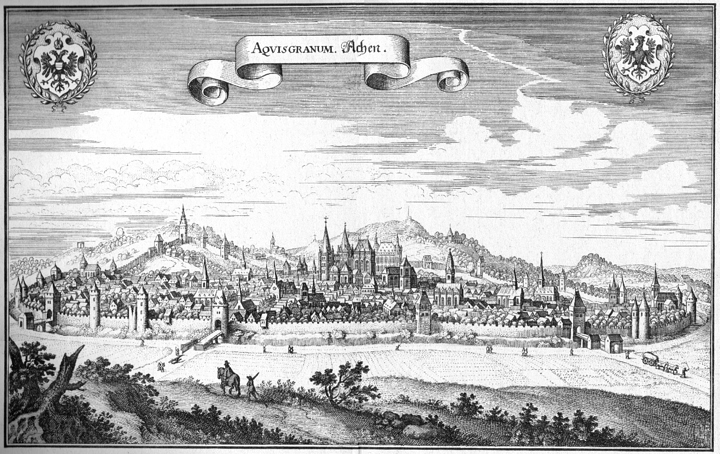 I was talking about American art though, not trying to reference Europe. Sorry if I wasn’t clear.

It’s somewhat confusing. @Steinwerks was replying to me because I posted an American Linotype which is technically a linoleum carving but is also technically a subset of woodcut. He meant linoleum, not vinyl (which he clarified). I had meant to post a more traditional woodcut like yours but googled hastily and posted the Linotype.

In any case, printmaking is a really important step in the progression of media in art history. Printmaking combines the technologies of 2D illustration with 3D relief to create the first reproducible images. Technologically, it is parallel with the printing press.

The printmaking tradition very much leads into photography. The first photograph is chemically etched into metal. 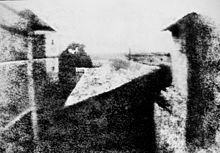 View from the Window at Le Gras

View from the Window at Le Gras is a heliographic image and the oldest surviving camera photograph. It was created by Nicéphore Niépce in 1826 or 1827 at Saint-Loup-de-Varennes, France, and shows parts of the buildings and surrounding countryside of his estate, Le Gras, as seen from a high window. Niépce captured the scene with a camera obscura focused onto a 16.2 cm × 20.2 cm (6.4 in × 8.0 in) pewter plate thinly coated with Bitumen of Judea, a naturally occurring asphalt. The bitumen hardened ...

I believe this is one of his most popular prints: 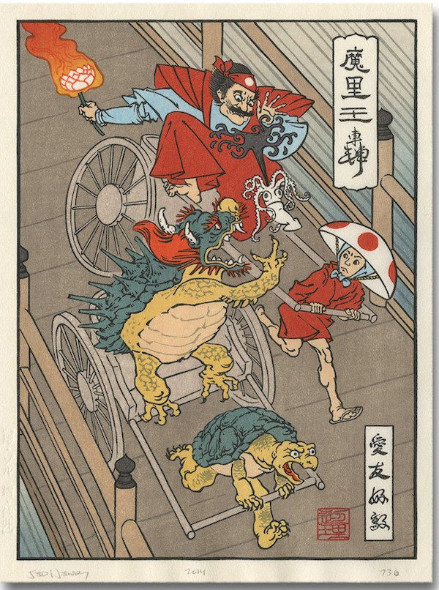 Other than what I’ve seen on his streams I don’t know much about the subject.