Is this Hardware worth PF Sense

I went through my computer bin of forgotten hardware and found an AMD 4600 x2. I was planning on getting a decent nic card for the PCI slots (any recommendations are appreciated). I was also planning around 4gb of ram. Before I dive into the abyss that is installing and setting up PFSense is this hardware even worth doing something like that.

no, it will be depreciated by the pfsense team when they start requiring AES-NI on chip. this will happen 1 or 2 versions down the road.

i found a g4400T , and a cheap board (i had everything else) , and use that for my pfsense setup. 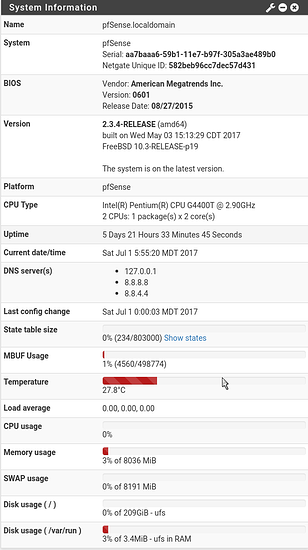 so it has to be an intel chip...that is discouraging. so much for turning any old pc to a router

ok thanks i didnt own the FX chips. Thanks for your input it was insightful

This won't be for several years, 2.4 isn't even out yet and this won't happen (if it even happens) until 2.5 and even then the older version will still be supported for some time.

It also doesn't have to be an Intel chip it just needs to have aes-ni which most chips from the last few years have.

So yeah, it's not going to cost you anything other than whatever a network card costs so give it a go, that hardware will work fine.

will i run into issues being that my home is on a gigabit network is my last concern.

yes i live in south korea with "gigabit" internet. on average im seeing 750+ on my internet speed. is that something i have to take into consideration.

Yeah, I'm not sure if that CPU will be fast enough for gigabit or not, you can still give it a go and find out

Thank you for the input. looking at getting a celeron j1900 if this doesnt work

you will be fine till you can pick up a cheap system with aes ni support.. you'd probably get a year or so out of that system.
its a dual core right? if so should be fine, though gigabit is pushing it.

its kinda of confusing what i should be looking for to not inhibit my gigabit connection. should i try to find a quad core for cheap instead?

Get comfy with the platform on what you have. It'll be fine just know it's not a 5 year solution

well its only going to cost me a nic card and some ram at this point. still cheaper than any router i can buy off the shelf. thanks for the help

Come to find out I had a amd 6400+ which is a dual core 3.2ghz chip. It booted and I put pf sense on an old 2.5 laptop hard drive. All I need now is a decent nic and I'll be diving in. Hope the 3ghz dual core will handle gigabit internet better than what was mentioned before

What about Pentium G3258 Anniv Ed. CPU Will it work for PFSense.?