Is it possible to connect two PCs via Thunderbolt?

I would really like to separate my storage from the main computer, but I don’t want to lose performance… I could set up a 1Gbps network storage, but I’m thinking about something faster… so there is Thunderbolt 3 that provides 40Gbps - it’s fast enough… But is it possible to connect two PCs? If so, is it possible to establish some sort of communication, e.g., socket or IP?

No, it’s not possible. What you might try is buying a USB 3.1 Gen. 2 host cable (which is totally different from a normal USB cable since it’s active) to connect both PCs with a 10Gbit connection. Even a USB 3.0 would be faster than 1Gbit.

Nope, it is not possible.

Actually it is possible, its called Thunderbolt 3 Networking Mode. 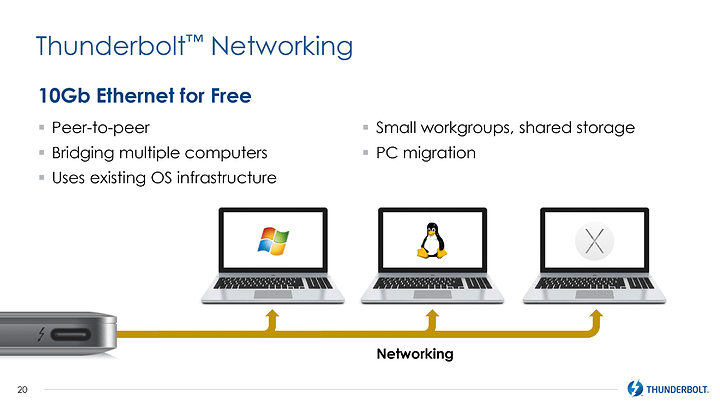 According to the white papers,

After that its just normal Peer to peer networking setup…

You can read the Thunderbolt Networking Whitepages here:
https://thunderbolttechnology.net/sites/default/files/Thunderbolt%E2%84%A2%20Networking%20Bridging%20and%20Routing%20Instructional%20White%20Paper.pdf

This peer to peer networking would allow you to access files on the other computer using a Samba File Sharing(SMB) just like any old NAS but at speeds of 10G.

Apple has their own way of doing this if you want to transfer data from an old Mac to a new Mac, but it’s PROPRIETARY.

That really nice, unfortunately it seems like a way more expensive way of doing 10g Ethernet while not making use of the other 30g of potential bandwidth so has no real advantage.

What’s the distance between your two PCs?

Distance is very short, but one of computers is a laptop so it’s not possible to put there any PCI card.

Hi, sorry for the necro, but this is still one of the top hits on Google.

Did you manage to end up getting it to work?
Have a TB3 laptop and a NUC, just wondering about the latency since want to move some code bases onto it and have the laptop compile as the CPU is quite a bit stronger. Would be a 1m cable about. Googling, a normal data connection should be 1ms, just wondering in regards to the Windows routing overhead.

I can check with TB3 and TB4, could you desribe what kind of performance tests would help you out?

sorry for the very long time to reply, ended up getting caught up in some work and forgetting about this topic.

Replace the top IP Address with the other machine’s one, as you can see, my LAN is really not that stable sadly.

Don’t care about bandwidth that much, behavior will still stay the same.
You can also make a nice graphic adding a -g at the end of it, though the graph doesn’t stop when the test stops.

Sorry it took me so long to test it, looked at:

Short answer: As long as you go wired there doesn’t seem to be much difference… (?)